Personal names among the Indian nations east of the Mississippi River were quite different from European names. There was little concern for maintaining family wealth through inheritance and thus there were no surnames. The process of naming an individual varied greatly among the tribes, but the names tended to be personal, reflecting the attributes of the individual. 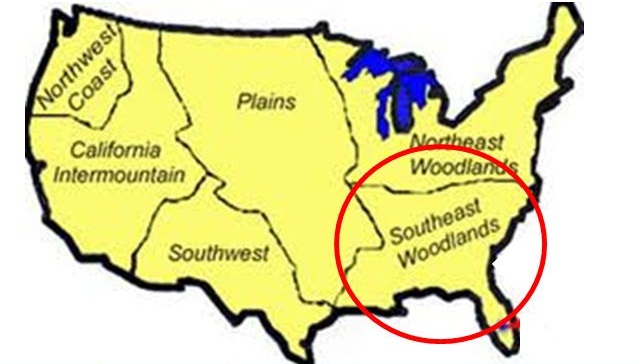 The Southeastern Woodlands is an area bounded by the Ozark-Ouachita Highlands of Arkansas and Missouri and the dry plains of eastern Texas on the west and the low plateaus of Kentucky and Tennessee and the interior plains of Illinois on the north. The eastern boundary is the Atlantic Ocean and southern boundary is the Gulf of Mexico. The Southeastern Culture Area includes the present states of Georgia, Florida, South Carolina, western North Carolina, Alabama, Mississippi, Louisiana, southern and eastern Arkansas, Tennessee, and the portions of Missouri, Illinois, and Kentucky that border the Mississippi River. Prior to European contact nearly two million Indian people lived in this area. The Southeastern Culture Area was the home of skilled farmers who lived in permanent villages.

Five of the Southeastern Indian nations – Cherokee, Chickasaw, Choctaw, Creek, and Seminole – are sometimes called the “five Civilized Tribes”. The designation “civilized” is an indication that they had acquired many elements of European cultures and were the most acculturated Indian tribes during the nineteenth century.

The designation “Creek” is a European concept which emerged during the eighteenth century to designate the Indian people who were living along the creeks and rivers in Alabama, Georgia, and northern Florida. While these people have a cultural continuity which reaches back to the mound building cultures of this area, the concept of a Creek “Nation” or “Confederacy” is something which did not emerge until after the European invasion. In reality, the Creek were several autonomous groups. They can be viewed as a confederacy made up of several ethnic and linguistic groups, including the Alabama, Apalachee, Chickasaw, Choctaw, Hitchiti, Koasati, Natchez, Shawnee, Tunic, Yamasee, and Yuchi.

Among the Creek, a man would pass through four stages of life which are analogous with the seasons of the year. First, a male child, in the springtime of his life, would receive an infant’s name and was educated by his elders. This first name might be something like “little rabbit” or “smells of urine.” Then, in the summer of his life, the young man was to provide for the people and to defend them against enemies. During this time he would receive a war name. This name marks the transition from boy to man. Creek chief George Washington Grayson wrote:

“This name the young men are very proud of, since by it they are boys no longer, but men, ever hereafter to be so recognized and respected by their acquaintances.”

During the autumn of his life, he was to serve as a leader, advisor, or spokesman of the people. Finally, in the winter of his life, he would return to his village and clan, closing the cycle by passing on to a new generation all of his wisdom, knowledge, and history.

Unlike the boys, a Creek girl would usually retain her name throughout her life.

The Northeastern Woodlands is a land of heavily forested rolling hills and rounded mountains, salt marshes of waving grass, calm lakes, tumbling brooks, surf-beaten beaches, and rocky coves. Archaeologists report that Indian people have inhabited this area for more than 10,000 years. About 4,000 years ago the people living in this area began to adopt agriculture. By the time of the European invasion, most of the Indian people of the Northeast got most of their calories from the crops which they raised. The three most important crops in the Northeast – corn, beans, squash – were known as the Three Sisters among the Iroquois. The Northeastern Indians raised about 15 different varieties of corn, 60 varieties of beans, and 8 forms of squash.

In the Algonquian tribes names are seen as having power and outsiders – including the Europeans – were kept from knowing a person’s name. When asked directly by Europeans for their names, many Narragansett would simply reply: “I have forget my name.” Instead of personal names, titles were often used by outsiders.

Individuals’ names, among the Algonquians, changed during the course of their lives to symbolize the changes in their personal status. Children were not named at birth, but were named during a public feast some time after birth.

After a period of isolation marking the transition from child to adult, the Narragansett were given new names. These new names would often reflect the individual’s appearance and/or personality.  These names could be carried for the rest of their lives or until the names no longer suited them.

Among the Virginia Algonquians, children received their first name shortly after birth. Among the Powhatan, a baby boy would receive his first name from his mother. Additional names were later acquired and reflected special merits or abilities. The father of a Powhatan boy would give him a name that would reflect his growing skills as a hunter. When the Powhatan man would do some remarkable act, he would receive a name reflecting that act.

Among most of the tribes, children were not named at birth. Among the Ojibwa, for example, a child was not named for a year or two and, occasionally, a child might be ten or twelve years old before being given a name.  Among the Ojibwa, an elder would be asked to give the child a name. This was not an easy task: the name was expected to be an identity which would later become a reputation. Naming often had strong spiritual significance and could be connected with a dream or vision.

Among the Siouan-speaking Ho-Chunk, the newborn child was immediately given a birth name in accordance with the order of birth. That is, the first male child would be named K’u´nu and the first female child Hi´nu; the second male child He´nu and the second female child Wi´ha; and so on. There were six male birth names and six female birth names. Sometime after birth, the child would be given a clan name at a special feast held for this purpose. In most instances, this name was bestowed upon the child by an elder selected by the father.

Among the Eastern Sioux in Minnesota during the 17th century, boys were usually named after an elder in the father’s family and girls were named after the mother’s family.

Among the Shawnee, a child was first named by an elder from a different clan. This name was publicly announced at a feast given by the parents for their friends and relatives. Later in life, individuals could change their names to obtain better luck. Again, the name would be announced at a special feast.

The Kickapoo child was traditionally named several months after birth. For the first child born to a couple, the father would select the person who gave the name, while the mother would select the person who gave the name to the second child. While the namer generally chose a name belonging to his or her clan, the name must first be validated through a vision. The name would be announced at a public ceremony which would identify the child as member of the Kickapoo Nation.

The mother of a Miami child would summon an old woman to give the child a name. The name would usually come from a dream which revealed the adult traits of the child. Often the name would signify an animal or natural phenomenon which had a relationship to the child’s clan. Later in life, an adult could change a name to avoid illness or misfortune by asking a friend to give a new name in exchange for a gift.

A Potawatomi child would be given a name about a year after birth. This name would be selected from available clan names and would thus connect the child to the clan.