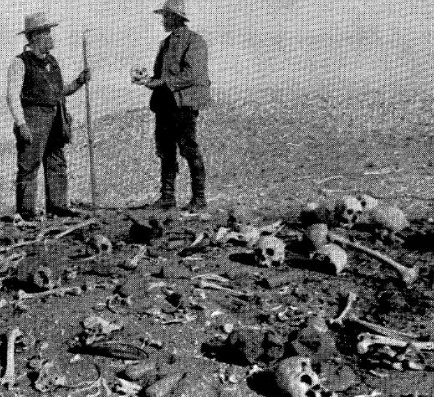 The closest I’ve come to trying to understand genocide, is to imagine the worst, most disgusting, evil, dehumanizing, anti-evolutionary, shameless, insatiable, vile, and incomprehensible thing imaginable – and try multiplying that by infinity.

Genocide (Convention on the Prevention and Punishment of the Crime of Genocide New York, 9 December 1948)

The United Nations Convention on the Prevention and Punishment of the Crime of Genocide defines the term as: Any of the following acts committed with intent to destroy, in whole or in part, a national, ethnic, racial or religious group: (a) Killing members of the group; (b) Causing serious bodily or mental harm to members of the group; (c) Deliberately inflicting on the group conditions of life calculated to bring about its physical destruction in whole or in part; (d) Imposing measures intended to prevent births within the group; (e) Forcibly transferring children of the group to another group. Sri Lanka 12 Oct 1950 (Accession)

This first chapter does not deal with Jewish origins, and neither  does it deal with the prelude to Jewish origins, but rather with a discussion of the Roman genocide of the Jews in the first and second centuries, and why it happened.

Lepers, and other individuals with skin diseases such as acne or psoriasis, were singled out and exterminated throughout Europe. Anyone with leprosy was believed to show an outward sign of a defect of the soul.

The American Indian Holocaust, know as the “500 year war” and the “World’s Longest Holocaust In The History Of Mankind And Loss Of Human Lives.”

Clearly, during the years 1845 to 1850, the British government pursued a policy of mass starvation in Ireland with intent to destroy in substantial part the national, ethnic and racial group commonly known as the Irish People.

The battle of Hamakari Of August 11, 1904 is popularly remembered as a key point in a German policy of genocide against the Herero.

On April 24th 1915, commemorated worldwide by Armenians as Genocide Memorial Day, hundreds of Armenian leaders were murdered in Istanbul after being summoned and gathered.

(Holodomor) in Ukraine 1932-33. A Man-Made Famine raged through Ukraine, the ethnic-Ukrainian region of northern Caucasus (i.e. Kuban), and the lower Volga River region in 1932-33. This resulted in the death of between 7 to 10 million people, mainly Ukrainians. This was instigated by Soviet leader Joseph Stalin and his henchman Lazar Kaganovich.

The Jews who died were not casualties of the fighting that ravaged Europe during World War II. Rather, they were the victims of Germany’s deliberate and systematic attempt to annihilate the entire Jewish population of Europe, a plan Hitler called the “Final Solution” (Endlosung).

The Bible and Zionism

There are over 4 million Palestinian refugees in the Middle East and nearly 70% of all Palestinians are refugees. The mini – holocaust (Palestinian Nakba or catastrophe in Arabic) and the exiling of hundreds of thousands of indigenous people which took place with the creation of the State of Israel in 1948 – established in the name of the Bible(1) is one of the great war crimes of the twentieth century.

The mass killings in Bangladesh (then East Pakistan) in 1971 vie with the annihilation of the Soviet POWs, the holocaust against the Jews, and the genocide in Rwanda as the most concentrated act of genocide in the twentieth century. In an attempt to crush forces seeking independence for East Pakistan, the West Pakistani military regime unleashed a systematic campaign of mass murder which aimed at killing millions of Bengalis, and likely succeeded in doing so.

CHRONOLOGY OF THE YANOMAMI GENOCIDE. The genocide of the Yanomami began in the early 70’s, when the first invasions of the Indian territory by miners were registered. Since

then, about 2,000 Indians were killed. The Brazilian government allowed

this genocide to happen, as shown by the data listed below:

The Cambodian genocide of 1975-1979, in which approximately 1.7 million people lost their lives (21% of the country’s population), was one of the worst human tragedies of the last century.

Despite all public denial of using chemical weapons against the Kurdish civilians in 1988, the Iraqi regime did not deny a campaign it called Anfal.

HOLOCAUST IN KASHMIR. They (Kashmiris ) are being butchered by over 700,000 Indian occupying soldiers stationed there. Still, Kashmiris have not given up to their oppressors. The UN resolutions on Kashmir have yet to be implemented.

Ten army soldiers and 25 civilian militia members killed 177 women and children, including Osorio’s wife and newborn child, who was slashed in half with a machete.

Extensively organized anti-Tamil riots took place in Colombo and South of Sri Lanka. The riots lasted for several days and left over 3,000 Tamils dead and millions of dollars worth of their property were destroyed. Rather than stopping the genocide the Sri Lankan politicians, police, armed forces as well as the Buddhist clergy actively took part in many of the murders and rapes.

Over the night from February 25 to 26, 1992 Armenian armed forces implemented the capture of the Khojali city with support of hard equipment and the personnel of the infantry guards regiment #366 of former Soviet Union.

In early 1996, which is also the 30 year anniversary of the beginning of the worst ethnic cleansing crimes carried out against the Mongols by the Chinese authorities, a book written by Mr. Tumen called Kang Sheng And The False Case of “The New Inner Mongolian People’s Revolutionary Party (NIMPRP)” was published in China.

The sweetly sickening odor of decomposing bodies hung over many parts of Rwanda in July 1994.

The Janjawid have been killing, raping and wounding the civilian population, looting property and livestock and burning villages. This appears to be part of a deliberate strategy of forced displacement.

What feast is toward in thine eternal cell,

That thou so many princes at a shot

Imagine the worst, most disgusting, evil, dehumanizing, anti-evolutionary, shameless, insatiable, vile, and incomprehensible thing imaginable – and try multiplying that by infinity. Now localize it to the United States and remember there isn’t one part of Israel named after Hitler. Yet, there is a Chivington, Colorado. Why does the U.S. keep doing the same thing over and over again in the court rooms? Could it be this?

But this is the solution?

“The Brownback legislation did not authorize or support any claims or settlements from Indians or tribes against the United States.

Campbell believes that any formal federal apology should not incorporate the words ”holocaust” or ”genocide,” since he feels the processes of colonization were complex and that purposeful extermination of Indians wasn’t always the intent of early colonists. He also notes that it’s easy to blame everything on Europeans, ”but the fact is that some of the bad things that were happening were here long before they got here…”

The Colorado resolution specifically mentions the forced removal of the Cherokee Nation in 1838 and the Sand Creek Massacre of between 150 and 200 Indian people – composed of mostly elderly men, women and children – by members of the Colorado Territory militia in 1864. It also notes the many Indian deaths due to disease that were magnified by European conquest.”

I was taught to say, “What can I do to make it right?” in making amends, and the continuing land theft and cultural genocide reaching from the Arctic to across the entire United States is not “making it right.” Specifically, the following are not making it right:

“It’s a horrendous slap in the face after 120 years of injustice to have this kind of ruling come down,” said William Lomax, president of the Native American Finance Officers Association, or NAFOA, a financial management watchdog organization in Phoenix.

“I am disappointed, to say the least,” said lead plaintiff Elouise Cobell, a member of the Blackfeet Nation of Montana.

Concerns are mounting about effects on the water supply of a large-scale hog farm being constructed on the Yankton Sioux Reservation in defiance of a tribal court order.

More than a dozen tribes in the Southwest are suing the Bush administration to stop the expansion of a ski resort in the sacred San Francisco Peaks. The tribes say the use of recycled sewage to make snow at the resort infringes on their religious beliefs.

The town of Sturgis, South Dakota will witness, on Monday, the rare fusion of drunken debauchery, public stripteasing, motorcycle rallying, a live performance by Kid Rock, and – last but not least – a veterans-themed speech by presidential candidate John McCain. Seriously.

And of course, that was right by Bear Butte. So is this.

And to allow Black Water to build within 2 miles of the Butte? A company that services mercenaries in the Mid-East? What kind of insanity is that? Are they mixed up with Haliburton? Has anyone researched that? I want to know. Not from Black Water Brass~ I wouldn’t trust them to tell the truth. Our military keeps too many secrets, which is another reason to keep them from building so close to Mato Paha.”

There is remorse, but there it stops cold when it comes to the land and the cultures that depend on that land.

“The Lord Places People in This or That Country”