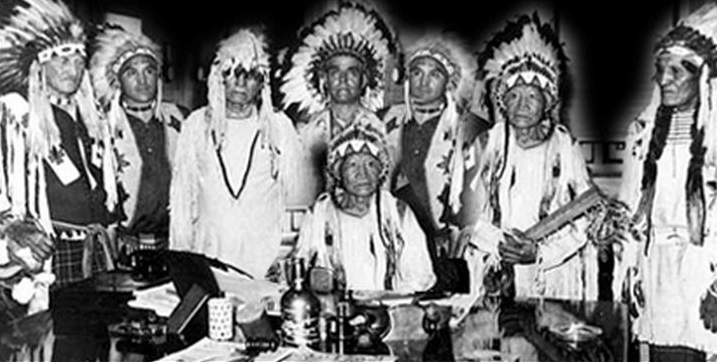 In 1839, the Cherokee in Oklahoma had gathered to create a new government. They adopted the Act of Union which was to be their new constitution. Under this constitution, they then selected John Ross as Principal Chief. However, John Ross had been the leader of the Cherokee who had been force-marched from Georgia to Oklahoma and was known for his opposition to removal. The United States in its foreign policy—Indian tribes are designated as nations by the U.S. Constitution and the Supreme Court, thus fall under the realm of foreign policy—had traditionally opposed any democratically elected leader who has criticized U.S. policy. The U.S. response to this democracy is a blatant attempt to overthrow it, by force of arms if necessary.

In 1840, the Secretary of War directed the army to declare martial law among the Cherokee, to dissolve their government, and to call together all factions of the Cherokee to form a new government. Under the directive, neither John Ross nor William Shorey Coodey would be permitted any voice in the new government.

In Washington, D.C., the John Ross faction, commonly known as the National Party, prepared a memorial to Congress outlining the steps they had taken to re-establish their government in their new home and the difficulties created by the opposing parties and by the military. In response, the House of Representatives adopted a resolution calling for the Secretary of War to provide:   “copies of all orders and instructions issued from the department to any officer of the army, or to any agent of the Government, requiring his interference with the Cherokee Indians in the formation of a government for the regulation of their own internal affairs.”

Before the Secretary of War could respond to the request, the Cherokee opposing John Ross, known as the Treaty Party, filed their own memorial outlining the wrongs imposed upon them by the Ross faction and asking Congress to intervene.  While both President Martin Van Buren and the Secretary of War refused to see John Ross and William Shorey Coodey, they warmly welcomed Stand Watie, John Bell, and William Rogers, all members of the Treaty Party.

The U.S. House of Representatives sided with Ross and charged President Martin Van Buren and the War Department with unjustified interference in Cherokee affairs.

The Cherokee and the United States, the First Decade