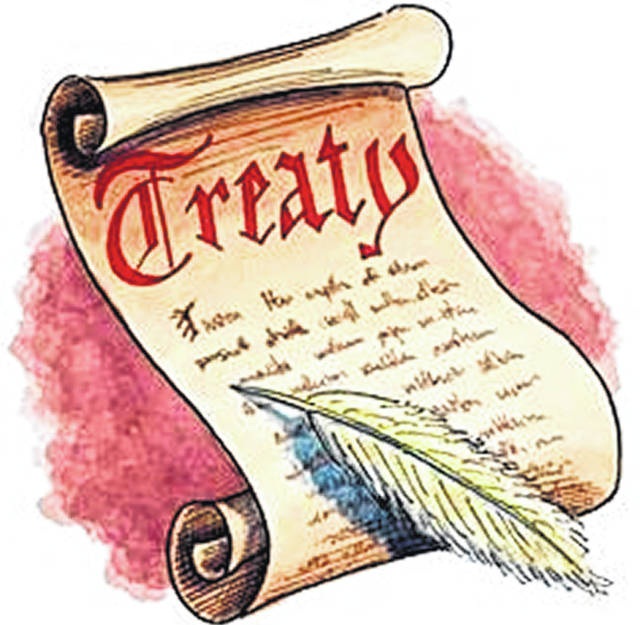 A treaty is an agreement between two or more sovereign nations. Under the U.S. Constitution and the Supreme Court’s interpretation of the Constitution, Indian tribes are legally considered to be nations. During the nineteenth century, the United States government negotiated a number of treaties with Indian nations. While often called “peace treaties,” these treaties were not about ending wars and often they were negotiated with Indian nations considered American allies. While the treaties proclaimed eternal peace between the Indians and the United States, the real purpose of the treaties was to obtain land which could then be given to non-Indian settlers.

In negotiating Indian treaties, American negotiators usually showed great ignorance about American Indian governments and often failed to recognize what really constituted a sovereign nation and what did not.  Since they preferred to deal with fewer tribes, they arbitrarily grouped sovereign entities together and unilaterally declared them to be a single nation. They also preferred to deal with dictatorships rather than democracies and preferred to support and create dictatorships.

In 1837, some 1,200 Chippewa gathered for a treaty conference with the United States in Minnesota. Under the proposed treaty—proposed by the United States, not the Chippewa—the Chippewa were to give up their claim to the St. Croix Valley of Minnesota and their rights to much of northwestern Wisconsin.

The area in question had been over-hunted thus its value to the Chippewa had been reduced.  In addition, the ongoing war between the Chippewa and the Sioux, which had resulted in many Sioux bands migrating out into the Great Plains of the Dakotas, had made the area dangerous for Chippewa hunters.

In exchange for the ceded lands, the Chippewa were to receive annually for 20 years: $9,500 in cash, $19,000 in goods, $3,000 for a blacksmith, $1,000 for farmers, $2,000 in provisions, and $500 in tobacco. In addition, $70,000 was to be paid to traders to “liquidate certain claims against the Indians” and $100,000 to be paid to “the half-breeds of the Chippewa nation.” Chief Flat Mouth protested the payment to the traders arguing that many of the debtors had been killed by the Sioux while on excursions for the traders. He also pointed out that the Americans had taken fish from the lakes and streams and had harvested timber from the woods without paying the Indians. For the United States, however, corporate interests such as those of the trading companies also outweighed any concern for individual interests.

The Treaty with the Chippewa states:  “The privilege of hunting, fishing, and gathering the wild rice, upon the lands, the rivers and the lakes included in the territory ceded, is guaranteed to the Indians, during the pleasure of the President of the United States.”

Chiefs Hole-in-the-Day and La Trappe expressed some concerns about their rights. La Trappe told the Americans: “We wish to hold on to a tree where we get our living, & to reserve the streams where we drink the waters that give us life”

In the treaty, there was no distinction between the various bands. The treaty ignored the political reality of the Chippewa – that they were not a single nation, but are several autonomous bands – and referred to them as a single nation.

Looking for a Home in the 20th Century

The First U.S. Treaties with the Navajo