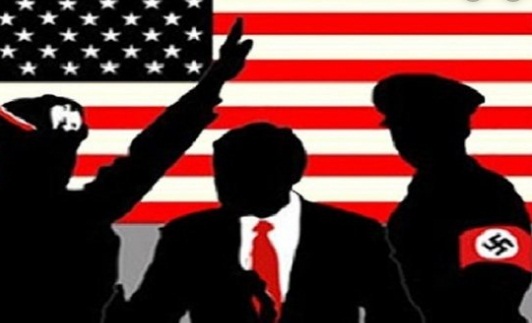 American fascism is the term used by Dr. James Luther Adams, who “was in Germany in 1935 and 1936 and worked with the underground anti-Nazi church.” He said that American fascists would dismantle the open society, using scripture, during “prolonged social instability or a national crisis.” Either of those conditions certainly meets the living conditions on many reservations of their social structure and their Nation. I argue from definition that “Christian fascists” or American fascists are appropriate to be applied to those who christianize Indigenous People as well as to be applied to those who committed  “the slaughters of yesteryear” for the following reasons:

Duncan Campbell Scott, an Indian Affairs Superintendent, created the term “Final Solution;” Christianizing Indigenous People has historically destroyed cultures and languages, an activity still practiced; Baer before the U.N. said, “the international community should begin to view the violation of language rights as a crime against humanity;” and, the fact that Indigenous People exist in the post Extermination stage of genocide, while the general dominant culture practices the post Extermination stage of genocide, which is Denial. To clarify, the word genocide was not created until 1944 by Raphael Lemkin, “The term ‘Final Solution”‘was not coined by the Nazis, but by Indian Affairs Superintendent Duncan Campbell Scott in April of 1910 when he referred to how he envisioned the “Indian Problem” being resolved.” Hence, Christian fascism or American fascism by definition is appropriate when discussing christianizing Indigenous People, and is appropriate to be applied to those who committed “the slaughters of yesteryear” – strictly my own opinion. Lastly, I think both Christian fascism and American fascism should have two categories: violent fascism and non – violent fascism (for the post Extermination stage of genocide) with definitions fitting both categories and used according to the timeline. Let me explain.

I would say that Christian fascists were and are more motivated by Christendom. For example, Columbus’s first voyage in 1492 combined with his religious motivations for making it led Pope Alexander VI to issue a Papal Bull in 1493. Pope Alexander VI ordered Ferdinand and Isabella to observe and to do the following:  that the primary purpose of all future voyages and ensuing discoveries of land and people was to Christianize and “overthrow” any Nations who resisted; that Columbus himself be used for the next voyage, since there was consensus among Columbus, Ferdinand, Isabella, and the Papacy with regards to spreading Christianity to the entire world; that the Indians might have been good converts; that all this was to be carried out “By the Authority of Almighty God;” that it applied to the entire world; that any possible Christian rulers were to not be overthrown; that Ferdinand and Isabella had power over such possible Christian rulers, while the Papacy had power over them and any possible Christian rulers; that overthrown Nations would have a Christian ruler put in place; that anyone who traded with anyone who overthrew a Christian ruler would be excommunicated; and that anyone who went against the Papal Bull would “Incur the wrath of Almighty God.”

From the moment of its birth Christianity had envisioned the end of the world. Saints and theologians differed on many details about the end, but few disagreements were as intense as those concerned with the nature and timing of the events involved…As word of these predictions spread, the most fundamental affairs of both Church and state were affected. And there had been no previous time in human history when ideas were able to circulate further or more rapidly, for it was in the late 1430s that Johann Gutenberg developed the technique of printing with movable type cast in molds. It has been estimated that as many as 20 million books-and an incalculable number of pamphlets and tracts-were produced and distributed in Europe between just 1450 and 1500.”

I think Christian fascists, which could be an international term, have more motivations from Christendom than do American fascists.

American fascists seem to have been conceived when Nazi War Criminals came to the United States after W.W. II, and one can answer the question of whether or not this classifies as the “redemptive violence” required for fascism or not for themself.

“After World War II, countries that were generous in accepting immigrants from war-torn Europe; countries like the United States, Australia, Canada and England, which collectively took in hundreds of thousands of displaced persons, also took in thousands and thousands of people who were implicated in the Shoah and other Nazi crimes. We know that at least hundreds and perhaps thousands of them came to the United States.”

“The morality of the Cold War- anything goes,” states Bill Moyers.

(bold and underline mine)

It was hard, at the time, to take such fantastic rhetoric seriously, especially given the buffoonish quality of those who expounded it. But Adams warned us against the blindness caused by intellectual snobbery.

His critique of the prominent research universities, along with the media, was no less withering. These institutions, self-absorbed, compromised by their close relationship with government and corporations, given enough of the pie to be complacent, were unwilling to deal with the fundamental moral questions and inequities of the age. They had no stomach for a battle that might cost them their prestige and comfort.

“In the event of prolonged social instability or a national crisis,” as Dr. James Luther Adams said, “American fascists, under the guise of religion, (will) rise to dismantle the open society.”  Bullying and violence are not being openly perpetrated on American citizens by the state and the necessary intent is not with it to be applicable for the use of “American fascists” in the context I assume Adams used, which includes “redemptive violence.”

The Anatomy of Fascism

”A form of political behavior marked by obsessive preoccupation with community decline, humiliation or victimhood and by compensatory cults of unity, energy and purity, in which a mass-based party of committed nationalist militants, working in uneasy but effective collaboration with traditional elites, abandons democratic liberties and pursues with redemptive violence and without ethical or legal restraints goals of internal cleansing and external expansion.”

Redemptive violence kept in mind, the lion of the energy crisis is stalking as the invisible line between natural resources and genocide has been made visible by events across the globe. That line and the implications thereof remain invisible to many Americans in the United States on this soil.

So, whether it is best defined as an American fascist or a Christian fascist for historical reasons, this much is certain.

THE DOCTRINE OF FASCISM BENITO MUSSOLINI (1932)

The sins of having allowed evil actions are manifesting. So one last time, whether it is best defined as an American fascist or a Christian fascist for historical reasons, this much is certain.

THE DOCTRINE OF FASCISM BENITO MUSSOLINI (1932)

Furthermore, it’s safe to say that one reason that Holocaust survivors speak to the public is so it doesn’t happen again.

“They came for the teachers first,” he said.

My mind blacked out as I saw the utility of that perverse logic.

He said that it began with bullying; first with forcing Jews to clean the streets with toothbrushes, and when it wasn’t “clean enough,” they stripped the Jews and beat them. He also talked about how all the Jews were given arm bands with the Star of David on them to identify them as Jews, so that among  many other horrendous things,  a curfew could be enforced.

They had to work for free from 7 till 7, and that being out after 7:00 P.M.  was punishable by death. He made that point before he talked about how his father courted his mother – breaking the curfew. His father literally risked his life to court his mother.

His father learned they were exterminating the Jews by following the Nazis from a safe distance to the suspected location after hearing some rumors about it; he’d spoken about the strong sense of community among the Jewish people. His father witnessed some of his Jewish friends and neighbors being stripped, being shot, and being put in a hole in the ground. He said his father couldn’t believe what he was seeing. Seems he also said that because the Nazis ran out of “room” to bury bodies, that bought him and his family some time.

I can’t remember how they protected him (the speaker as a child), seems they made a room for him. It’s coming back to me now.

His father took one brick a day from where he was forced to labor and hid the brick in his pants or coat some way, risking his life. He built a wall with those bricks to hide his family behind for the day when the knock on the door would  come early in the morning at 4 A.M., I believe he said. The speaker’s parents left him with a relative or a neighbor where he’d be safe at some point.

Memory fails, but the last thing I recall is the Holocaust survivor who spoke watched his parents be taken away in a railcar. I cried.