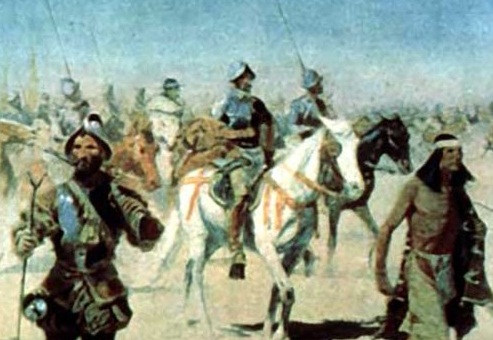 The Great Plains is the huge area in the central portion of the North American continent which stretches from the Canadian provinces in the north, almost to the Gulf of Mexico in the south, from the Rocky Mountains in the west to the Mississippi River in the east. This is an area which contains many different kinds of habitat: flatland, dunes, hills, tablelands, stream valleys, and mountains. It is a dry region and lacks trees except along rivers and streams.  This was not a vacant land when the European invasion began, but a region inhabited by and utilized by many different Native American groups. Along the rivers, there were many American Indian villages whose people raised many different crops, including maize (corn), beans, squash, and sunflowers. There were also nomadic and semi-nomadic hunting and gathering groups whose primary beast of burden was the dog.

The first Europeans to enter the Great Plains were the Spanish who began their initial explorations of the Great Plains of North America in the 1500s. A group of Spaniards under the leadership of Hernando de Soto crossed the Mississippi River and entered what is now Arkansas in 1541. Here they encountered the highly fortified Indian village of Casqui. These Indians were not the horse-mounted buffalo hunters which would be later stereotypes used by movies and textbooks as “Indians,” but rather they were farmers who lived in permanent villages.

The Spanish then turned south, and somewhere on the Great Plains de Soto died. His expedition left a legacy of the torture, mutilation, and killing of thousands of native peoples.

While de Soto’s expedition entered the Great Plains from the east, at the same time Francisco Vásquez de Coronado began his journey north from Mexico seeking the mythical Seven Cities of Cibola. In what is now New Mexico, Coronado was told of the great wealth that was supposedly to the east, on the Great Plains. One Indian slave known as the Turk described the country of Quivira which lay to the northeast and was said to be so filled with gold that even common table service was made of gold and silver.

The Turk was probably a Pawnee who had been captured in war and was a slave in Pecos Pueblo when the Spanish arrived. The Spanish gave him the name El Turco (The Turk) because they thought his headdress looked Turkish. The Turk’s goal was obvious: he wanted to return to his people and by telling the Spanish what they were eager to hear, he felt that they would take him back to his homeland.

Somewhere in the Staked Plains of West Texas, Coronado began to distrust The Turk and had him placed in irons. The Spanish, with another Indian (Ysopete) as their guide, crossed into what is now Kansas. At the Kansas River, the Spanish stopped and sent messengers ahead to summon Tatarrax, the Harrahey chief. When Tatarrax arrived with 200 warriors, The Turk tried to convince him to attack the Spanish. The Spanish responded by strangling The Turk to death.

Most anthropologists feel that the Spanish designation “Harrahey” actually referred to one of the Pawnee tribes. The Pawnee, a Caddoan-speaking people, had migrated north from Texas into northern Oklahoma and southern Kansas at a fairly early date.

The Spanish expedition into the Plains was a dismal failure and the Spanish returned without finding any of the rumored gold. The stories told by The Turk, however, continued to inspire Spanish greed.

In 1601, Juan de Oñate led an expedition of 70 men with ox-drawn carts from New Mexico in search of the fabled land of Quivira in present-day Kansas. While the expedition was not successful, it did encounter Apache and buffalo. The Spanish estimated the population of one Apache hunting camp at 5,000 people. The Apaches were Lipan Apaches who the Spanish called Vaqueros (“Cowboys”). The expedition did not encounter any of the Teyas (Caddo) groups found by Coronado sixty years earlier.  The empty spaces encountered by Oñate seem to suggest that European diseases, such as smallpox, had resulted in massive depopulation.

Using Apache guides, the Spanish arrived at a Wichita village. The Wichita, another Caddoan-speaking group, were an agricultural people who raised corn, beans, and squash. They lived in permanent villages with houses made of grass that looked like large conical haystacks.

One of the prisoners was a young boy that the Spanish called Miguel. He was actually Tonkawa and had been taken captive by the Wichita in north central Oklahoma. The Tonkawa homeland was in Texas and southern Oklahoma.

Somewhere in Kansas, the Spanish had a conflict with an Indian group they called the Escanxaques. The Spanish would later report that they engaged in a 4-5 hour battle with 1,500 Escanxaque warriors. The Spanish, unlike the Indians, had horses and their horses were fully armored, including face masks. As the Spanish soldiers rode into battle they were met by a cloud of arrows. Most of the men and the horses were quickly wounded and the Spanish withdrew from the battle.

While the Spanish were successful in establishing colonies in the Southwest and California, they failed to establish a lasting presence on the Plains. The Plains Indians actively resisted Spanish attempts to convert them to Catholicism and they preferred to trade with the French who came in later and seemed to understand the Indians better.