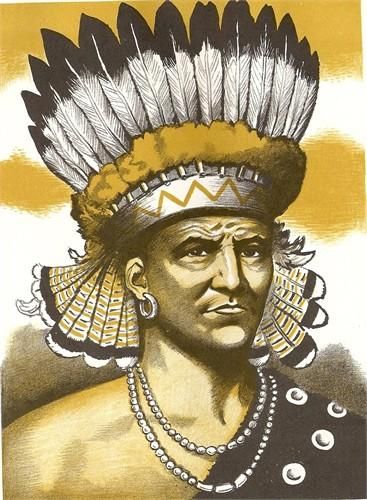 During the first part of the seventeenth century, conflicts and potential conflicts between American Indians and the invading Europeans increased. Enamored with the idea of gaining personal wealth through the exploitation of Indian lands, four European countries—France, England, Netherlands, and Spain—established permanent colonies in the Americas.

The English adopted the concept of vacuum domicilium which meant that if they felt that the lands were “vacant”—lacking land development (meaning fenced fields) and permanent structures (meaning English-style buildings)—then they could be occupied and possessed without any concern for actual Indian ownership or use of the land. From the English viewpoint, only land that is tilled, fenced, and built upon was owned. While surplus Indian crops were important for English survival, the English still viewed the Indians as nomadic hunters who therefore did not own the land.

In Virginia, the English colonists realized that great profit could be made by raising tobacco and the colony began to rapidly expand. In their book The Columbia Guide to American Indians of the Southeast, Theda Perdue and Michael Green report:

“The expansion of Virginia up the rivers that flow into Chesapeake Bay put English colonists into direct territorial competition with the Powhatans because the Virginians looked to Powhatan corn fields as space already cleared for tobacco.”

In Virginia, the English colonial governor decreed that Indians were not to be taught to shoot guns. The decree called for the punishment of death to both the teacher and the student. Theda Perdue and Michael Green write:

“Native Southerners used guns primarily for warfare, not hunting, and groups with guns enjoyed an immediate advantage over groups without them.”

In Virginia, the English colonists set aside 1,000 acres at Henrico for the construction of a college of Indian children. Bobby Wright and William Tierney, in their chapter on higher education in Structured Inequality in the United States: Discussion on the Continuing Significance of Race, Ethnicity, and Gender, point out:

“However, the Virginia natives resisted such cultural intrusions.”

In other words, formal, European-style education had little appeal to the Indians.

In Virginia, the supreme chief of the Powhatan, Wahunsonacock, died and his lame younger brother Itopatin became the new Powhatan. The older brother, Opechancanough, had popular support from the people and there was some struggle for leadership between the two men. At this time, the Powhatan were a confederacy of about 30 tribes and were a major political, military, and economic power.

In France, Samuel de Champlain proposed to the Chamber of Commerce that 300 families and 300 soldiers establish an agricultural and commercial settlement on the St. Lawrence in Quebec. Historian Matthew Dennis, in his book Cultivating a Landscape of Peace: Iroquois-European Encounters in Seventeenth-Century America, reports:

“Within four years, Champlain believed, the colony would attain self-sufficiency and begin to pay great dividends from its fisheries, forests, mines, fur resources, and farms on the modest investment of the Chamber or the king. In addition, French coffers might be filled by trade with Asia, if a passage to the East was ever located.”

“Not least among the many advantages of Champlain’s colonization plan was the anticipation that countless souls could be redeemed by the Church.”

King Louis XIII announced his approval of the plan. With regard to Champlain’s view of New France, Karen Anderson, in her book Chain Her by One Foot: The Subjugation of Native Women in Seventeenth-Century New France, writes:

“Especially important were the native populations which could be interbred with French settlers to produce a new race of people.”

“The native population had to be tamed, civilized and intermarried with French peasant stock.”