Many religious traditions, but not all, put forth an explanation about what happens after death. There are many religious traditions which claim there is an afterlife of some type, that death is not the end but is a transition. In some cultures the afterlife is seen as being similar to life, while in others there are several afterlife possibilities based on a person’s actions in this life. 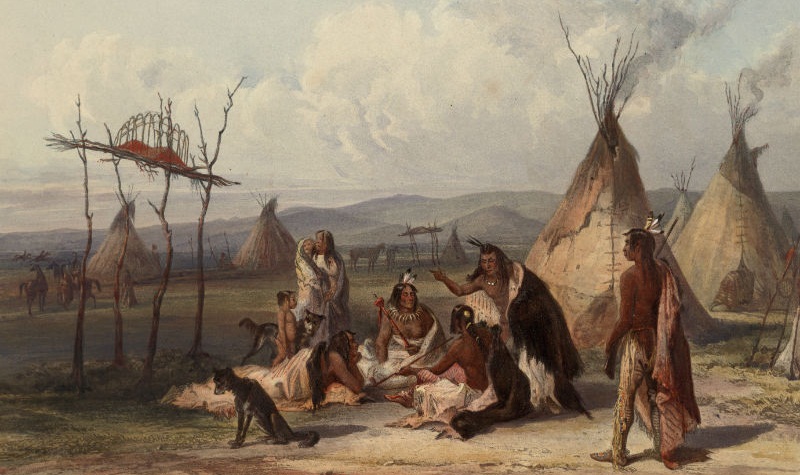 It should be pointed out that in the several hundred distinct American Indian languages, there was no single world which could be translated as “religion.” This does not mean, as many Christian missionaries have assumed, that Indians did not have religion. Rather, it shows that religion was not a separate category of life but was closely integrated with the culture.

At the beginning of the European invasion, there was not a single Native American religion, but rather there were 500 religions. What this means is that it is difficult, if not impossible, to make broad generalizations about traditional American Indian beliefs about death.

One of the other problems or concerns in writing about Indian religions in general, and about traditional Indian concepts of death in particular, is that many of those who recorded these concepts did so through a Christian frame of reference. Many of the books written about Indian religions by non-Indians are really not about traditional religions, but are filtered through Christianity and Christian concepts. Concerning beliefs regarding an afterlife among Plains Indians, Sioux physician Charles Eastman writes:  “The idea of a ‘happy hunting-ground’ is modern and probably borrowed, or invented by the white man.”

For many American Indian cultures, the focus of religion, particularly the ceremonies, was on maintaining harmony with the world. The focus was on living in harmony today, not on death. For many Indians there was an awareness of death and a vague concept of something happening after death, but this was not dogmatic. They felt that they would find out when they die and in the meantime this is something they have no way of knowing anything about and therefore they should not waste time thinking about it.

While the Christian missionaries were fully convinced that all religions must have some concept of heaven and hell, some form of judgment after death, these were alien concepts to most American Indian cultures. The missionaries took this as additional evidence that Indians did not have religion. In their classic 1911 ethnography, The Omaha Tribe, Alice Fletcher and Francis LaFlesche report:  “There does not seem to have been any conception among the Omaha of supernatural rewards or punishments after death.”

Among some of the tribes, such as the Beothuk and the Narragansett, it was felt that communication between the living and the dead was possible. Among the Narragansett, the souls of the dead were able to pass back and forth between the world of the dead and that of the living. The dead could carry messages and warnings to the living. Among the Caddo on the Southern Plains, the living could send messages to their deceased relatives by passing their hands over the body of someone recently deceased, from feet to head, and then over their own body. In this way messages could be sent via the deceased to other dead relatives.

One common theme found in many of the Indian cultures in North America is the idea of reincarnation. The idea that life and death are part of an ongoing cycle is found among many tribes. Sioux writer Charles Eastman reports:  “Many of the Indians believed that one may be born more than once, and there were some who claimed to have full knowledge of a former incarnation.”

In the Northwest Coast area, Gitxsan writer Shirley Muldon reports:  “We believe in reincarnation of people and animals. We believe that the dead can visit this world and that the living can enter the past. We believe that memory survives from generation to generation. Our elders remember the past because they have lived it.”

Among the Lenni Lenape, female elders would carefully examine babies, looking for signs of who the child had been in an earlier life. These signs included keeping the body relaxed and the hands unclenched and reacting favorably to places and things associated with the dead relative. Writing in 1817 about one Lenni Lenape man, Christian missionary John Heckewelder reported:  “He asserted very strange things, of his own supernatural knowledge, which he had obtained not only at the time of his initiation, but at other times, even before he was born. He said he knew that he had lived through two generations; that he had died twice and was born a third time, to live out the then present race, after which he was to die and never more to come to this country again.”

Reincarnation was often viewed as something that happened not just to humans, but to animals as well. Thus, a hunter would thank the animal that had just been harvested so that the soul of the animal would be reborn as an animal with good feelings toward the hunter and would therefore allow its physical form to be harvested again.

The possibility of naming a place after a dead person was unthinkable and would have negative consequences for the soul of the deceased (see: Indians 101: Chief Sealth [Seattle]).

Spirituality and Jimsonweed Among California Indians