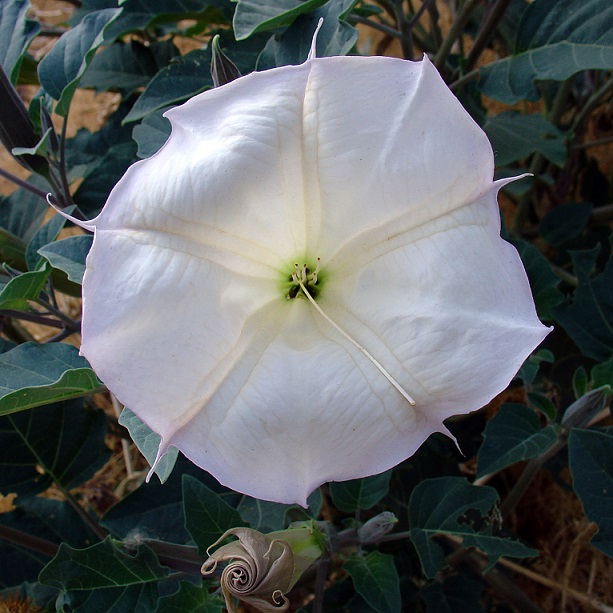 Throughout the world, different religious and spiritual traditions have used hallucinogenic drugs to enhance the mystical experience. These drugs can trigger the experience of flying or floating. In Southern California, many tribes traditionally used jimsonweed (a part of the nightshade family Datura, also known as toloache and datura) to help produce visions. Most frequently this was used during the initiation of boys into full manhood. During this time the initiates would drink an infusion made from jimsonweed root. The visions received at this time would guide people for the rest of their lives. In recognizing the spiritual power of jimsonweed, the tribes also knew that the plant could be deadly if used incorrectly and thus it was used only in ceremonial context and administered by knowledgeable elders. Even with these cautions, there were occasional deaths from using the plant.

Briefly described below are some of ceremonial uses of jimsonweed by California tribes.

One of the major ceremonies of the Luiseño was initiation of boys into the tribe. Alfred Kroeber, in his 1925 book Handbook of the Indians of California, reports:

“The initial and most significant proceeding in the initiation, as the natives see it, is the taking of the Datura drug. This act is call pa’nish mani or mani pa’nish, or simply mani.”

The dried roots of the jimsonweed were pounded into a fine power in a special mortar by one of the ceremonial managers. This powder was then added to hot water and allowed to stand for a while. Alfred Kroeber describes the drinking of the drug:

“The drinking itself, however, was from the mortar in which the plant had been crushed, the boys kneeling before it. The manager held the forehead of each in turn, to pull it back when he had drunk enough.”

After drinking, the boys were led to a small enclosure where they slept under the watchful eyes of a few of the elders.

The boys’ initiation ceremony among the Luiseño is described by Malcom Margolin in his book The Ohlone Way: Indian Life in the San Francisco-Monterey Bay Area:

“Tribal leaders had each initiate purify himself, drink the hallucinogenic drug toloache (Datura), and then dance until unconscious. This often produced a colorful, mystical vision.”

After drinking the Datura, the boys would fast for about six days. This was followed by several weeks of heightened sensitivity during which time the elders would make a sand painting on the ground which represented the entire cosmos. With regard to the sand paintings, English geographer G. Malcolm Lewis, in his chapter in North American Exploration, writes:

“Most of them represented aspects of the celestial world—the Milky Way, selected constellations according to form, the sun and the moon—together with sacred and mythical beings and some specific geographic features.”

Among the Luiseño, the boys initiation ceremony was not an annual event, nor was it determined by season. Rather, when the elders felt that there were enough boys in need of the ceremony, it would be scheduled. In addition, it was generally felt that the drinking of toloache should be done only once.

With regard to the impact of Datura on the boys, Alfred Kroeber writes:

“It produces visions or dreams as well as stupor; and what the boys see in their sleep comes of lifelong intimate sanctity to them. This vision is usually an animal, and at least at times they learn from it a song which they keep as their own.”

“It is certain that a special and individual relation of a supernatural kind is believed to exist forever after between the dreamer and the dream.”

The aboriginal Chumash homeland was in the area of present-day Santa Barbara and on the three closest channel islands.

According to Chumash oral tradition, Momoy was a wealthy widow among the First People. She had the power to see the future and others could share this ability by drinking the water in which she had washed her hands. After a primeval flood, Momoy turned herself into the Datura plant and retained her abilities to see the future.

When a Chumash boy was about eight years old, his mother would carefully make a drink from jimsonweed for him to drink. According to James Adams and Frank Lemos, in an article in News from Native California:

“The dose had to be very carefully administered in order to induce a sacred dream or hallucination.”

The dream received would guide the boy in the future. James Adams and Frank Lemos report:

“The sacred dream helped the boy see his future direction, helped him find a guide, and initiated him into the rites of the tribe.”

From the dream, the boy would then carve a likeness of his guardian spirit in a piece of soapstone.

In many of the California tribes, it was felt that jimsonweed was so powerful that it should be used only once. However, among the Chumash John Baker, in his chapter in Sacred Realms: Essays in Religion, Beliefs, and Society, reports:

“Individuals were allowed to use the plant as often as they saw fit, and they could take it right in their own village.”

John Baker notes that among the Chumash:

“A person who ingested Datura for visionary purposes might do so in order to communicate with the spirit of a beloved person who had died, or to obtain a glimpse of his or her own future. Datura could also be used to locate lost objects.”

The aboriginal homeland of the Tubatulabal was in California’s upper Kern River Valley.

Among the Tubatulabal it was believed that jimsonweed had once been a man who had turned himself into the plant to help the people cure sickness and to help them find spiritual power. According to anthropologist Charles Smith, in his entry on the Tubatulabal in the Handbook of North American Indians:

“No form of worship was attached to the plant or its use. Rather, the plant’s medicinal properties and its use in obtaining supernatural power and longevity were emphasized.”

The traditional homeland of the Kawaiisu was in the Tehachapi Mountains. The Kawaissu language is a part of the Numic sub-family of the larger Uto-Aztecan language family.

Jimsonweed (Datura wrightii Regel) was a significant plant among the Kawaiisu, a non-agricultural people in south central California, because of its hallucinogenic and toxic properties. According to the Kawaiisu, in the Beginning there were four medicines which were given to the people: tobacco, nettles, red ants, and jimsonweed. All of these medicines are used to induce dreams and visions as well as alleviate pain or swelling.

To alleviate the pain of arthritis, the roots of the jimsonweed were mashed and then soaked. The sore limbs were then bathed with this infusion. The infusion was sometimes drunk to help the healing of broken bones.

The drinking of jimsonweed was also done to obtain dreams or visions which could foretell the future. This was generally limited to the winter season as the root was felt to be too strong and dangerous at other times. Both boys and girls would use jimsonweed in their puberty rites.

In gathering jimsonweed for ceremonial use, care was taken to gather only the roots which point eastward as they lie in the ground. The roots were then roasted under hot ashes and shredded. The shredded roots were then placed in a basket which was rimmed with eagle down. Cold water was poured in and the material soaked from sunrise to sunset.

At dawn the participants would wake up and were given luke-warm water to drink. They drank as much as possible, vomited, and then would go back to sleep.

In general, the use of jimsonweed to obtain a vision was done only once in a lifetime.

The  aboriginal territory of  the Yokuts was in central California along the San Joaquin River Valley.

Among the Yokuts, jimsonweed was known as tanai and the boy’s initiation ceremony which used jimsonweed was called tanyuwish (“Jimson weeding”). The ceremony initiated the boys into manhood and tribal status and was conducted when the boys were 12-15 years of age.

For six days prior to the public initiation ceremony, the boys would fast, consuming only a thin acorn soup. During this time, the elder in charge of the ceremony would explain to them the origins of the world and their future in it.

Concerning the use of jimsonweed for the Yokuts boy’s initiation, Alfred Kroeber, in his Handbook of the Indians of California, reports:

“The drug is not only a narcotic but produces visions. This is unquestionably the cause of the tremendous supernatural power ascribed to it, and of its selection as the foundation of an important public ritual. The vision producing effect must also have been enhanced by the preceding period of fasting.”

The jimsonweed roots were crushed and soaked in water for several days prior to the ceremony. At the end of the fasting period, each boy would drink some of the jimsonweed concoction and then be taken to locations outside of the village where they would sleep in the open under the watchful eyes of the elders. Consuming the jimsonweed was felt to give the boys good health, long life, general prosperity, and the ability to dodge arrows in battle.