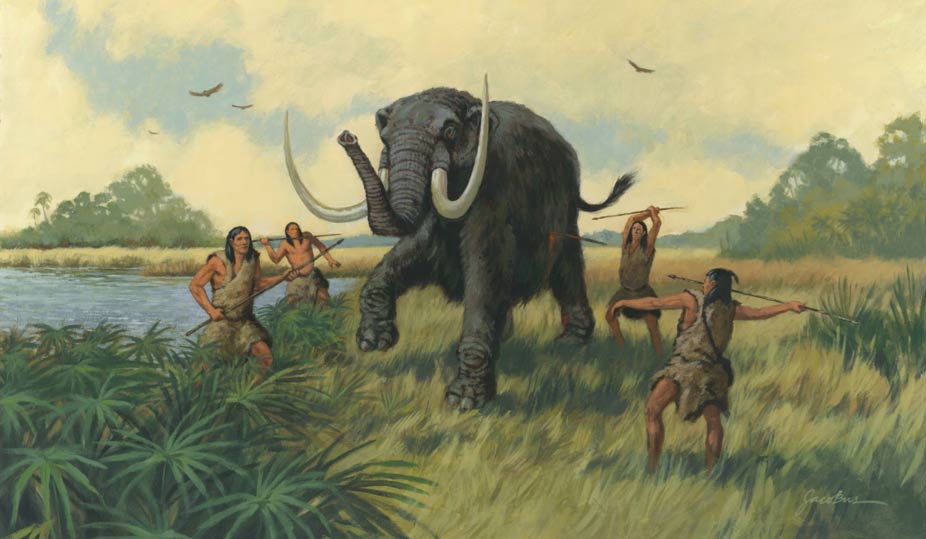 With exciting new finds coming from the OldVero Ice Age Site in Florida which are providing evidence of human occupation 14,000 years ago, this is a good time to review some of the ancient (before 2,000 years ago) archaeological sites in Florida.

By 11,000 BCE, Indian people were living by hunting and gathering in northern Florida and southern Georgia. The sea levels at this time were 350 feet lower than present. This means that the land mass of present-day Florida was much larger. Water sources, particularly those in deep springs, were important for both human habitation and for the animals which they hunt. At this time, the Indians were hunting mastodon, mammoth, horse, camel, and giant land tortoise.

In 10,030 BCE, Indian people at the Little Salt Spring were hunting turtles and the giant land tortoise, Geochelone Crassicutata. The turtles were killed with a stake and then cooked in the shell. These people were also using an oak throwing stick or boomerang. They also had a deer-antler which had its roots and points cut off and 28 parallel notches cut into it. This is one of the earliest examples of counting time in North America.

In 9000 BCE, Indian people near the Wacissa River killed a Bison antiquus.

In 8500 BCE, people living near Mineral Springs buried their dead near the edge of the springs. One was a man, 30-40 years of age, who was 5’4” tall and weighed about 110 pounds. He had worn and abscessed teeth. Another was the body of a middle-aged female. As the sea level rose at the end of the ice age, so did the water within the spring. By the time the skeletons were discovered by archaeologists, they were under water.

In 7500 BCE, the Archaic Period began with an increase in population and new settlements around freshwater sources. The way of life shifted from nomadic to a more settled form. Artist Theodore Morris, in his book Florida’s Lost Tribes, writes:  “With a settled lifestyle and new animals to hunt, different types of stone tools were made. Trade networks, some encompassing much of the Southeast, sprang up.” During this time, Florida’s climate is growing warmer and wetter.

In 7300 BCE, Indian people left a spear at the Little Salt Spring site.

In 6120, Indian people began burying their dead in the Windover Bog Site. While anthropologists managed to obtain DNA samples from some of the bodies at the site, the mtDNA lineages which were found are not present in any contemporary American Indian populations.

In south Florida, Indian people were living on the dune ridges of Horr’s Island by 5000 BCE.

In south Florida, Indian people began building a large mound with layers of white sand, charcoal-stained sand, and oyster shell on Horr’s Island about 2900 BCE. By 2800 BCE Indian people were living in a year-round settlement on Horr’s Island. Their small houses were made from poles and thatch. The conical sand mound reaches about 6 meters high and was used for burials.

Indian people by 2400 BCE were making sea voyages between South America and the coasts of Georgia and Florida.

In 2400 BCE, Indian people at the Summer Haven site (8SJ46) constructed four circular structures. The people who occupied this site were practicing cranial deformation (a deliberate modification of head shape which begins by binding the head of an infant shortly after birth).

In south Florida, Indian people were living on Useppa Island in the Pine Island Sound by 2000 BCE. They were making fiber-tempered pottery.

In 1580 BCE, the Rollings Shell Ring was constructed. It is 7 meters in height (about 23 feet) and 250 meters (825 feet) in diameter. The ring was built up quickly and there are few artifacts within it.

In 1500 BCE, Indian people at the Joseph Reed Shell Ring site (8MT13) were making sand-tempered pottery. This represents one of the earliest intensive uses of pottery in south Florida. According to archaeologists Michael Russo and Gregory Heide, in their chapter in Early Pottery: Technology, Function, Style, and Interaction in the Lower Southeast:  “The pottery at Joseph Reed consists of both sand-tempered and chalky wares at a time when most archaeologists believed these wares were unknown in Florida.”  They go on to report:  “In terms of migration/diffusion, the pottery from Joseph Reed has nowhere to migrate from. It is not tempered with fiber as is the pottery of the site’s nearest contemporaneous pottery-producing neighbors to the north. Thus, a direct connection cannot be made with those neighbors in terms of paste and temper (design and form, however, cannot be ruled out until more data are obtained).”

In 1300 BCE, a type of decorated pottery known as Orange Incised began to appear. Archaeologists note that Orange Incised is similar to the Machalilla pottery found in Ecuador and suggest that this style of pottery diffused northward from South America.

In 1000 BCE, Indian people living along Fisheating Creek were building linear earthworks which were designed to raise living quarters above the floodwaters.

In 1000 BCE, Indian people in the St. Johns River area were making pottery . They were using freshwater sponge spicules in the pottery paste which resulted in a chalky feel. These sponge spicules were an intentional temper which was added during the manufacturing process. The pottery was made with a coiled technique.

People began to occupy a site near the Crystal River in Florida in 537 BCE. The site includes two large temple mounds with ramps, a smaller residential mound, a plaza, and two burial mounds. There appears to have been contact with the Hopewell people in Ohio as evidenced by flint knives and other artifacts.

In 500 BCE, Indian people from the Deptford culture began to occupy the Crystal River site.

In northern Florida, the period which archaeologists call St. Johns I began about 500 BCE. The people were establishing both freshwater and coastal villages. They were also occupying smaller, seasonal camps for fishing and shellfish gathering.

The Timucua began to occupy the sub-tropical areas of Florida about 500 BCE.

The Tequesta were living in the area near present-day Miami, Florida by 500 BCE. They constructed a number of round houses, including a chief’s house or council house, using a post framework.

In 300 BCE, the Crystal River site was established as a ceremonial center. Construction began on Mound F which served as a burial mound. It would eventually rise to a height of 20 feet. About 1,000 people would eventually be buried here.

In 30 BCE, Indian people along the Crystal River began construction of a series of shell mounds which have astronomical alignments. The mounds and stone pillars can be used to observe the solstices and equinoxes.