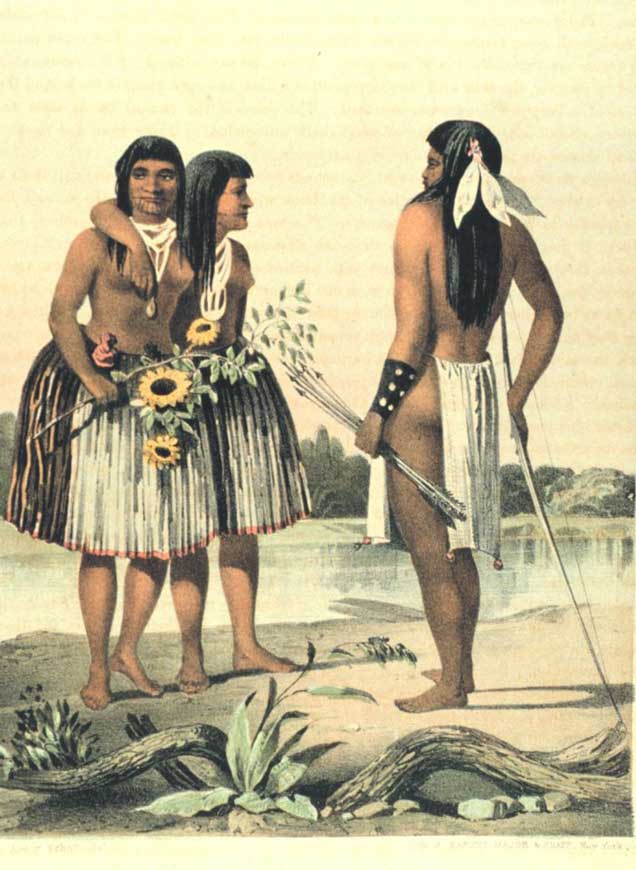 In 1542, the Spanish explorer Juan Rodriguez de Cabrillo sailed along the coast of California. While he really didn’t discover anything, he did encounter the Chumash Indians who occupied the three northern large islands of the Santa Barbara archipelago and the shoreline from Malibu Canyon to Estero Bay. The Chumash were a coastal people with a maritime lifestyle.

Cabrillo described the Chumash this way:  “They were dressed in skins and wore their hair very long and tied up with long strings interwoven with the hair, there being attached to the strings many gewgaws of flint, bone, and wood.”  Regarding Chumash on Santa Cruz Island he reported:  “They are fisherman; they eat nothing but fish; they sleep on the ground; their sole business and employment is to fish.”

The Spanish noted that there were 10 rancherias (small Indian settlements) on Santa Cruz Island.  In addition, the Spanish mention the names of more than 20 villages on the mainland coast. It is generally estimated that at the time of contact with the Spanish, there were 75-100 Chumash communities with a total population of  20-30,000.

The villages usually contained between 15 and 50 houses roughly aligned along a street. Chumash houses were bowl shaped structures made of poles and covered with thatched tules. Anthropologist A. L. Kroeber, in his 1925 Handbook of the Indians of California describes the structure this way:  “The structure was hemispherical, made by planting willows or other poles in a circle and bending and tying them together at the top.”

The house diameters ranged from four to seven meters. Next to many of the houses were temascal, smaller dome-shaped structures covered with mud which were used as sweat houses.

One of the substances gathered and used by the Chumash was bitumen, a naturally occurring type of tar from the Channel Islands. The Chumash used this as a kind of all purpose glue. Paula Neely, writing in American Archaeology, reports:  “The Chumash gathered naturally occurring bitumen from numerous seeps throughout the islands. They used the gooey substance to waterproof canoes, line baskets used as water bottles, and to plug holes in shells that they used as food containers. They even chewed it.”

On the negative side, the polycyclic aromatic hydrocarbon toxins in the bitumen may have led to major health problems, such as cancer, damage to internal organs, and reproductive impairment. This may have also lead to an overall decrease in Chumash stature of about four inches.

According to the oral history of the Chumash, all of the people originally lived on Santa Cruz Island. One day Xoy split the people into two groups. One group, the ka’ikiku, went over a rainbow bridge to Mount Pinos. The other group, the molmolokiku stayed with Xoy and learned how to make plants and animals for the ka’ikiku to use. Thus the ka’ikiku ask the molmolokiku for guidance in using plants and animals. Many of the plants were used medicinally and spiritually.

For the Chumash, as for many of the Indian peoples of California, one of the most important spiritual plants was jimsonweed (Datura) which was used to help produce visions. In many of the tribes, it was felt that jimsonweed was so powerful that it should be used only once. However, among the Chumash, John Baker, writing in Sacred Realms: Essays in Religion, Beliefs, and Society, reports:  “Individuals were allowed to use the plant as often as they saw fit, and they could take it right in their own village.”

John Baker notes that among the Chumash:  “A person who ingested Datura for visionary purposes might do so in order to communicate with the spirit of a beloved person who had died, or to obtain a glimpse of his or her own future. Datura could also be used to locate lost objects.”

In addition to spiritual uses, jimsonweed was also used medically. Jimsonweed (Datura) was used as an anesthesia when setting bones. In addition, it might be ingested when treating bruises and wounds. John Baker reports:  “Datura was taken internally to ‘freshen the blood’ and to treat alcohol-induced hangovers (a post-contact innovation) and applied externally to treat hemorrhoids.”  Baker also reports: “It is clear that the Chumash use of Datura was based upon a thorough empirical knowledge of the effects of the plant.”

Specialists understood both the dosages needed to achieve different ends as well as the preparation and environmental factors which can influence outcomes.

Among the Chumash, a tea made from the root and rhizomes of Anemopsis californica (commonly called yerba mansa, swamp root or lizard tail) was used as a drink for colds, asthma, and urinary tract disorders. It was also used to wash cuts and sores and for bathing arthritic joints. According to pharmacology professor James Adams and the former director of the Chumash Interpretive Center Frank Lemos in an article in News from Native California:  “This plant has been used for a long time in California and should be investigated by scientists interested in new drugs for the treatment of venereal diseases and asthma.”

For headaches, stomach problems, and arthritis, the Chumash ate the root of hog fennel (Lomatium californicum). In addition, hog fennel seeds were eaten to treat colds and sore throats. Hog fennel root was worn on a necklace or on a belt as a means of repelling rattlesnakes.

Red shank (Adenostoma sparsifolium, also called greasewood or ribbonwood) had a number of medicinal uses among the Chumash. Sore throats, stomach problems, respiratory problems, and colds were treated with a tea made from red shank bark. A tea made from small branches was used for treating toothaches and for washing wounds.

Ephedra californica (commonly called joint fir, Indian tea, and desert tea) was used by the Chumash for purifying the blood and for treating urinary tract infections and venereal diseases. Other California tribes used this plant for stomach problems and backaches. Since one of the active ingredients found in the plant is psuedoephedrine, it was also used as a nasal decongestant and as a stimulant.

The Chumash and the Kumeyaay used an elderberry (Sambucus mexicana) flower tea for treating colds, flu, and fevers. This tea was also used to relieve premenstrual syndrome and dysmenorrhea. The inner bark of the elderberry was used as an emetic and its berries were used as a laxative.

Indian Rebellions at the California Missions