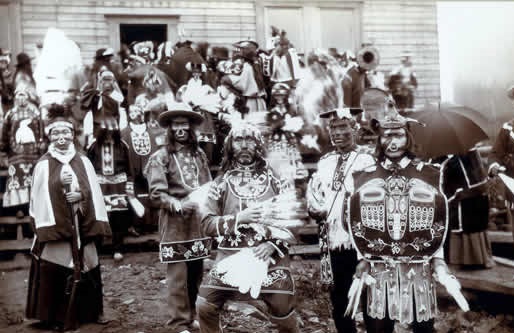 The Northwest Coast, one of the most culturally and linguistically diverse culture areas in North America, occupies the area between the Pacific Coast and the mountains from Alaska through northern California. The Tlingit are the northernmost tribe in the Northwest Coast Culture Area. At the time of European contact, the Tlingit homelands included the coast regions and islands of what is now southern Alaska and northern British Columbia.

The Northwest Coast is usually divided into three distinct cultural provinces with the Northern Province including the Tlingit, Tsimshian (Nisg’a), Haida, Haihai, and Haisla tribes. The social structure of these tribes was rigidly organized and hierarchical. Among these tribes, the primary units of social organization were the clan and the village.

In the traditional pre-European villages each of the houses within the village was associated with an extended clan and each clan had certain privileges, which included fishing, hunting, and gathering rights as well as ceremonial rights (such as ownership of songs and dances).

Concerning the location of Tlingit villages, German geographer Aurel Krause, in his 1885 book The Tlingit Indians: Results of a Trip to the Northwest Coast of America and the Bering Straits, reports:  “Since fishing supplies the principal subsistence of these people, the choice of a place for settlement depends largely on the proximity of good fishing grounds and safe landing places for canoes.”

Some Tlingit villages consisted of only a few houses which were placed in a single row while other villages might have as many as 60 houses which might be arranged in two rows. Among the Tlingit, each house had a fixed place in the village and could not be moved to another place. If the house became too small, then annexes were built, but these were considered to be part of the original house.

Clans are named, extended family units which often are corporate in nature (that is, they will have a formal leader and possess property) and are usually exogamous (requiring marriage outside of the clan.) The clan not only lived under the same roof, but the house served as a clan symbol. The front of the house was often painted with a family crest design.

Among the Tlingit, descent is matrilineal. This means that people belong to the same clan as their mother. Thus, a village leader’s position would be inherited by his nephew (his sister’s son) rather than by his own son.

Tlingit clans are linked together in a phratry system. This means that each clan is linked to another with a set of social and ceremonial obligations.

The Tlingit were 18 distinct and autonomous groups. Each group felt that it was distinct from the others and had its own unique origins and ancestry. Ethnographer Kalervo Oberg, in The Social Economy of the Tlingit Indians, reports:  “The clan has a name denoting its place of origin, a story of its genesis, and a history of its migration.”

Tlingit oral tradition speaks of a gradual migration northward from the mouths of the Nass and the Stikine rivers. According to the stories, the clans would remain near a certain river for a long time. Then there would be a quarrel—usually over women or wealth—and the village would break apart with one portion going off in search of new territories.

The Tlingit acquired new territory by settling on lands that were unclaimed by any other group, by negotiating agreements to share certain lands, and by conquest. In their migrations northward, the Tlingit often came into contact with Athabascans who had come down the rivers to the coast. In some instances, the Tlingit simply drove the Athabascans away and in other instances the two groups intermingled.

When they acquired unclaimed land, the Tlingit would give the place a name and settle there. If only one clan settled a new area, they would invite members of a clan from the opposite phratry to join them.

By the time the first Europeans began to explore the Pacific coast of Alaska in the eighteenth century, the Tlingit had a long history of living in the area. The Tlingit had their first contact with Europeans in 1786 when a Spanish expedition landed at Lituja Bay. In trading with the Tlingit, the Spanish noticed that they were very aware of iron and many carried an iron dagger in a leather sheath around the neck. This suggested that they had traded with people from Asia.

The Russians and the Tlingit Indians