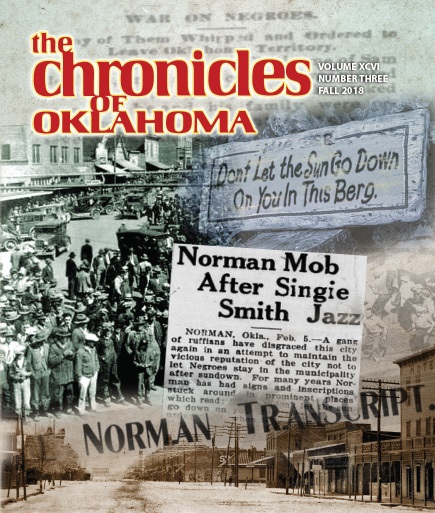 Thomas Jefferson was one of the Americans who envisioned removing all Indians from American soil and placing them in a confined territory west of the Mississippi River. In the early nineteenth century, many Indian nations were forcibly removed, often through the use of military force, and resettled in Indian Territory. Here they were to live and to govern themselves unhindered by federal or state forces.

Indian Territory was to be Indian land forever, but it was soon evident that the United States government had lied or lacked the political will to enforce its own laws as expressed in the removal treaties. Mary Jane Warde, in article in the Chronicles of Oklahoma, writes:  “Intruders not only flouted Indian law and authority but also illegally exploited the resources of Indian Territory. They mined coal, collected salt, quarried stone, and dug snakeroot.”

Non-Indian cattle were allowed to graze on Indian lands, often over-grazing it and providing no compensation to the Indians. Many non-Indians also felt that they had a right to hunt, fish, and camp in the area. Mary Jane Warde writes:  “Indian officials complained and petitioned for stiffer laws against intrusion, but they received little satisfaction from the federal government.”

By the end of the nineteenth century, Manifest Destiny had been fulfilled as the United States expanded from the Atlantic to the Pacific, and historian Frederick Jackson Turner declared that the frontier was dead. American greed for land coupled with the capitalistic concern for transferring wealth for the poor to the rich now began to foster the view that Indian Territory was “unused” land which needed to be developed.

In 1893, Congress established the Commission to the Five Civilized Tribes, and President Grover Cleveland appointed Henry Dawes, Meredith Helm Kidd, and Archibald McKennon to the commission. Former Senator Henry Dawes was appointed as the commission’s chairman and consequently the commission became commonly known as the Dawes Commission. Dawes considered himself to be a friend to the Indian and was described by others as “the Indian’s truest friend.” He felt that Indians should be assimilated into American culture like other immigrants and that the best way to do this was to destroy tribal governments, tribally held land, and to put each Indian on a parcel of privately owned land as envisioned by Jefferson.

While there were many tribes in Oklahoma, the term “Five Civilized Tribes” referred to the Cherokee, Creek, Choctaw, Chickasaw, and Seminole. These had been southeastern agricultural Indian nations which had adopted a great deal of European culture prior to their forced removal to Indian Territory.

The purpose of the Commission was to persuade the leadership of the Indian nations in Oklahoma to give up title to their land so that it could be allocated to individuals. In his book The Dawes Commission and the Allotment of the Five Civilized Tribes, 1893-1914, Kent Carter writes:  “The hope was that the commission could persuade the governments of the Five Civilized Tribes to negotiate themselves out of existence—an essential first step in implementing a policy of allotting land to each individual Indian.”

The primary governmental concern at this time was for Indians to become assimilated into the dominant culture. In addition, dissolution of tribal governments would clear the way for what had been Indian Territory to become a part of Oklahoma and for Oklahoma to become a state. Powerful non-Indian groups pushed for this as an opportunity to make a profit.

The letter of instructions sent to the commission by Secretary of the Interior Hoke Smith states:  “success in your negotiations will mean the total abolition of tribal autonomy of the Five Civilized Tribes and the wiping out of the quasi-independent governments within our territorial limits. It means, also, ultimately, the organization of another territory in the United States and the admission of another state or states to the Union.”

In 1894, the Dawes Commission began its work by travelling to Indian Territory to hold meetings with tribal leaders. They quickly found that tribal leaders had little interest in negotiating allotment with the federal government.

The Cherokee told the Commission that something as momentous as allotment must be discussed by the people at length. Furthermore, they suggested that the United States first settle all outstanding claims from previous treaties. Historian Andrew Denson, in article in the Chronicles of Oklahoma, reports:  “This reluctance to embrace allotment left the American commissioners mystified and angry. Advocates of the policy at this time were convinced that common landholding and tribal government were doomed.”  Cherokee historian Robert Conley, in his book The Cherokee Nation: A History, summarizes the Dawes Commission attitude toward the Cherokee this way:  “U.S. authorities were getting tired of trying to play fair with the Cherokees.”

In meeting with the Creek, the Commission had to use an interpreter because none of the commissioners spoke an Indian language. Commissioner Archibald McKennon believed that most of the 3,000 Creeks who heard his presentation were favorable towards allotment and was somewhat shocked when everyone in the audience voted against the concept.

An intertribal council with representatives from the Creek (D.N. McIntosh, Roley McIntosh, Pleasant Porter, Hotulke Emarthla, Concharte Micco, Isparhecher, George Washington Grayson), Cherokee (E. C. Boudinot, L.B. Bell), Choctaw (Samuel Mayes, Green McCurtain), and others are assembled. The intertribal delegates wrote:“If you will not listen to our protests, if in our assertions, though so well founded in absolute truth as to be unanswerable, you simply reply that it costs too much money to allow our people to remain as we are, we as Indians possessing the common instincts of humanity, reply, then if the die is cast you must do these things yourselves and not ask and expect us to aid you in reducing ourselves to homeless, wandering paupers.”

The Five Civilized Tribes pointed out to the Dawes Commission that the lack of almshouses and potter’s fields in Indian Territory demonstrated the benefits of their communal landholding system. Historian Mary Jane Warde, in her biography George Washington Grayson and the Creek Nation, 1843-1920. writes:  “Unimpressed, the commissioners reminded the Indian representatives that with populous states now surrounding the territory, their way of life was bound to disappear and they would soon be crowded off the land by intruders.”

Concluding that the Indians would support allotment if they knew their best interests, the Commissioners tell the Indians:  “We believe we stand between you and a peril you do not see.”

Having failed to convince tribal leaders to negotiate allotment and dissolution of tribal governments, the commission began to travel the territory seeking testimony from both Indians and non-Indians which supported their view that tribal governments were corrupt and wanted to block allotment for personal gain. Based on this testimony, the commission then issued a report showing that it was the fault of tribal governments, not the United States, that the territory had been overrun with non-Indians. The report concluded:  “Their system of government can not continue. It is not only non-American, but it is radically wrong, a change is imperatively demanded in the interest of the Indian and whites alike, and such change can not be much longer delayed. The situation grows worse and will continue to grow worse.”

The Dawes Commission insisted that the federal government should act without the consent of the Indians and that the tribes had destroyed the force of the treaties by allowing non-Indians to become citizens under their laws. They also insisted that tribal governments were corrupt and irresponsible and therefore the promises of self-government made in the treaties were no longer binding.