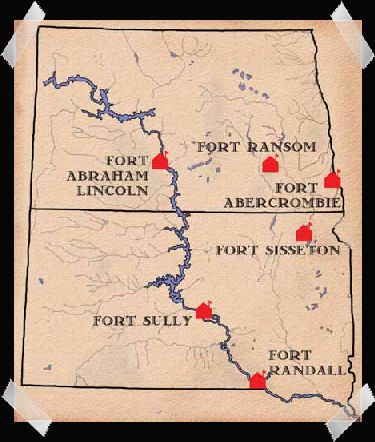 The Dakotas—the modern states of North and South Dakota—are a part of the Northern Plains, an area which was buffalo country from the time of de-glaciation until modern agriculture in the nineteenth century. A few of the archaeological findings regarding the Dakotas BCE are described below.

The time from first settlement by Indian people following de-glaciation until the climate changes about 9,000 years ago is called the Early Pre-contact Period by some archaeologists and the Paleo-Indian Period by others. Indian people during this era were hunting now extinct mega-fauna, including the mammoth and pre-historic bison. Some of the archaeological sites from this period include:

Ray Long: About 9000 BCE, Indian people occupied the Ray Long site (39FA65) in South Dakota. They were using spear points which are lanceolate with narrow, straight to concave bases. These points had ground edges near the bases.

Jim Pitts: About 8200 BCE, Indian people were using the Jim Pitts site near the Black Hills area known as the Racetrack. The people were hunting bison and mule deer. They were using Goshen, Folsom, Agate Basin, Cody, and Fishtail points.

The era which archaeologists call the Middle Pre-contact Period begins about 6800 BCE with a hot, dry Altithermal. Much of the area is abandoned by Indian people because of the lack of game. The Altithermal began to moderate about 3000 BCE and both the animal and human populations increased. During the last portion of the Middle Pre-contact (about 1000 BCE), the use of the tipi as a primary domicile increased. In addition, there is increased evidence of domesticated dog.

Benz: About 6000 BCE, Indian people with Cody Complex tools began to occupy the Benz site on the Knife River in North Dakota. The Cody Complex, which included an assemblage of projectile points, scrapers, gravers, wedges, choppers, hammer stones, and bone tools, was associated with bison kill and processing sites.

Liking Bison: By about 4730 BCE, Indian people were using the Liking Bison site in South Dakota. This was a bison kill site in which the hunters drove the animals into a gully which is about 3-5 feet wide and 2-3 feet deep.

Beaver Creek Rock Shelter: About 4700 BCE, Indian people were using the Beaver Creek Rock Shelter (39CU779) in present-day Wind Cave National Park. Archaeologist Douglas MacDonald, in his book Montana Before History: 11,000 Years of Hunter-Gatherers in the Rockies and Plains, writes: “Among the animal remains from the site are a variety of frogs and reptiles, suggesting that the arid conditions of the Altithermal had not dried out this north-facing rock shelter. In addition, remains of deer, bison, and pronghorn indicate a diverse diet for Early Archaic hunter-gatherers at the site.”

Besant Phase: By 90 BCE, in Montana, Wyoming, North Dakota, and Alberta, the time period which archaeologists call the Besant Phase begins. Indian people at this time were sophisticated buffalo hunters and were engaging in other big game hunting. Archaeologist George Frison, writing in the Handbook of North American Indians, reports: “Besant hunters were apparently still using the atlatl and dart, and their projectile points are distinctive in morphology and manufacture technology, utilizing the best available raw materials. They may have been the most sophisticated bison-hunting group on the Northwestern Plains in pre-horse times judging from evidence recovered in eastern Wyoming.”

They were using ground stone tools as well as side-notched projectile points. At some sites on the Upper Missouri River and at some sites in Alberta, the people appear to have used ceramics which suggests that they were in contact with Woodland Indian groups to the east.

James River Area: About 25 BCE, an epidemic struck the people living along the James River area and killed at least 28 people, mostly infants, children, and elders. The partially cremated remains of the dead were buried in a deep pit lined with hides.