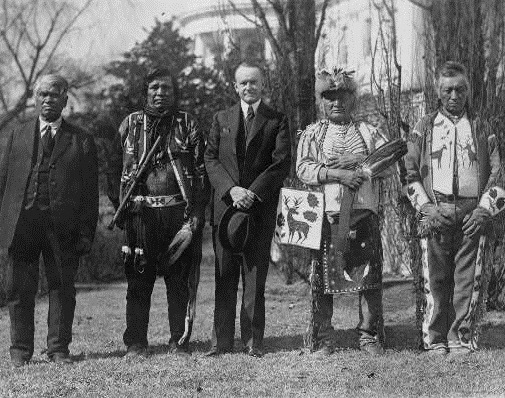 During the first part of the twentieth century, American Indians were granted citizenship by Congressional action on several different occasions. While citizenship is often felt to be associated with the right to vote, this has not always been the case with regard to Indians. The right to vote is a right which has been traditionally controlled by the states. The states had tended to view Indian voting and Indian citizenship as two separate items. While the struggle by African Americans to obtain the right to vote is fairly well known, the struggle by American Indians to obtain this right is less well known.

Toward the end of the nineteenth century a series of legal opinions and court rulings had determined that American Indians were not citizens and furthermore they could not attain citizenship unless Congress enacted specific legislation granting citizenship. In 1887 Congress passed the General Allotment Act (also known as the Dawes Act). While the primary focus of the Dawes Act was on breaking up Indian reservations, destroying tribal governments, and transferring land from Indian ownership to non-Indian ownership, it did provide the legal mechanism for Indians to become citizens. Part of the act called for citizenship to be conferred on those who abandoned their tribes and adopted the habits of civilized life. Ideally, Indians who became Christian, English-speaking farmers could become citizens. Citizenship in the minds of non-Indians was directly associated with private land ownership.

In Matter of Heff the Supreme Court held in 1905 that Indians became American citizens as soon as they accepted their land allotment. The decision infuriated Congress and the Bureau of Indian Affairs who had insisted that Indians who accepted allotments could not become citizens until the end of their trust period of twenty years.

In 1907, Ethan Anderson (Pomo) won a court case (Anderson versus Mathews) which gave non-reservation Indians the right to vote. Anderson had attempted to register to vote in Mendocino County and was refused. The court case, which was decided by the California Supreme Court, was funded by the Indian Board of Cooperation.

The drive for Indian citizenship came up again during World War I. Indians were required to register for the draft but were ineligible to be drafted since they were not citizens. Yavapai physician Dr. Carlos Montezuma protested the draft policy and urged the United States to make Indians citizens and then draft them. He wrote: “They are not citizens. They have fewer privileges than have foreigners. They are wards of the United States of America without their consent or the chance of protest on their part.”

There were many Indians who saw citizenship as something which was being imposed on them by non-Indians. In 1919, the Society of American Indians held its conference in Minneapolis on the theme of citizenship. While many supported citizenship, Cahuilla spiritual leader Francisco Patencio told them: “I and my people we do not want citizenship. … What my people in California want is to know their reservation boundary lines.”

In 1924 Congress passed the Indian Citizenship Act which gave all Indians citizenship and, theoretically, the right to vote. It is estimated that about two-thirds of the Indians had acquired citizenship before the passage of this act. Passage of the act was promoted by progressives who were concerned about the constitutional rights of Indians and who wished to free Indians from federal control. It was generally felt that citizenship would help assimilate Indians.

In response, Congress passed another act in 1928 which specifically granted citizenship to the North Carolina Cherokee. However, Eastern Cherokee leader Henry M. Owl was denied the right to register to vote in 1930. The registrar refused to register Indians because they were not citizens. In his book Cherokee Americans: The Eastern Band of Cherokees in the Twentieth Century, historian John Finger points out: “Despite Congress’ explicit and repeated directives, county registrars continued to deny Cherokees the vote until after World War II.”

In response, Congress passed another act once again reaffirming citizenship for the Eastern Cherokee. Local newspapers protested Congressional interference with local affairs and county registrars continued to deny Cherokees the vote until after World War II. North Carolina denied Indians the right to vote claiming that Indians were illiterate. The superintendent of the Cherokee Agency reported: “We have had Indian graduates of Carlisle, Haskell, and other schools in stances much better educated than the registrar himself, turned down because they did not read or write to his satisfaction.”

In 1946, North Carolina county registrars refused to register Eastern Cherokee war veterans to vote. The Cherokee appealed the decision to the governor and attorney general, but nothing was done.

In Arizona two Pima Indians attempted to vote in 1928. The Arizona Supreme Court in Porter v. Hall concluded that Indians were not entitled to vote because they were “wards of the government” and persons “under guardianship” were prohibited from voting by the state constitution. The Arizona Attorney General’s office ruled in 1944 that Indians who were living outside the reservation and who were subject to state laws and state taxation were not eligible to vote.

Some states passed legislation to disenfranchise Indians. In an effort to deny Indians the right to vote, the Montana state constitution was amended in 1932 to permit only taxpayers to vote. Since Indians on reservations did not pay some local taxes, they could not become voters. The Montana state legislature in 1937 passed a law requiring all deputy voter registrars to be qualified, taxpaying residents of their precincts. Since Indians living on reservations were exempt from some local taxes, this requirement excluded almost all Indians from serving as deputy registrars. It thus denied Montana’s Indians access to voter registration in their own precincts.

A 1937 report by the Solicitor General found that several states denied Indians the right to vote. In response to the inquiry by the Solicitor General, Colorado’s attorney general replied: “It is our opinion that until Congress enfranchises the Indian, he will not have the right to vote.” Word of the 1924 citizenship act had apparently not yet reached Colorado. Indians were not allowed to serve on juries in Colorado until 1956 and tribal members on reservations were not allowed to vote until 1970.

The Solicitor General also found that four states—Idaho, New Mexico, Maine, and Washington—denied Indians the right to vote because of the phrase “Indians not taxed” in Article 1 of the Constitution.

In 1940 Congress once again conferred citizenship on Indians in the form of the Nationality Act which again conferred citizenship on American Indians and required that Indian men register for the draft. In spite of the reconfirmation of citizenship, some states, such as New Mexico and Arizona, refused to allow Indians to vote. The Act was opposed by the Indian Defense League of America. Tuscarora leader Clinton Rickard urged those who wish to volunteer for the armed services do so as alien non-residents

Utah denied Indians the vote because Indians on reservations were not actually residents of Utah but were residents of their own nations. Indians were thus considered non-residents and hence not eligible to vote. In 1957, the Utah state legislature finally repealed the legislation that prevented Indians living on reservations from voting.

Many historians cite 1948 as the year in which Indians finally won the right to vote. Court rulings in Arizona and New Mexico affirmed that Indians have the right to vote. The Court ruling in New Mexico was started when Miguel Trujillo, Sr. (Laguna), a teacher, attempted to register to vote and was refused by the recorder of Valencia County. In the ruling, the Court found that New Mexico had discriminated against Indians by denying them the vote, especially since they paid all state and federal taxes except for private property taxes on the reservations. The federal judge remarked: “We all know that these New Mexico Indians have responded to the needs of the country in time of war. Why should they be deprived of their rights to vote now because they are favored by the federal government in exempting their lands from taxation.”

In Arizona, Frank Harrison and Harry Austin, both Mohave-Apache at the Fort McDowell Indian Reservation, attempted to register to vote and were not allowed to register. In Harrison v. Laveen the Arizona Supreme Court overturned the earlier Porter v. Hall decision and agreed with the plaintiffs that their Arizona and United States constitutional rights had been violated. All Indians in Arizona are given the right to vote.

Even though the Indian people of Arizona and New Mexico were given the right to vote, very few actually voted in the next national elections. Among the Navajo, for example, only 3,000 out of an estimated 60,000 register to vote and only about 1,000 actually voted. According to Frank Waters, in his book Masked Gods: Navaho and Pueblo Ceremonialism: “They were all possessed of the same ever-present fear—that by exercising their voting privilege and paying taxes, they would lose their land.”

In Maine, Indians were finally given the right to vote in 1953 when the state accepted the 1924 Indian Citizenship Act.

In 1957, the Utah state legislature repealed legislation that prevented Indians living on reservations from voting. Under the law, Indians had been considered non-residents and hence not eligible to vote.

In New Mexico in 1962 an unsuccessful non-Indian candidate for elective office challenged the validity of Indian voting rights by claiming that Indians were not state residents. The state supreme court reaffirmed the rights of Indians to vote in the state.

In 1968, the Havasupai finally obtained the right to vote in Arizona and federal elections. The Havasupai Reservation is located in Coconino County and the county had never designated the reservation as a voting district. Thus, Havasupai voters could only vote by registering in some distant precinct and then travelling to that distant community to vote.

During the past fifty years, the focus has shifted from obtaining the right to vote, to getting Indians elected to local, state, and federal offices. States and local governments in the western states have responded by diluting the Indian vote through redistricting plans and/or by requiring photo ID (and not allowing tribal ID) and/or requiring voters to have a street address (many rural reservation homes do not have street addresses).