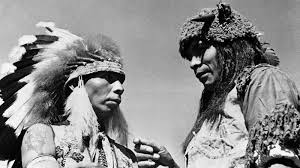 At the beginning of the Civil War in 1861, the United States withdrew its troops from Forts Cobb, Arbuckle, and Washita and, afraid that annuity payments might fall into the wrong hands, withheld the annuities which were owed to the tribes. The Confederacy moved into the vacuum left by the federal government and held treaty councils with the tribes. The Confederacy, of course, lost the war, and in 1866 the United States government set about to impose new treaties on the Indian nations of Indian Territory (now Oklahoma).

In Washington, D.C., the United States met with the Indian nations who had signed treaties with the confederacy: Seminole, Creek, Cherokee, Choctaw, and Chickasaw. In the new treaties, the Indians nations gave up more of their land, agreed to accept their slaves as tribal members, and agreed to provide land for other Indian nations. The treaties also stipulated that a general council of all of the tribes in the Indian Territory be established and that rights of way for railroads be granted.

Under the treaties, the United States agreed to reimburse Christian mission societies which had lost property during the war. In an article in the Chronicles of Oklahoma, Sue Hammond reports:

“In addition, mission organizations were granted the right to occupy and use as much as 160 acres of land for missionary and educational purposes.”

In Washington, D.C., there were two Cherokee delegations negotiating with the federal government: one was loyal to John Ross and the other to Stand Watie. The 1861 treaty with the Confederacy had divided the Cherokee into two groups: the Ridge or Treaty Party led by Stand Watie and Elias C. Boudinot, and the Ross or Non-Treaty Party led by John Ross.

In Washington, the Watie delegation was initially headed by Elias C. Boudinot. John Rollin Ridge, who had been living in California, suddenly appeared and attached himself to the Boudinot delegation. The United States government soon recognized John Rollin Ridge as the head of the Southern Cherokee group. In an article in the Chronicles of Oklahoma, Clyde Ellis reports:

“In concert with Boudinot he provided a formidable challenge to the Ross delegation and by mid-June the Southern delegation won a favorable treaty that was sent to Johnson and the senate for ratification.”

With regard to Ridge’s role in the delegation, Ellis writes:

“Just how Ridge emerged as the acknowledged leader of a group in which he had played no previous role is difficult to ascertain.”

President Johnson, however, decided that it would not look good to be dealing with former rebels and ordered a new treaty to be drawn up with John Ross.

Cherokee Principal Chief John Ross died in Washington, D.C. His body was temporarily interred next to his wife Mary at Wilmington, Delaware. Under the instructions of the Cherokee National Council, his remains were brought to Tahlequah, Oklahoma and laid to rest in the Ross cemetery.

Will Ross was named principal chief of the Cherokee to fill the unexpired term of his uncle, John Ross. John Ross had groomed him for this position and had paid for his education at Princeton. Journalist Stanley Hoig, in his book The Cherokees and Their Chiefs: In the Wake of Empire, describes Will Ross:

“A thin-faced man with flowing mustache and beard, the well-educated Ross dressed and spoke in the vogue of white political leaders of the day.”

With regard to the new treaty with the United States, Will Ross said:

“Whatever may be our opinion as to the justice and wisdom of some of the stipulations it imposes, we have full assurance that the delegation obtained the most favorable terms they could, and it is our duty to comply in good faith with all its provisions.”

However, Chief Ross indicates that there are three troublesome articles in the treaty:

In Oklahoma, the Cherokee adopted a series of bilingual textbooks in arithmetic, geography, and history. These books contained the text in English on one page and the text in Cherokee on the opposite page. According to historian William McLoughlin, in his chapter in Between Indian and White Worlds: The Cultural Broker:

“It was strongly opposed by the wealthier English-speaking parents who wanted nothing to do with the old language.”

The United States charged the Creek Nation with treason, ignoring the fact that the Upper Creek supported the Union during the Civil War. The federal government forced a Reconstruction Treaty upon the Creek in which they gave up the western half of their lands at 30 cents an acre. The Creek also were forced to free their slaves and to accept them as Creek citizens. The treaty also called for the Creek to give up rights of way for two railroads: one north-south and one east-west.

Much of the money paid to the Creek was to be allocated to the Loyal Creek in compensation for losses they had obtained during the Civil War. According to Jeffrey Burton, in his book Indian Territory and the United States, 1866-1906: Courts, Governments, and the Movement for Oklahoma Statehood:

“This was the same as making the Loyal Creeks pay compensation to themselves.”

Prior to the Civil War, many prosperous Indian planters, like their non-Indian counterparts, owned African-American slaves. Following the Civil War, these slaves had to be set free. In response to the new treaty with the United States, the Choctaw and Chickasaw passed the Freedman Act. Devon Mihesuah, in an article in the Chronicles of Oklahoma, reports:

“In this legislation the tribes allowed their freed slaves all the rights and privileges of citizenship except in the case of annuity monies. Freedmen (men and women) who did not desire to become citizens and those who did not register under the Freedman Registration Act were considered to be intruders and therefore subject to forced removal from tribal lands.”

The Commissioner of Indian Affairs approved a contract to move the Wichita and affiliated tribes from their temporary camps in Kansas to their homes in Oklahoma. The tribes had been loyal to the Union and had fled Oklahoma during the Civil War. When they heard that an ex-Confederate officer had been awarded the contract, they protested, but to no avail.

The Kansas Delaware sold their land and moved to Oklahoma. In his book Between Two Fires: American Indians in the Civil War, historian Laurence Hauptman writes:

“Once again, the cozy relationship between ‘government chiefs,’ Kansas politicians and traders, railroad officials – now the Union Pacific Eastern Division and the Missouri River Railroad – and Washington policymakers and bureaucrats sealed the deal.”

The government, on behalf of the railroad, paid the Delaware $2.50 per acre for their land.

The Delaware who signed the agreement—Principal Chief John Conner, Charles Journeycake, Isaac Journeycake, and Big John Sarcoxie—were Baptists who were associated with the missionary who had been appointed Indian agent. In an article in the Plains Anthropologist, Brice Obermeyer reports:

“Upon hearing of the agreement, the Delaware held a general council while still resident on their reservation in Kansas to discuss the terms for removal.”

In Oklahoma, the Munsee signed a compact with the Cherokee in which they paid $4,000 for the rights of Cherokee citizenship.

In Oklahoma, coal was being mined under license from the Choctaw and Chickasaw governments. The mine owners were non-Indians who had married into the nations.

In Oklahoma, Cyrus Harris was elected as Governor of the Chickasaw Nation. Harris believed that the best hope for maintaining tribal independence was in the allotment of tribal lands. In the tribal election he defeated Daugherty Colbert, a Confederate sympathizer who had been governor since 1858.

In Oklahoma, Allen Wright was elected as Choctaw Principal Chief. In his book Indian Territory and the United States, 1866-1906: Courts, Governments, and the Movement for Oklahoma Statehood, Jeffrey Burton notes:

“Wright’s attitudes were typified by an insistent belief in the supremacy of tribal law over the unwritten code of an earlier tradition which many Choctaws had not abandoned.”