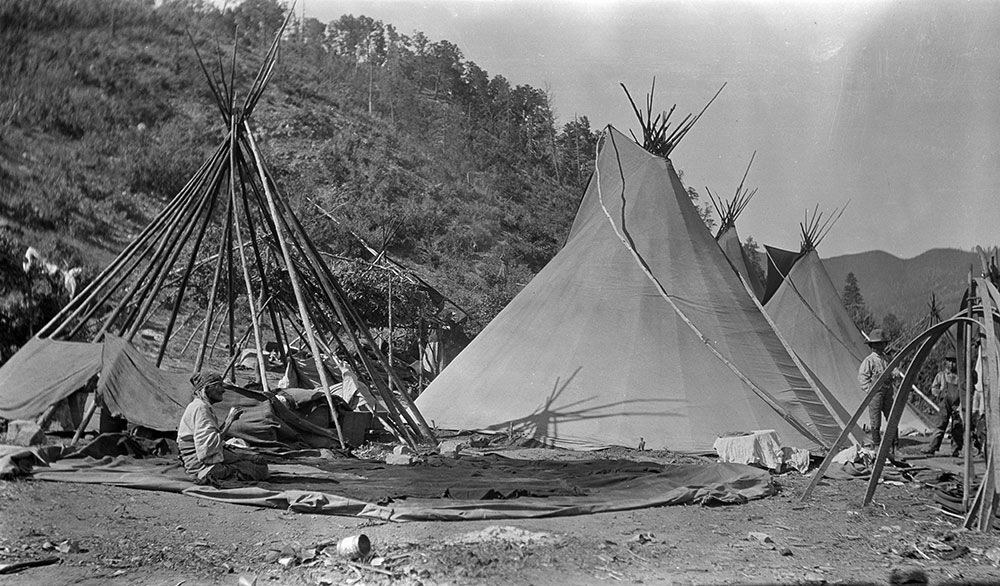 The Athabaskan (also spelled Athapaskan and Athabascan) language family is found in the western American Indian culture areas. Linguists feel that the Athabaskan language family is one branch of a larger genetic grouping called Athabaskan-Eyak. Eyak is a single language which was spoken on the south coast of Alaska and which is nearly extinct. Proto-Athabaskan and Proto-Eyak became differentiated from each other by 1500 BCE. Michael Krauss and Victor Golla, in their entry on the Northern Athapaskan languages in the Handbook of North American Indians, report:

“Whenever it occurred, the linguistic split between Proto-Athapaskan and Proto-Eyak was apparently followed by a total cessation of communication between the two groups, for there is no evidence of subsequent linguistic interinfluence.”

“The degree of diversity within Athapaskan indicates that Proto-Athapaskan was still an undifferentiated linguistic unit until 500 B.C. or later.”

The distribution of the Athabaskan languages indicates that they originated in the interior of Alaska, British Columbia, and the Yukon rather than on the Pacific Coast.

In an article in Anthropological Linguistics, Joyce McDonough reports:

“The Athabaskan languages are generally classified as tone languages, though there is considerable variation in the tonal types reported among them.”

The Athabaskan language family is generally divided into the sub-families briefly described below.

The divergence of the Athabaskan languages on the Northwest Coast probably began during the last glaciation. Linguist John Enrico, in an article in Anthropological Linguistics, writes:

“Speakers of what was to become Haida became isolated from the rest first, perhaps by their moving southward, but more likely by the others (who became speakers of what corresponds to PAET) moving inland.”

These Proto-Athabaskan-Eyak-Tlingit (PAET) moved down the interior of what is now British Columbia. The Haida moved further south and much later the Tlingit moved back to the coast.

Some linguists classify Tlingit as a language isolate which is only distantly related to Athabaskan. In his book The Native People of Alaska, Steve Langdon reports:

“Tlingit may have diverged from the other languages as long as 6,000 years ago.”

“Tlingit, a single language spoken across a wide territory along the Alaska panhandle with but moderate dialect differences, bears a close resemblance to Athapaskan-Eyak in phonology and grammatical structure but shows little regular correspondence in vocabulary.”

Glottochronology suggests that the Pacific Coast languages diverged from the northern Athabaskan about 1,300 years ago.

“Relatively intense contact with the Russians left over 300 Russian loanwords in Tanaina (by far the largest number for any Athapaskan language.)’

Holikachuk is considered moribund as the youngest speakers in 1980 were nearly 50.

In her 1993 book The Semantics of Time: Aspectual Categorization in Koyukon Athabaskan, Melissa Alexrod describes Koyukon as moribund as there are less than 1,000 speakers and all are over the age of 20. Michael Krauss and Victor Golla report:

“In spite of strong missionary support, Koyukon is moribund, largely because of the suppression of native languages in schools throughout Alaska during  the period of 1910-1960.”

Koyukon is the largest Athabaskan speech community entirely within Alaska. About 85 nouns diffused from Russian into Koyukon.

Kolchan (Upper Kuskokwin) had little direct European contact until the twentieth century. There are 66 Russian loanwords in the language, mostly from indirect trading influences. Children still speak the language and there has been a Native language program in the schools since 1972.

Tanana (also called Lower Tanana) is spoken along the Tanana River and is partly intelligible with Kolchan. While there was no direct contact with Russians in this area, there are about 46 Russian loanwords in the language. The language is moribund—in 1980 almost all of the speakers were over 40.

With regard to Upper Tanana, Michael Krauss and Victor Golla report:

“Because of the relative isolation of the area, at least until the construction of the Alaska Highway in 1943, children continued to learn the language until the 1960s.”

Since the 1980s, Upper Tanana has been rapidly replaced by English and is becoming moribund.

Kutchin is spoken across a wide territory from the Mackenzie River in Canada to the Middle Yukon River in Alaska. In 1980, the language was still spoken by children and is considered a viable language.

At the time of first contact with Europeans, Chipewyan was spoken by the caribou-hunting people who lived in the forest and tundra areas of Alberta, Saskatchewan, and Manitoba. This is the earliest documented Athabaskan language as fur traders compiled vocabulary lists which date from 1742.

The Oregon Coast sub-family includes: Upper Umpqua, Tututni, Galice-Applegate, Chetco, and Tolowa. The linguistic evidence suggests that the Oregon coastal Athabascan-speakers did not enter the area until about 700 to 1,000 years ago.

Tolowa, which was spoken by Native peoples in the extreme northwestern corner of California and portions of Oregon, had perhaps 1,000 speakers. There is very little descriptive material available about this language.

Interestingly, Upper Umpqua, the northernmost language of this group, shares linguistic features with the languages in the California group.

Hoopa diverged from the other Pacific Coast Athabaskan languages about 900-1,200 years ago. Hoopa and Mattole diverged about 1,000 to 1,300 years ago.

The Plateau sub-family includes only one language: Nicola. The Nicola homeland was in the interior of present-day British Columbia. The Nicola language is considered extinct. The linguistic data on this language is fragmentary but shows that it was an Athabaskan language. However, the data do not permit any determination of its relationship to other Athabaskan languages.

Glottochronology suggests that the Southern Athabaskan languages – Navajo and Apache – may have diverged from the Northern languages as early as 2,400 years ago.

In Navajo, there are two tone levels: high and low.

The Navajo language, and particularly Navajo grammar, reflects and reinforces the Navajo world-view of motion. Gary Witherspoon, in his book Language and Art in the Navajo Universe, writes:

“The Navajo world is a world of motion—a world of action in which all beings and entities are either acting or being acted upon; a world of change in which both individual entities and systems are constantly going through phased cycles and processes of deformation and restoration; a world of things in motion and things at rest, but one in which even things at rest are defined by the withdrawal of motion and are classified according to their ability or potential to move or to be moved.”

“When a speaker of Navajo describes an object at rest, he places the object in one of 225 categories.”

“The language has a very weak (or nonexistent) past tense; the future is irrelevant. What counts is the present, the here and now, the dynamic present.”

Languages often change by adopting words from other languages. With regard to Navajo, William Lyon writes:

“Navajos do not often integrate borrowed words into their language, primarily because of the complicated structure of the Navajo verb with its monosyllabic stem modified by numerous prefixes. The Navajo language may incorporate Spanish and English nouns and adjectives, but many loan words are not a part of the vocabulary of speakers in general.”

“In historical times the Sarcee have been a Plains tribe closed associated with the Blackfoot, although it is likely that their location before the adoption of the horse was near the headwaters of the North Saskatchewan and Athabasca Rivers, in the territory adjoining the Beaver.”

In his chapter on Plains Indian languages in the Handbook of North American Indians, Ives Goddard reports:

“Sarcee does not have close dialectal ties with other northern Athapaskan languages and has a number of features that set it off sharply from its nearest Athapaskan-speaking neighbors, with whom its speakers had little contact.”