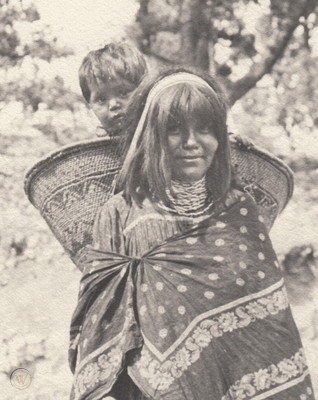 The aboriginal homelands of the Achumawi (also spelled Achomawi, Achomowi, Achemawi) people of North America was along the drainage of the Pit River between the Warner Range and Mount Shasta and Mount Lassen in present-day California. Achumawi villages were located along the Pit River or its tributary streams. The Achumawi villages, whose names were not recorded in the historical records, do not appear to have been politically united.

Linguistically, the Achumawi language, together with the Atsugewi language, form the Palahnihan branch of the Hokan language family.

Fishing was important to the Achumawi. There were about 50 miles of salmon streams in the traditional Achumawi territory and 150 miles of other streams from which the people harvested bass, catfish, lamprey, pike, suckers, and trout. In harvesting fish, they used several different kinds of nets.

Deer were plentiful in Achumawi territory and were often trapped in large pits. A pit 10-12 feet deep would be dug on a deer trail. The hole would then be covered with a thin layer of brush and grass. The deer, coming to water, would then fall into the pit and be trapped for the hunters. Deer were not only an important source of food, but their hides were fashioned into many items, including clothing.

Antelope were taken with a corral. Once the herd was located, often through a dream, a corral would be built out of sagebrush with an opening at one end. The herd would then be driven into the corral by runners and the entrance would be closed. In their chapter on the Achumawi in the Handbook of North American Indians, B. L. Olmsted and Omer Steward report:

“Antelope were sought for food, for hides to make into quivers, caps, blankets, and shirts. Their hooves were made into rattles and their antlers became wrenches for straightening arrows.”

Waterfowl were harvested for food and feathers in swampy areas. B.L. Olmsted and Omer Steward report:

“Waterfowl were caught by stretching nets across flyways in tule swamps and across rivers. Young and mature birds during molting season were clubbed to death.”

The important food plants used by the Achumawi included epos (squawroot or yampah), camas, tiger-lily, wild onions, and sunflowers. They also gathered many types of berries, including bear berries, buckthorn berries, Oregon grape, huckleberries, manzanita berries, salmonberries, and serviceberries. Mustard seed was collected and used for seasoning. Wild tobacco was harvested for smoking and ritual use.

Sugar pines are found throughout the Achumawi territory and the sap from these trees was used as a sweetener (“sugar”) as well as a form of medicine.

Dogbane (milkweed) fibers were used in making nets and cordage. Tules were woven into mats.

The Achumawi, like other American Indian peoples, recognized that fires could be used to enhance hunting and gathering areas. They regularly burned the grassland areas.

Buckskin was commonly used for making clothing for both men and women. The basic garment resembled today’s poncho with holes for the head and arms.

With regard to adornment, women usually had three lines tattooed under the mouth. Men would wear a dentalium shell or other ornament through the pierced nasal septum.

With regard to Achumawi dwellings, Alfred Kroeber, in his 1925 Handbook of the Indians of California, reports:

“The summers were spent in the open, under a shade or behind a windbreak of brush or mats. The ordinary permanent or winter house was of bark, without earth covering, and little else than a slopping roof over a shallow excavation.”

Basketry was, and still is, important to the California Indians. Achumawi baskets were generally made with a twining method in which a heavy foundation is made from the center to the rim of the basket. A woof of lighter material is then woven through the foundation. By working with two strands of material simultaneously, alternating above and below each other, the weaver can hide the basket’s foundation. Twined baskets are usually quite flexible.

“At best it is not quite so well made as the finest Hupa and Yurok ware. The technique is identical and the materials appear to be so. Achomawi baskets are softer and somewhat higher in proportion to diameter, and their pattern in consequence is less frequently disposed in a single horizontal band.”

During the nineteenth and twentieth centuries, Achumawi artisans began producing beaded bags which could be sold to tourists.

Among the Achumawi, addressing someone directly by their name was considered rude, insolent, and provocative. Names were used in referring to people who were not present. Kin terms, such as “brother” or “sister” or “grandparent,” would be used in addressing relatives. Strangers would be addressed by the name of their village.

In the Achumawi kinship system, as in many American Indian cultures, cousins were merged with siblings. A person who is considered a cousin in modern American terminology would have been considered a sibling—brother or sister—in traditional Achumawi terminology.”

Among the Achumawi, one of the fundamental spiritual concepts involved the guardian spirit. B. L. Olmsted and Omer Steward report:

“It was usually sought in a lonely mountain quest by the adolescent boy at the time when he had his nose and ears pierced.”

This vision quest was not as ritualized as that of the Plains Indians. Acquisition of a guardian spirit would make the man special:  it could make him a good hunter, an invincible warrior, a lucky gambler, or even a healer or medicine man. However, the guardian spirit could leave a person without warning or apparent cause.

The Achumawi shaman, usually called “doctor” in English, was an individual who was recognized by the community as having a special spiritual power which was acquired by direct communication with the spirit world. Both men and women could become doctors. The primary function of the shamans among the Achumawi was in healing the sick with the assistance of guardian spirits.

The process of becoming a shaman among the Achumawi is described by B. L. Olmsted and Omer Steward:

“Somewhere between the onset of puberty and the age of 25 or 30 years, the future shaman undergoes his first crisis, a genuine nervous episode lasting sometimes weeks. He appears mad, wanders around the mountains, sleeps out in all weathers, and causes great worry to his friends and relatives. They deplore his state but do not interfere. His visions continue and his general conduct suggests to some veteran shaman that he is a good prospect as an apprentice shaman.”

While it is common for religious traditions to include mythology, among the Achumawi the myths are simply stories told by the elders. Story-telling is not seen as a religious or spiritual activity, but more like a theatrical performance or the reading of a novel.

The body of the deceased would be cremated. There was no funeral ceremony. B. L. Olmsted and Omer Steward report:

“The name of the dead one was taboo; his soul had gone to the western mountains and no one wanted to give it an excuse to return, since the soul does not want to travel alone and might return to get a traveling companion from among those most dear to it.”

At the moment of death, the soul-shadow goes to the west.

Shellfish and The California Tribes