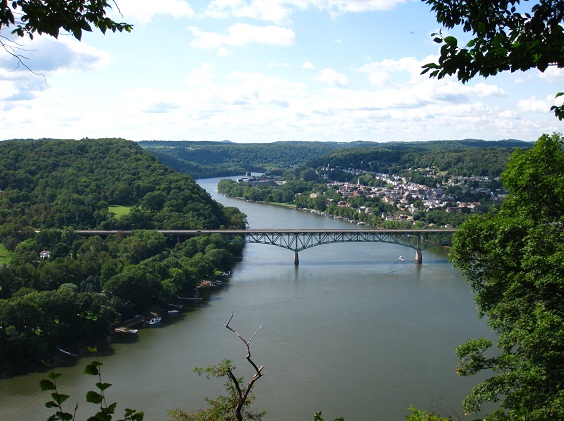 In 1928 the Army Corps of Engineers began to survey the Seneca’s Allegheny Reservation for the building of a large reservoir to reduce flooding on the Allegheny River and to provide recreation for the people of Pennsylvania and New York. This was done without the knowledge or approval of the Seneca.

In 1953 the Department of the Interior changed its position on the proposed dam: while it had formerly opposed it, it now supported the concept. The newly elected Eisenhower administration supported dam projects, particularly those proposed by the Army Corps of Engineers.

In 1956 Congress authorized the construction of the Kinzua Dam project on the Allegheny River in Pennsylvania. The reservoir from the dam would flood one-third of the Seneca Reservation, leaving untouched only the wooded hillsides and the towns occupied by non-Indians under leases executed by Congress during the nineteenth century. In authorizing the Kinzua Dam, Congress did not consult with the Seneca.

The Seneca sought an injunction against construction of the dam, citing the 1794 Canandaigua Treaty. The courts, however, ruled that under the domestic law of eminent domain, the actions of the United States were legal and that the federal government had the power to make treaties and to break them. The Supreme Court refused to review this decision, thus halting all legal means to stop construction of the dam.

Congress passed the appropriation bill for the Kinzua Dam ($4.5 million) in 1960 and a few months later a groundbreaking ceremony was held for the dam. The Army Corps of Engineers completed the dam in 1964. As a result of the project 550 Seneca people had to be relocated. In addition to living people, the dam also required the relocation of more than 3,000 Seneca graves.

The dam displaced roads and railroad tracks, items which received prompt attention from both Congress and government bureaucracies. Congress did not turn its attention to the “human welfare” – that fact that people were also displaced by the dam – until 1963. It is interesting to note that the Pennsylvania Railroad received its final payment of $20 million for relocating its railroad tracks six months before Congress began to concern itself with the cost of the “human” relocation of the Seneca.