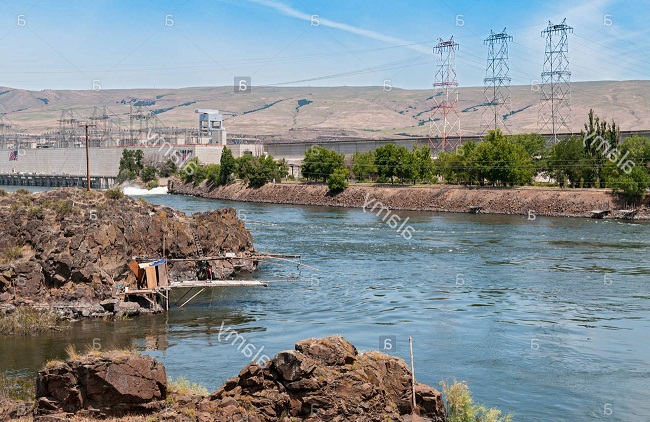 During the twentieth century, the United States viewed large hydroelectric dams as signs of progress, and as symbols of American technological superiority and modernity. In 1932, the Army Corps of Engineers submitted a 2,000 page report which called for the construction of 10 large dams on the Columbia River in Oregon and Washington. The report described the benefits of these dams, including improved navigation routes, electric power, irrigation water, and flood control. Boosters of the project promised that the electricity generated by the dams would change the culture of the area and bring in new, innovative industries. There was no concern for any possible impact on the Indian nations which have lived along the river for thousands of years, nor was there any consideration given to the spiritual meaning and use of the river.

In 1934, Frank B. Lenzie, the Bureau of Indian Affairs range supervisor in Spokane, wrote to the Commissioner of Indian Affairs expressing concern over the construction of dams on the Columbia River. His concern was that the dams would cut off the salmon run and thus impact the Indians’ income. The government, however, has little concern for Indian use of the river. President Franklin Roosevelt, when he pushed the button which started the first power unit at the Bonneville Dam, outlined a plan for ever-expanding development and more dams on the river.

In the 1950s, promotion of dam-building on the Columbia River took on a new dimension: national defense. If the United States, the Army Corps of Engineers argued, was going to defeat godless communism, then it was going to need the electrical power generated from the Columbia River dams. This provided a new sense of urgency for the construction of the dams and a new excuse for ignoring the impact of the dams on Indian cultures. At this same time, the government is fighting communism in the United States by attempting to terminate Indian nations whose communally-held lands were seen as un-American.

While the courts had long recognized that Indians have superior fishing rights along the Columbia River which they reserved under their treaties with the United States, the authorization of dams by Congress effectively took this resource from the Indians. Economic benefits for non-Indian communities-hydroelectric power, irrigation water, improved transportation-were more important than Indian resources (fish) and spirituality.

In assessing the costs of the dams, the Corps of Engineers ignored any cultural costs, particularly any spiritual or religious values of the Indian nations.

The Army Corps of Engineers managed to build 27 parks along the river, all of which were developed after the Corps promised six sites to Indian fishers. While the Corps was unable, or unwilling to find land for the Indian in-lieu fishing sites, their parks total 952 acres, more than double the land it couldn’t find for the Indians.

The government constructed seventeen dams between the salmon and their Columbia and Snake River spawning grounds. The government irrigation projects took water from the River to water non-Indian farms and then returned some of the water laden with fish-killing fertilizer and pesticides.

In 1986, Congress passed the Columbia River Gorge National Scenic Area Act. The Act itself does not recognize the Indian fishing sites along the river, but the congressional report which accompanied the Act states:

“It is the intent of Congress that previous agreements with Tribes be fulfilled and this legislation not prejudice the ability of Congress to accomplish what was promised 47 years ago. Recreation plans must recognize the need for additional sites and provide for them in the planning process, following the recommendations by the appropriate tribes.”

In 1988, the Senate Select Committee on Indian Affairs held a hearing on the situation of the in-lieu fishing sites and fishing regulations on the Columbia River. The committee brought in representatives from the Army Corps of Engineers, the Bureau of Indian Affairs, the Department of the Interior, the U.S. Fish and Wildlife Service, and the National Marine Fisheries Service. Indians from the Yakama, Warm Springs, Umatilla, and Nez Perce tribes also provided testimony.

Yakama tribal spokesman Levi George pointed out that the Columbia River was now a series of lakes and that:

“Under these lakes lies the heritage of the Yakama people. Gone are our traditional villages, camp sites, drying sheds, rapids and falls and usual and accustomed fishing places, covered by these lakes in the name of progress. Also gone are many promises made to us by the white man during the building of the dams, including promises that fish ladders at the dams would fully protect our salmon, that our fishers would not be lost through progress and that our fishing places, at least in part, would be replaced.”

In response the representative from the Corps of Engineers states:

“From a purely technical/legal perspective, we believe the Corps has met its legal obligations to provide in-lieu sites.”

The Indian Nations along the Columbia River continue to fish in the river and the river continues to be an important part of Native spirituality. Recognizing the interdependence between human people and salmon people, the tribes are using scientific methods in an attempt to maintain the salmon runs.