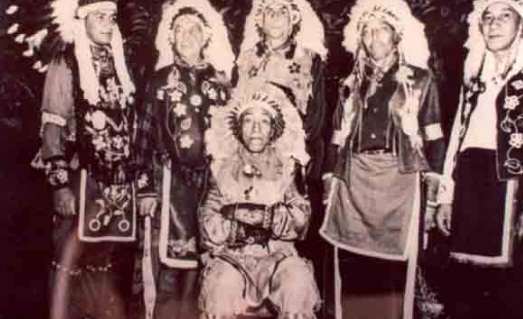 Chief Ron Yonaguska Holloway met with the United Nations Special Rapporteur on Human Rights, James Anaya on April 23, after giving a speech at the UN on April 20 regarding his case.

In that speech, it was revealed that this is the first time that a state in the US is being held accountable for the actions of its leadership regarding Native Americans.  That fact drew much attention the week of the Permanent Forum on Indigenous Issues.  The Sand Hill Tribe is the last continuously operating Lenape tribe left in the state of New Jersey.  It is one of the last “first contact” tribes left on the Eastern seaboard.  The stakes are enormous.

When Chairman Holloway met with the Special Rapporteur, he was informed that the UN is willing to represent Chairman Holloway and his Tribe – The NJ Sand Hill Band of Lenape and Cherokee Indians, and will reach out to the US Leadership to set up a meeting to negotiate a settlement.  The Rapporteur also promised to represent Chairman Yonaguska Holloway and his tribe, if necessary, at the Hague.

This story, which we have been trying to tell for the past 2 years is finally big enough to get the press it deserved all along. This case could go all the way to the World Court if the Federal Government continues to deny justice by delaying it indefinitely.  According to Chairman Holloway, “Now the case in in the hands of the world. We will see what the world thinks.”

For more on the situation: http://americanaffairs.suite10…