In 1853 Commodore Matthew C. Perry brought the American Navy to Japan and forced Japan to end its policy of isolation from the rest of the world. In the negotiations, the Japanese government had interpreters who spoke English. Since Japan had isolated itself from the rest of the world and had barred foreigners from their island nation, how did Japanese interpreters come to speak English? The answer to this question lies in the hidden history of American Indians. 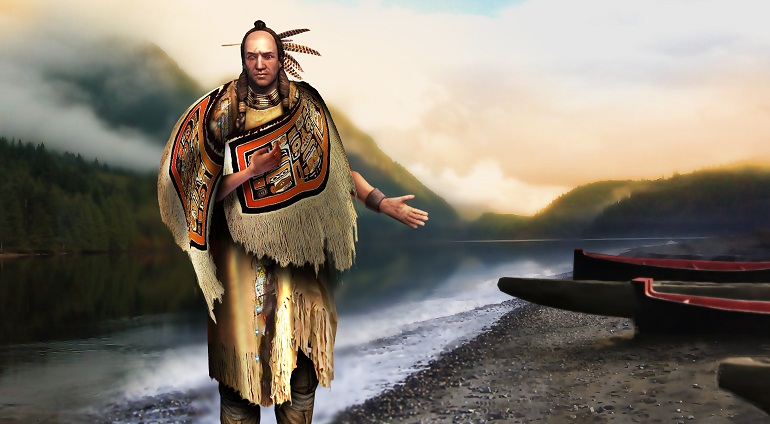 Ranald McDonald was born near present-day Astoria, Oregon in 1824. His mother was the daughter of the prominent Chinook leader Comcomly and his father, of Scots heritage, was an official in the Hudson’s Bay Company. As a Métis child in a fur trading household, he grew up hearing a mixture of languages-French, English, Gaelic, Chinook, Iroquois, and other Indian languages. Thus he was able to quickly adapt to different cultures.

As a child growing up in the Pacific Northwest, he heard many stories about Japan and about the Japanese sailors who had been shipwrecked and then rescued by the Makah, a Northwest Coast tribe whose homeland is on Washington’s Olympic Peninsula. These stories nourished within him the dream of visiting this island nation.

In 1848, Ranald McDonald made a deal with the captain of a U.S. whaling ship. The ship carried him across the Pacific and put him secretly ashore on Rishiri Island in northern Japan. When he landed he was met not by Japanese but by Ainu, the indigenous people of Japan. The Ainu, whose men have beards and abundant body hair and whose women tattooed their upper lips, do not Japanese.

The Japanese, however, soon captured him and took him to Nagasaki. Here he spent six months as a prisoner. During this time he taught English to the Japanese interpreters who would later carry out the negotiations with Commodore Perry.

He was deported from Japan in 1849, but instead of returning to the United States or Canada, he continued traveling around the world. By 1891 he had returned to Astoria, Oregon where he was respected as the only lineal descendent of chief Comcomly. He died in 1894 on the Colville Reservation in Washington. As he died in his niece’s arms, his last words were “Sayonara, my dear, sayonara…”

Today, the Japanese remember Ranald McDonald as the “first teacher of English.” There is a monument to him in Nagasaki, Japan. In addition, there is another monument to him in Astoria, Oregon with the inscription written in Japanese.