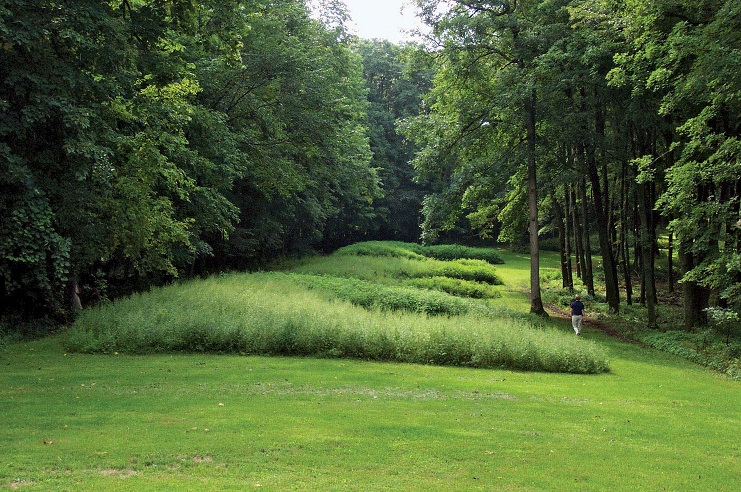 Our American and Canadian heritage begins long before Columbus supposedly “discovered” the Americas. For thousands of years people have lived in North America and they built cities and towns which were, and still are, architectural wonders. More than a thousand years ago, Indian people in the Midwest were making earthen structures-often referred to as “mounds”-in a variety of shapes. Many of these structures have geometric shapes: linear, conical, and oval. Others, however, seem to resemble birds and animals, both real and mythical. For this reason, these earthen structures have come to be known as Effigy Mounds. Archaeologists today use the term “Effigy Mound Culture” in referring  to the thousands of effigy mounds that were constructed in Wisconsin, Illinois, Iowa, and Minnesota from 700 AD to 1030 AD.

When completed an effigy mound may rise to five feet about the surrounding terrain. With regard to overall size, it is not uncommon to have mounds that are more than 100 feet in length. In Wisconsin, the bird effigy mound on the Mendota State Hospital has a wingspan of 624 feet. One effigy mound, now destroyed but mapped in the nineteenth century, had a wingspan of nearly 1,300 feet.

There are eight different types of effigies which are generally recognized: panther, bear, bird, deer, buffalo, turtle, canine, and beaver. In addition to these animal effigies, about five human figures have been identified. There are some writers who have reported effigies of squirrel, raccoon, mink, lizard, and elephant. However, it must be understood that the current categorization of the effigies is based on the imaginations of people who didn’t build them. There is no guarantee that the name given to an effigy accurately reflects the intentions of the people who constructed it.

Effigy mounds were usually constructed on an elevated area which overlooks streams and lakes. While an area may contain only a single mound,  groups up to 20-30 mounds are fairly common. The Harper’s Ferry Great Group in Iowa includes 895 mounds.

Charred human bones are occasionally found in the mounds, and the immense beds of ash at Kratz Creek suggest that cremation may have been common.

The effigy mounds are undoubtedly interesting cultural features on the landscape, but what do we know about the people who built them? Why did they build them? What importance did they have for native culture?

The archaeological record does not tell us a great deal about the Effigy Mound Culture. First, the mounds themselves contain very few artifacts. Unlike the Hopewell mound builders, the Effigy Mound people did not lavish grave goods upon their deceased. Most of the mound fills are sterile with regard to artifacts.

Second, the Effigy Mounds were not constructed as a part of a city, village, or other community. They appear to be located well away from habitation sites and therefore the archaeologists do not have any of the day-to-day refuse which is so important in reconstructing lifestyles of the past.

Third, it is difficult to associate a particular habitation site with the Effigy Mounds.  It would appear that at this time people are living in fairly small groups and so there are few, if any, intensively occupied sites which would provide archaeologists with data about their lives.

What archaeologists do know about the Effigy Mound people includes:

They have cordmarked pottery which archaeologists have categorized as Madison ware.

The fishing gear includes barbed bone harpoon points and notched stone netsinkers. This indicates that fish were a part of their diet.

Woodworking tools include copper wedges/celts and ground stone adzes and celts. This indicates two important things: (1) they were probably good woodworkers, and (2) they were not a “stone-age” culture as they were using copper tools.

Hideworking tools include deer bone beamers and bone and copper awls. This is an indication of the importance of hunting, particularly big-game hunting, in their culture.

They made clay elbow pipes. The pipes have expanding trumpet-like bowls with elbows ranging from as high as 90° to as low as nearly 0°.

There are a number of things missing from their cultural inventory. First, there is the absence of grinding stones, hoes, and other tools normally associated with intensive plant collecting, processing, and/or cultivation. There is some evidence that cultivated plants, including corn, were grown and consumed, but it appears that there was little reliance on this food source. Corn may have been a ritual food rather than a part of the everyday diet.

Second, the habitation sites do not have any storage pits or structures. This suggests that habitation sites were temporary, seasonal sites which would be consistent with hunting and gathering rather than agriculture.

Third, there is an absence of non-local materials, such as marine shells and exotic lithics (such as obsidian). This may be interpreted as a lack of trade with other people.

All of this has led archaeologists to describe the Effigy Mound people as having a foraging subsistence pattern (that is, they were hunters and gatherers) with little dependence on agriculture. The data seems to suggest that they had a nomadic lifestyle. The seasonal cycle of the Effigy Mound Culture people involved:

harvesting nuts and deer in the late fall, winter, and early spring.

fishing and gathering resources from a lowland area in the late spring, summer, and early fall.

Building mounds in the summer.

As a nomadic, foraging people it is therefore assumed that they had an egalitarian society which included a nonhierarchical political system.

In West-Central Illinois, the effigy mounds may have been the place where members of different groups could meet to exchange information, maintain alliances, and initiate exogamous relationships. While raiding or warfare appears to have been common, interaction and ritual at such sites would have provided opportunities to minimize hostilities.

One traditional view expressed by many archaeologists is that the effigy mound groups served as integrative mechanisms, the institutional means for coordinating and articulating the cultural activities of numerous hunting and gathering societies. By coming together during the summer, different bands would be able to reinforce their social bonds. Burying the dead in the mounds may be one way to reinforce this association and to tie the groups together.

Some archaeologists have suggested that the Effigy Mound people used both mound construction and rock art as a way of sanctifying the land. In other words, these activities were a way of making the land sacred and associating themselves with this sacred land.

While all of the evidence at the present time suggests that these elaborate, artistic structures were built by hunters and gatherers-disproving the commonly held idea that only agricultural people could build great structures which require the coordinated efforts of many people-we don’t really know why they were built, nor do we really know the role which they played in the Effigy Mound Culture.