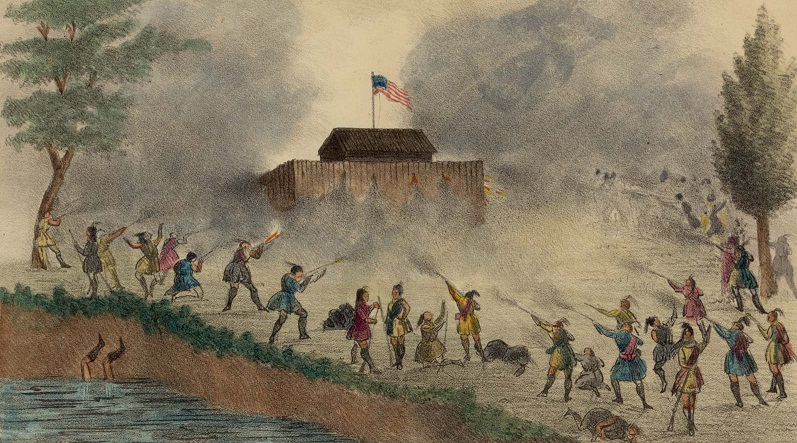 Contrary to some popular opinions, there was no traditional overall governmental or political organization among the Seminole at this time. They tended to be politically organized around busk groups, each of which had its own medicine bundle on which the annual busk (green corn) ceremony was focused. Thus the military actions against the U.S. military did not have a single leader or coordinator.

In this diary, I’m going to look at the Second Seminole War.

The Second Seminole War (1835-1842) stemmed from the American policy of removing all Indians from east of the Mississippi River and relocating them in Indian Territory (present-day Oklahoma). Many of the Seminole, however, were not in favor of removal and resisted American attempts at forcing their removal.  The war began when a group of anti-removal warriors under the leadership of Osceolo killed Charley Emathla, a pro-removal leader, and Wiley Thompson, the Seminole agent. Over a period of seven years, the United States spent nearly $40 million dollars in trying to defeat, capture, and remove the Seminole. As a result of this conflict, most of the Seminole were relocated onto the Creek Nation in Oklahoma. When the government troops withdrew in 1842, declaring victory, several hundred Seminole remained in Florida.

The 1832 Treaty of Payne’s Landing, signed by Seminole leaders Charley Emathla and Foke Luste Hadjo, required all Indians to leave Florida in exchange for lands in Indian Territory, plus grants of clothes and money. The men who signed the treaty were not empowered to represent the Seminoles, and the treaty was therefore clearly fraudulent. Micanopy did not make his mark on the treaty and yet his name appeared on the treaty.

As one excuse for the treaty, the U.S. government had declared that the land reserved for the Seminole in Florida was not worth cultivating, a fact well-known among the Seminole. However, the more important reason involved runaway slaves and the conflicts between slave-owning Americans and the Seminole. From a Seminole perspective, they were facing starvation due to a prolonged drought which provided some incentive for signing the treaty.

The Treaty also specified that any Seminole with Black blood are to be considered runaway slaves and are to be returned.

In 1834, the Americans held councils with the Seminole to discuss their removal to Indian Territory. While it was clear that the majority oppose removal, the Indian agent informed them that they were to sell their cattle and horses in preparation for removal and to move to the port of embarkation. If they do not do this, they are told, U.S. troops would use force against them.

In 1835, 25 Seminole leaders meet with the American Indian agent to discuss their removal concerns. One of the Seminole concerns was the fate of the Blacks who were living among them. Some of the Blacks had married Seminole; they dressed like Seminole; they spoke the language; and they took part in both hunting and war parties. Yet the Americans had encouraged slave-owners to seize many of these Blacks, an action that aroused a great deal of bitterness among the Seminole. Osceola was one of the leaders who opposed the surrender of runaway slaves. Osceola then made some nasty comments to the Indian agent and was placed in irons and jailed. He was released when he agreed to sign an acceptance of the two treaties requiring the Seminole to be removed to Indian Territory.

A short while later, a war party led by Osceola ambushed Charley Emathla, the Seminole leader who signed the removal treaty with the Americans. As a symbolic gesture, Osceola scattered the money Emathla received from the Americans over his dead body. Osceola’s warriors then ambushed Indian agent Wiley Thompson, killing seven of the Americans. Warriors led by Alligator, Miconopy, and Jumper attacked American soldiers near Tampa Bay, Florida and killed 105 of the 108 soldiers. This marks the formal beginning of the Second Seminole War.

The standard military philosophy which the Americans had used against other Indian tribes-to bring in a massive force, build forts, and to attack villages-failed to work against the Seminole. The Americans were unfamiliar with the terrain and the swamps proved good hiding places for the Seminole.

In 1836, the United States negotiated a deal with Creek leaders Opothle Yaholo, Little Doctor, Tukabahchee Micco, and Yalka Hadjo in which the Creek were to supply 600 to 1,000 warriors for service against the Seminole. The warriors were to be paid like soldiers and they would be able keep plunder (taken to mean slaves) which they captured from the Seminole. Believing that the Seminole War would be of short duration, 776 Creek warriors under the leadership of Jim Boy enlisted in the army. They assumed that they will be released from duty in time to remove to Oklahoma and get their crops planted in the spring. The following year, however, they found that their enlistments had been extended.

In 1837, Seminole leaders Jumper, Davy Elliott, Cloud, and Alligator signed an agreement with the Americans that an immediate cease fire was in effect for the Second Seminole War. The Seminole leaders gave their word that they would remove to Indian Territory.

A party of about 200 Mikasuki Seminole under the leadership of Osceola and Sam Jones, traveled from Fort Mellon to Tampa where they seized Micanopy, Jumper, Cloud and their followers. They then fled to the interior with their captives.

The cease fire gave the Seminole bands a chance to grow and harvest some crops, to obtain more gunpowder and firearms and to prepare for the resumption of the war.

Most of the battles of the Second Seminole War were guerilla skirmishes in which small groups of Seminole warriors quickly vanished. One of the largest battles of the war was the 1837 Battle of Lake Okeechobee. Alligator, Arpeika, and Wildcat led their Seminole warriors against Colonel Zachary Taylor’s troops. The Americans, with 1,000 soldiers, were under orders to destroy any Seminole force which they meet. The American troops were met with well-directed fire from the Seminole warriors. The battle left 26 soldiers dead and 112 wounded. The Seminole casualties included 11 dead and 14 wounded.

By 1838, the Americans had learned a lot about the Seminole hiding places. Along with Indian allies from a number of tribes, the American forces were attacking Seminole camps, burning their houses, capturing their livestock, and destroying their fields. During this time, the Seminole began to adopt the chickee-an open-sided shelter that was easily constructed-and to make their clothing by sewing rags together.

In 1840, a band of nearly 100 Seminole warriors under the leadership of Wildcat ambushed an American army detachment, killing a lieutenant and five soldiers. The group then attacked a number of unescorted wagons traveling to St. Augustine. In response to these attacks the army searched through Big Swamp. They destroyed 500 acres of Seminole corn fields. When the troops had finished searching an area, the Seminole usually moved back in.

In 1840, the army tried using bloodhounds to track down the Seminole. Nearly three dozen dogs were imported from Cuba to be used in the military campaign against the Seminole. The effort failed.

In 1840, the Americans offered Seminole chiefs Tiger Tail and Halleck Tustenugee $5,000 each if they would bring in their bands for removal to the West. The Seminole considered the matter for two weeks while eating army food. The leaders and the warriors then declined the offer.

In 1841, the American army began a scorched earth policy in their war against the Seminole. The soldiers burned all crops, canoes, and shelters that they find. In response Wildcat surrendered to the army. He and two of his aides were dressed in Shakespearian costume from trunks which they had captured from a theatrical company.

Halleck Tustenuggee, Tiger Tail, Nethlockemathlar, Octiarche, and 120 of their warriors met in council at the Long Swamp and they agreed that no peace terms with the Americans were to be accepted. Furthermore, they declared that any Seminole or Black who attempted to deliver such terms was to be killed. Similarly, the Big Cypress Seminole bands under the leadership of Billy Bowlegs, Sam Jones, the Prophet, Hospetarke, Fuse Hadjo, and Parsacke met in council and agreed that anyone who brought them terms of surrender from the Americans would be killed.

In 1842, the Seminole under Billy Bowlegs surrendered and the government announced the end of the Second Seminole War which cost the United States the lives of 1,500 soldiers and $30 million. Bowlegs refused to relocate in Oklahoma and was given a small piece of land in the Great Cypress Swamp.

The Seminole understood if they remained in Florida they would receive no money or food but would be allowed to occupy their land. While the agreement allowed the Seminole to remain peacefully in Florida, the policy of the federal government was that they should be removed to Indian Territory. Therefore, their reservation was not to have any permanent or exact boundaries. The American understanding of the agreement was that the Seminole would be allowed to remain “for a while.”