The Wea are a relatively unknown tribe who were living in the Ohio Valley with the Miami and the Piankashaw when first encountered by the Europeans. Their tribal name has been recorded a number of ways including Ouaouiatanoukak, Aoiatenon, Wah-we-ah-tung-ong, Warraghtinooks, and Wyantanons. While the Wea are often grouped as a part of the Miami and merged into this tribe during the 19th century, they were a distinct and independent tribe prior to this time.

Linguistically, the Wea spoke an Algonquian language and are closely related to the Miami, Piankashaw, Atchatchakangouen, Kilatika, Mengakonkia, and Pepikokia.

The Wea were affiliated with the Illinois Confederacy. The Illinois (or Illini) were a confederacy of Algonquian-speaking groups which included the Kaskaskia, Tamaroa, Tapouaro, Coiracoentanon, Moingwena, Espeminkia, Chinkoa, Chepoussa, Kahoki, Michigami, Wea, Piankeshaw, Peoria, Mascouten, and Miami. This confederacy was one of the largest American Indian groups in the Central United States area at the time of the first European contacts. The confederacy in 1670 had a population of about 10,500. 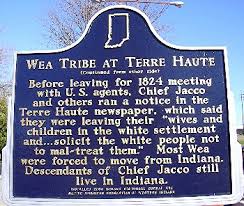 The Wea also raised some corn and the early European explorers remarked on their extensive corn fields.

Traditionally, the Wea occupied both a summer village and a winter hunting camp. The summer village would usually be located along a stream or river. A large council house would be used for public meetings.

Children were often named by an elderly woman selected by the mother. This name would often be associated with the child’s clan. As an adult, people could change their names in order to avoid illness or misfortune.

Physical punishment of children was extremely rare. However, it was common for the children to be lectured daily on proper behavior. At puberty, both the boys and the girls would undergo a vision-quest. Children would begin preparing for the vision quest while quite young by fasting for periods of increasing lengths.

With regard to families, the Wea, like many other Algonquian-speaking tribes, had patrilineal clans. Thus, each person belonged to the clan or extended family of the father. The number of Wea clans and their names is no longer remembered.

As with many other tribes in the area, each Wea band or village had more than one chief. Peace chiefs were concerned with the administration of daily life and were not allowed to participate in war parties. Peace chiefs were expected to provide for those in need and therefore their property was available to anyone who needed it.

War chiefs were primarily concerned with the ritual aspects of war. The decision to go to war would have been traditionally made by a council of war chiefs. There is some evidence that each clan may have had a war chief.

While the peace chiefs and war chiefs were usually men, the Wea also had female chiefs who supervised major feasts and prepared the supplies for war parties. As with other tribes in the area, women could also participate in war parties.

In 1650, the population of the Miami, including the Wea and the Piankashaw, in the Ohio Valley was estimated at 4,500.  The largest of the Wea settlements at this time as Ouiatenon.

In 1658, the Mascouten and the Wea established a mixed village near Green Bay, Wisconsin. Two years later, they moved their village to the Fox River portage south of Lake Winnebago. The village at Green Bay was too exposed to attack by the Iroquois. In spite of this move, in 1665 the village was attacked by the Iroquois.

In 1750, the Wea under the leadership of Le Comte settle at Old Briton’s Miami village of Pickawillany in present-day Ohio. The Wea felt that they had been ignored by the French and Pickawillany served as a British trading post. The following year, the Wea and the Piankashaw signed a treaty with the British and accepted an alliance with the Pennsylvania colony.

During the American Revolution, the Miami, knowing that the loss of their lands would be a consequence of an American victory, allied themselves with the British. Initially, the Wea declared their neutrality, but later joined with the Miami to oppose the Americans.

In 1791, the Miami under the leadership of Little Turtle and the Shawnee under the leadership of Blue Jacket attacked the encampment of the new territorial governor. In a battle that lasted for about three hours, the Americans were defeated. In their retreat they left behind 630 dead and 283 wounded. While this was a major defeat for the American military, there was retaliation by both the army and by militia groups. Since the Wea were a part of the Miami, part of this retaliation focused on them.

President George Washington ordered the Brigadier General of Kentucky to lead a punitive expedition against the Wea settlements. The American forces-33 officers and 760 mounted Kentucky volunteers-attacked Ouiatenon. The Wea were caught unaware and panic ensued. The Americans captured 41 women and children, burned the village, and destroyed several hundred acres of growing corn.

The following year, Henry Knox, the Secretary of War, sent a letter to the Indians in the Old Northwest Territory addressing their concerns that the United States wants to drive them out:

“We should be greatly gratified with the opportunity of imparting to you all of the blessings of civilized life, of teaching you how to cultivate the earth, and raise corn; to raise oxen, sheep, and other domestic animals; to build comfortable houses, and to educate your children, so as ever to dwell upon the land.”

Knox, like many Americans both at the time and still today, was apparently unaware that the Indians had been farming for many centuries and that their agricultural surpluses had supported the early European colonists.

In 1805, in the Old Northwest Territory, the Wyandot, Chippewa, Ottawa, Munsee, Delaware, Shawnee, Potawatomi, Miami, Eel River, and Wea gave up claims to land in Ohio and Indiana. The negotiations were undertaken on behalf of the Connecticut Land Company, in spite of the fact that negotiations for land by private companies or states was not allowed under federal law.

The Wea migrated from Illinois to Missouri in 1820.

Treaties were signed in Washington, D.C. in 1854 with the Otoe, Missouria, Omaha, Delaware, Shawnee, Peoria, Piankashaw, Wea, and Miami.  As a result of these treaties, the tribes ceded nearly 14 million acres to the United States.

In 1854, the Wea and the Piankashaw formally merged with the remnants of the Illinois tribes and became the Confederated Peoria. After this time, the Wea ceased to exist as a separate and independent tribe.