When the Europeans first arrived in North America the Lenni Lenape were living on the east coast near Chesapeake Bay. The Europeans would later give them the name Delaware.  The oral traditions of the Lenni Lenape-some of which were recorded pictorially on bark, a practice found among other Alongquian-speaking tribes-tell of their migrations from lands in the far west (interpreted as Central Asia) to the Atlantic coast.

According to the Lenni Lenape oral tradition, they migrated east in North America until they came to the Mississippi River (Namaesi Sipu or River of Fish). Here they encountered the Iroquois who had also migrated from the west. Lenni Lenape scouts reported that the lands east of the Mississippi were inhabited by a very powerful nation, which they call Alligewi, who had many large towns built on the great rivers which flowed through the country. The Lenni Lenape sent a message to the Alligewi asking for permission to settle in their territory, but this request was refused. Instead, the Alligewi gave them permission to pass through the country to seek a settlement farther to the east.

After crossing the Mississippi to continue their migration to the east, the Lenni Lenape were suddenly attacked by the Alligewi. Forging an alliance with the Iroquois, the Lenni Lenape went to war against the powerful Alligewi who were living in fortified towns. No quarter was given, so that the Alligewi, finding that their destruction was inevitable, abandoned the country to the conquerors, and fled down the Mississippi river. 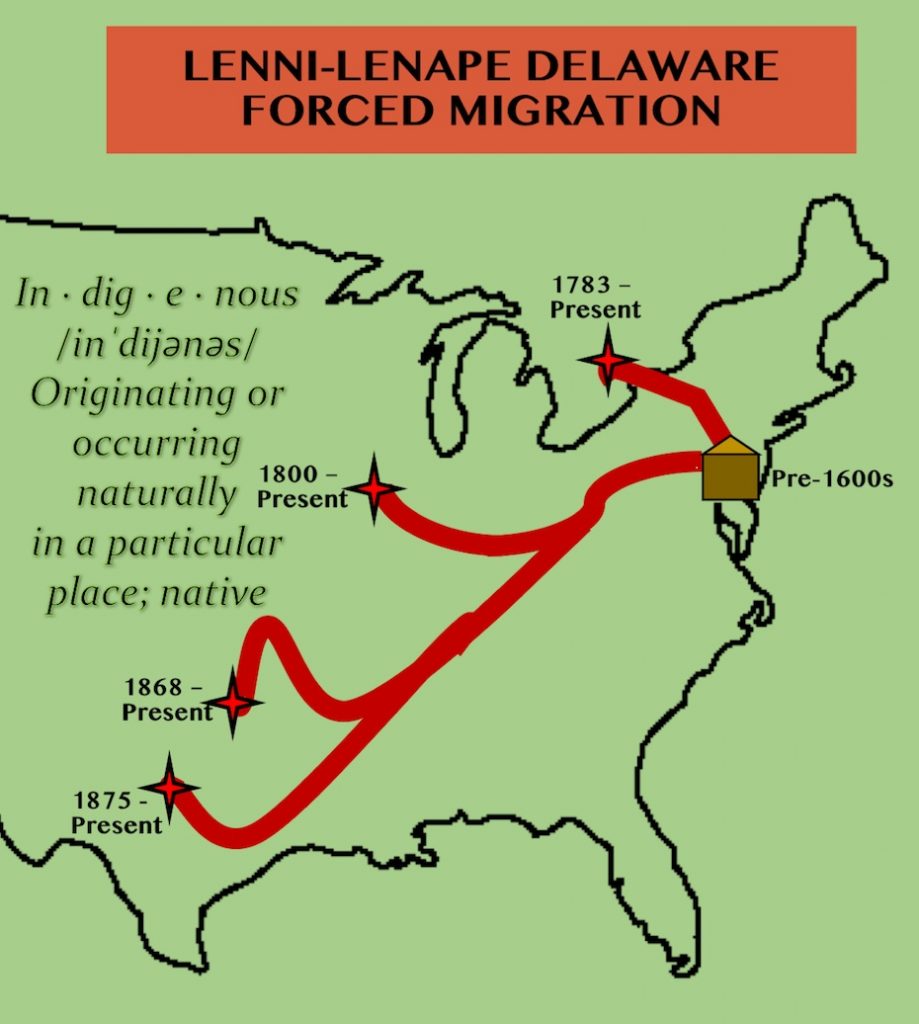 According to Lenni Lenape oral tradition, the war with the Alligewi lasted for many years. While many Lenni Lenape warriors were killed, their allies, the Iroquois, always hung back so that their losses were not so great. Still, following the war, the newly conquered land was divided between the Lenni Lenape and the Iroquois. The Iroquois took the lands to the north, in the vicinity of the Great Lakes, while the Lenni Lenape took the area to the south.

For a long period of time-perhaps many hundred years-the two nations resided peaceably in this country. During this time, some of their hunters and warriors crossed the great swamps, and then followed the streams eastward down to the great Bay River, and to Chesapeake Bay. In small groups, the Lenni Lenape settled on four great rivers which would later be called the Delaware, Hudson, Susquehannoah, and Potomack.

“the whole of their nation did not reach this country; that many remained behind in order to aid and assist that great body of their people, which had not crossed the Namaesi Sipu, but had retreated into the interior of the country on the other side, on being informed of the reception which those who had crossed had met with, and probably thinking that they had all been killed by the enemy.”

On the Atlantic coast, the Lenni Lenape divided themselves into three separate tribes: Turtle, Turkey, and Wolf. According to oral tradition, from these three tribes came many other tribes. In the east, they mixed with people from other tribes, intermarried, and merged languages. In this way, the Mohican people came into existence.