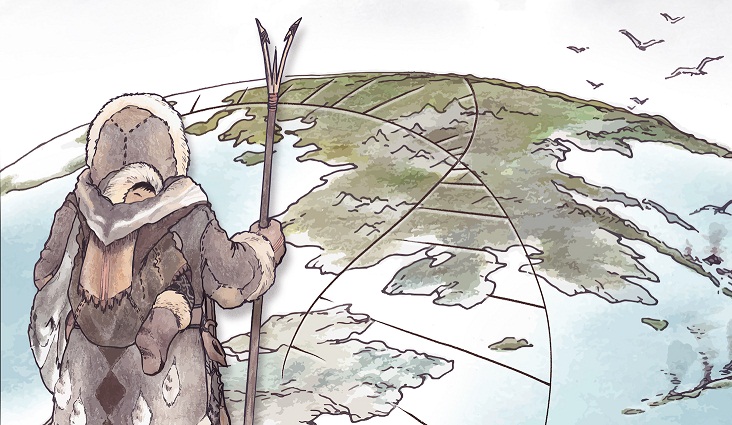 It is not uncommon for accounts of American history to begin in the fifteenth century with the Spanish voyages of exploration. What the Europeans found was not a wilderness, but a land which had been settled by and developed for American Indians. By five thousand years ago there were many different cultural adaptations. In this essay, I’d like to briefly describe a few of the events which happened about five thousand years ago in the area which would later become the United States.

One of the most important agricultural products in the world today is corn (maize). Originally domesticated in central Mexico, it had diffused to the American Southwest (Arizona and New Mexico) by 3000 BCE. This means that by this time, American Indian people had learned about the plant, including how to plant it, care for it, harvest it, and process it into food products. The diffusion of corn into the Southwest begins to set the stage for the development of technologically advanced cultures such as those of the Hohokam and the Ancestral Puebloan.

By 3000 BCE, the Ohlone had begun to settle near San Francisco Bay. The Ohlone merged by conquest and marriage with earlier inhabitants of the area, probably a Hokan-speaking people related to the Pomo and Esselen. The people exploited a seacoast ecology, particularly shellfish. Some of their shellfish debris mounds would grow to 270 feet in diameter and 30 feet deep.

Farther south, in the Los Angeles area, Indian people in the Zuma Creek area were collecting mussels, abalone, and other shellfish. Archaeologists have found a disproportionate number of handstones and milling stones which shows that the Zuma Creek inhabitants gathered and processed large amounts of plant foods.

Near Santa Barbara, the Indian people of what archaeologists call the Campbell tradition were utilizing coast resources, including seal, fish, and shellfish.

Indian people occupied the Lower Jackson Mound site by 3000 BCE. Material remains at the site included small red jasper beads which were sometimes shaped in the form of an animal. Some frog effigies were also found at the site.

At what is now the campus of the Louisiana State University, Baton Rouge, Indian people built two conical mounds, the largest of which is 120 feet in diameter and 16 feet high.

In the Great Lakes area, there was an increase in population about 3000 BCE. The Indian people in this area, called Lake Forest Archaic by archaeologists, were hunting, gathering, and fishing. Deer, black bear, and beaver were frequently hunted.

Also in the Northern Plains at this time, the tool tradition which archaeologists call the McKean Complex emerged. This was a focus on communal buffalo kills as well as the communal hunting of deer, pronghorn, and mountain sheep. The McKean projectile point was lanceolate in shape. One of the distinctive features of this complex was the side-notched knife that is similar to a large projectile point. This tool would be resharpened on one blade edge until worn out and then discarded.

Along the lower Snake River in eastern Washington, the phase which archaeologists call the Tucannon phase had begun by 3000 BCE. The Tucannon tool kit included crudely chipped corner-notched and stemmed points, some chipped knives, and edge-flaked cobbles. There were also hopper mortars, pestles, and net sinkers made out of ground stone. The people at this time were hunting elk, deer, and antelope. They were also taking salmon from the river.

About 3000 BCE, the Indian people in New Jersey were using cremation burials. This complex featured an elaborate pattern of mortuary ceremonialism that emphasized cremation. It also included the ritual use of red ochre. The burials included valuable, imported grave goods. It is not uncommon for grave goods to be “killed” (intentionally broken) in order to release the spirit of the item so that it can travel with the deceased to the afterlife.

In Maryland, Indian people were occupying the Accokeek Creek Site by 3000 BCE. They were using the site as a temporary hunting, fishing, and gathering camp. Indian people probably lived at this site for a few weeks or months each year. They would later abandon the locality for a few years or decades, and later reoccupy it seasonally for a while, and then again abandon the area. The Indian people at this time lived in small, family groups, probably having few or no social, political, or economic ties with any other group.

With regard to material culture, they carved bowls out of soapstone which they obtained from a site about 15 miles away. These bowls were oval, hemispherical, or roughly rectangular in shape. They had flat bottoms, and some had knobs on the sides for handles. The bowls generally held a quart or two.

In Texas, burned rock middens began to appear about 3000 BCE as Indian people utilized high density food such as nut crops, deer, and rabbits. Several small bands would come together seasonally to occupy campsites where these foods were found.