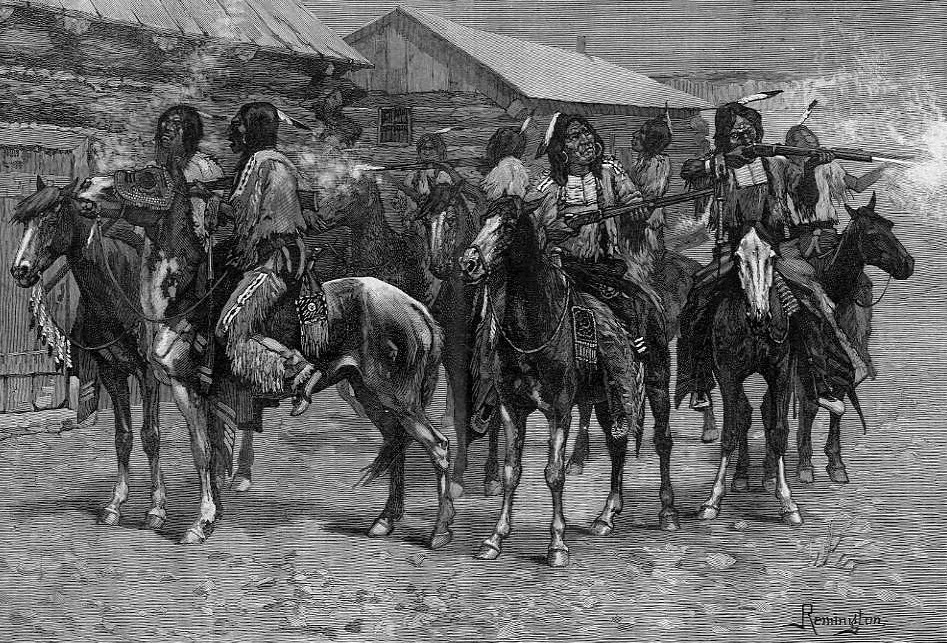 Among the Indian nations of the Northern Plains, individual success in war was usually credited to the power of personal war medicine. This war medicine might be acquired in a dream or vision in which a spirit would give the young warrior protection from harm. War medicine often involved a war song, face paint, and a sacred object to be worn during raids. In 1887, a young Crow warrior named Wraps Up His Tail participated in a Cheyenne Sun Dance where he received a powerful vision. As a result of this vision, the Cheyenne gave him a ceremonial sword and the new name – Sword Bearer.

As a result of his vision, Sword Bearer, claimed that no harm could come to him because of the sword. When Sword Bearer told some of the other young warriors that he intended to raid against the Blackfoot, several of the young warriors were eager to follow him on the war path. Among the Crow, the main purpose of warfare was to build wealth and reputation by daring actions which demonstrated that the warrior had strong spiritual power.

Sword Bearer led the Crow war party against the Blackfoot who had stolen their horses The successful party returned with the Crow horses as well as several Blackfoot horses. They returned home in a traditional Crow fashion, but instead of circling the camp, they circled the Indian agent’s house to proudly announce their victory.

The Indian agent, ignorant of Crow customs and aware that the Crow intensely disliked him, responded to this display by ordering Sword Bearer and his warriors to be arrested for horse stealing. The Indian agent lived on the reservation in fear of his life and had ordered a double row of guards around his house. Thus when the triumphant Sword Bearer and his warriors returned, circling his house and firing their guns in the air, the ignorant agent was very frightened. Some of his non-Indian contemporaries described the agent as a “bully” and a “man without vision.” While he was a stockman with the vast acreage of the Crow Reservation at his disposal, he showed no understanding of why the Crow would want to avenge the horse raids against them by other tribes.

Sword Bearer and his warriors had anticipated a warm welcome with feasting and dancing. Within the context of Crow culture, they had conducted themselves admirably by recovering the stolen horses and capturing Blackfoot horses. Sword Bearer, by leading a successful raid in which none of his warriors had been injured, had accomplished one of the four deeds required for chiefly status.

The Indian agent, however, simply viewed the young warriors as hot-headed savages and horse thieves. In addition, he felt that they had shot at him. The warriors, in his viewpoint, had to be punished. Thus Sword Bearer, instead of finding honor awaiting him, found that he was a wanted criminal.

Sword Bearer and his warriors fled to the mountains. Soon Montanans were pleading with the government to send in troops to put down this Indian uprising. Using the superior firepower of Hotchkiss guns, the army soon persuaded most of the young warriors to surrender. Sword Bearer was then killed by Fire Bear, an Indian police officer, after he had surrendered.

Thus ended the only Crow “war” with the United States. It was a conflicted generated because a few Crow teenagers were misunderstood by a bigoted Indian agent.