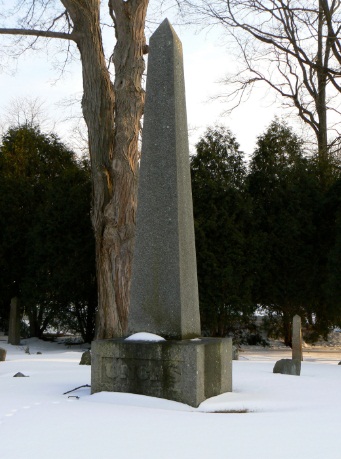 In 1842, the monument for Mohegan leader Uncas was completed in Norwich, Connecticut. Historian William Leete Stone traveled from New York City to speak at the unveiling. Stone told people that Uncas

“was the white man’s friend, at a period when the friendship even of savage royalty was most welcome.”

He also said of Uncas:

“In a different hemisphere, and belonging to another race, he might have been at least a Turenne, a Marlborough, or a Wellington, if not a Gustavas, a Kosciusko or a Washington.”

In his speech, Stone showed no awareness that the Mohegan people still existed. For Stone and most of the non-Indians living in New England, the Mohegans and other Indians who had once inhabited the area were extinct. Uncas, to them, was simply an actor in a colorful story from the past.

Shortly after the monument had been dedicated, John Uncas, the last male descendent of Mohegan leader Uncas, died and was buried next to the Uncas Monument. The local newspaper reported his death as “The Last of the Mohegans.” According to the newspaper:

“The passing away of a whole tribe of men, once the free, dauntless lords of the soil, is certainly well-calculated to awaken sensibility; and the contemplation of the oppression and wrongs under which they have dwindled away, and finally perished, naturally excites painful emotions.”

“we are not necessarily responsible…for the extinction of the Indian race, though we may well blush at the remembrance of the wrong and outrage they have suffered at our hands.”

Uncas first appears in the European historic record in 1633. At this time, following internal dissension, a group of 2,000 Indians under the leadership of Uncas left the Pequot in Connecticut and formed a separate nation known as the Mohegan. The focus of the internal dispute was trade: the Pequot sachem Sassacus favored trading only with the Dutch, while his son-in-law Uncas favored trade with the English.

With the death of Pequot paramount sachem Tatobem at the hands of the Dutch in 1634, Sassacus became the new paramount sachem. Sassacus was generally a weaker and less effective leader and the Mohegan sachem Uncas began to contest the Pequot authority over his tribe.

In 1637, Uncas, the leader of the Mohegan, and 70 warriors traveled to Hartford eager to join the English in a war of retaliation against the Pequot. Uncas hinted to the English that the Pequot were planning to attack more English settlements. The English viewed the Pequot as the “Children of Satan.”

English troops, supported by the Mohegan as well as some Narragansett and Niantic attacked the Pequot village of Mystic. Here they found primarily women and children.  In less than an hour an estimated 700 Pequot were killed-burned, shot, or slashed to death-and 200 fled to the neighboring Narragansett, where they were seized by the English and the women and children sold into slavery in the West Indies. This broke the Pequot hegemony over the region.

When the English asked Uncas to provide them with a list of the names of the Pequot living among his people, Uncas simply told them that he did not know their names. The English knew that Uncas had incorporated Pequot survivors into Mohegan communities. They also knew that he encouraged these Pequot to continue their raids against the Narragansett.

The two Indian nations agreed to end the enmity between them. The treaty of peace was dictated to them by the English. If one tribe wronged the other, they agreed not to seek revenge, but to appeal to the English. They also agreed not to shelter any enemies of the English. In this way the English sought to establish control over Indian affairs. It established a relationship between the governor of Connecticut and the sachems similar to that between a superior and inferior sachem.

In 1638, Mohegan sachem Uncas married one of the widows of the Pequot sachem Tatobem. At this time, Uncas had several wives-six or seven-most of whom were women of high status. His marriages to these women helped him legitimize his claim to lead the Pequot and their former tributaries. They also helped him to construct a new native political entity upon the ruins of Tatobem’s chiefdom.

In 1639, Mohegan sachem Uncas informed the English that a number of Pequot had settled along the banks of the Pawcatuck River. The Pequot in this area, according Uncas, were tributaries of the Niantic and had returned to this area with the support of Ninigret, a close ally of the Narragansett sachem Miantonomi.

The next morning, the English and Mohegan awoke to find a war party of about 300 Niantic and Narragansett warriors across the river from them. The Narragansett tell them:

“The Pequots who live here are good men and we will certainly fight for them and protect them.”

In 1640, Mohegan sachem Uncas married the daughter of Sebequanash, the Hammonasset leader called the Squaw Sachem by the English. This marriage gave Uncas some claim to the Hammonasetts’ land, which lay along the coast between the Connecticut River and present-day Guilford. He promptly sold these lands to the English.

In 1640, Uncas also gave most of his people’s lands to the governor and magistrates of Connecticut.

In 1643, Uncas and a group of his warriors were attacked as they paddled down the Connecticut River. The attack was led by the Narragansett sachem Sequassen, who was a close friend of Miantonomi. Uncas responded to the attack by leading a war party against Sequassen’s village. The Mohegan killed several enemy warriors and, copying the scorched-earth tactics of the English, they then burned the village.

Miantonomi assembled a force of about 1,000 warriors to attack the Mohegan village of Shantok. Uncas assembled about 400 warriors and met Miantonomi’s warriors about four miles from the village. Uncas then called for a conference with Miantonomi. This was the first time the two sachems had spoken to each other since the signing of the Hartford Treaty, five years before. Uncas challenged Miantonomi to personal combat, but Miantonomi refused. At this time, Uncas suddenly dropped to the ground and his warriors, at this signal, let fly a shower of arrows upon the Narragansett warriors. As a result, the larger force of Narragansett warriors, taken by surprise, fled and was pursued by the Mohegan warriors. Thirty Narragansett warriors were killed.

Miantonomi was captured by the Mohegan sachem Tantaquidgeon and was taken to the Mohegan town of Shantok. While Uncas received presents from the Narragansett for the release of Miantonomi, Uncas delivered his prisoner to the English authorities.  At the meeting of the United Colonies Miantonomi was accused of violating the Treaty of Hartford and of plotting against English. Unable to legally execute Miantonomi, the colonists asked the Mohegan to execute him with an English witness. Following his execution, he was buried in a solitary grave rather than in the communal cemetery. The Mohegan then became the dominant Indian nation in southern New England.

In 1645, the Narragansett under the leadership of Pessicus invaded Mohegan country. The first attack against the Mohegan was against a seasonal camp in which six Mohegan men and five women were killed. Pessicus called upon his allies to join him in his war against Uncas and the Mohegan. Uncas appealed to the English for help. Among those joining the Narragansett were the Niantic under the leadership of Ninigret and some groups from Long Island. In addition, some Pequot who had been tributaries of Uncas shifted their allegiance to the Narragansett as they were promised wampum.

Many Mohegan took refuge in Shantok Fort. The Mohegan were losing the war and had no place to go.  Pessicus simply needed to wait until the Mohegan ran out of food. No one knows exactly how long the siege lasted. The English managed to reach the fort and provide Uncas with supplies.

Faced with English opposition, and knowing the English reputation for total destruction in warfare, Pessicus went to Boston to negotiate his way out of war. With the threat of war against the English, the Narragansett and Niantic signed a coercive and humiliating treaty of peace. In the treaty they agreed to perpetual peace with both the English colonies and the Mohegan under Uncas.

In 1646, the English began laying out a settlement at Nameag in the Pequot county. Mohegan sachem Uncas welcomed the English as an ally. The English, however, cultivated a friendship with Robin Cassacinamon, the leader of the Nameag colony. Cassascinamon saw an alliance with the English as a way of freeing himself from the control of Uncas.

Since the English were short of food, they asked Robin Cassacinamon and Wequash Cook, the sachem of the Pequot community of Pawcatuck, to hunt for them on the east side of the Thames River. However, Uncas regarded these lands as his through a marriage to a Pequot woman. He assembled a party of 300 warriors and ambushed the hunting party. The Pequot fled and were pursued by Uncas. At Nameag, the Mohegan warriors plundered the Pequot wigwams, destroyed them, and then humiliated the Pequot warriors by cutting their hair. No one was killed. Uncas succeeded in punishing Cassacinamon for trespassing into Mohegan hunting territories. He also demonstrated to the Pequot that it was he, and not the English, to whom they must look for protection and security.

Through his alliance with the English colonists, Uncas managed to maintain his tribe in a powerful position with regard to other tribes in the area. During King Philip’s War of 1675-1676, Uncas allied himself with the English against Philip and his son Oneco went into battle with the English. In spite of his friendship with the English, however, Uncas discouraged his people from converting to Christianity.

Uncas died about 1682. It is estimated that he was about 76 years old at the time of his death. The character of Uncas in James Fenimore Cooper’s The Last of the Mohicans is a fictionalized version of the Mohegan leader.

The Navajo, Sheep, and the Federal Government