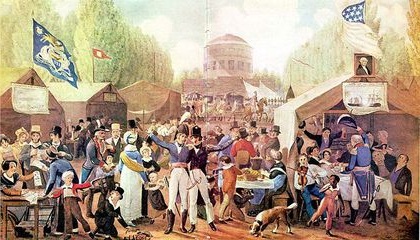 Two hundred years ago, in 1819, the United States was just beginning to embark on its expansionist policy known as Manifest Destiny. Under this policy, many non-Indian Americans felt that it was the divine destiny of the United States to expand and to spread American culture, language, and the Christian religion across the continent.

In his book The Bitter Waters of Medicine Creek: A Tragic Clash Between White and Native America, Richard Kluger describes Manifest Destiny this way:

The Indian policies of the developing United States government tended to focus on: (1) making Indians into non-Indians via education and conversion to Christianity; (2) removing Indians from lands valued by non-Indians and resettling them in less desirable areas; and (3) extermination.

During the first part of the nineteenth century there were a number of formal American expeditions to explore Indian country—a country which was very familiar to Indians, but unknown to most Americans. These expeditions and the reports which they generated were often, in part, marketing surveys in which they evaluated the economic potential of newly acquired lands; part boosterism for the expansion of American territory; and part justification for “taming the wilderness.”

In Indiana, the Stockbridge Indians wrote to President James Monroe to remind him of the service of their warriors on behalf of the United States during the Revolutionary War. They wrote that they had sent their warriors

“to join your great chief, Washington, to aid him in driving back into the sea the unnatural monsters who had come up from thence to devour you, and ravage the land which we a long time before granted to your fathers to live on.”

The United States, however, had little interest in helping them.

The United States Congress authorized an annual sum of $10,000 as a “civilizing fund” for Indians. The money was to be used to teach agriculture and to teach the children reading, writing, and arithmetic. The Secretary of War, who was in charge of Indian affairs, asked missionary societies to participate in this endeavor. Historian C.L. Higham, in his book Noble, Wretched, and Redeemable: Protestant Missionaries to the Indians in Canada and the United States, 1820-1900, writes:

“The Civilization Fund is an example of the idea of superior cultures aiding inferior ones, and the attempts of the U.S. government to ‘improve’ on the environment.”

Spain sold Florida to the United States. The United States promised to honor the rights of the Indians. Historian Louise Welsh, in an article in the Chronicles of Oklahoma, noted that the Seminole

“certainly had no reason to welcome the substitution of the United States control for the weak and distant authority of a Spanish sovereign.”

In 1816, the United States had invaded Spanish Florida over concerns regarding escaped slaves and Seminole raids. This marked the beginning of the First Seminole War. The 1819 purchase of Florida from Spain was the result of this war.

In Nebraska, the American Scientific Expedition headed by Major Stephen Long, an officer in the army’s Topographic Bureau, established its base camp at Council Bluffs. From this camp, members of the expedition made short trips to gather ethnographic and natural history materials. Historian James Ronda, in his chapter in North American Exploration. Volume 3: A Continent Comprehended, reports:

“The harvest of Indian information was especially valuable, as were the drawings and sketches made by the two artists.”

The British government instigated a land exploration effort under the leadership of John Franklin to explore the Arctic coast. Franklin met with Sir Alexander Mackenzie, the first European to cross North America by land, who offered him advice regarding the need for Native guides:

“…it will I think be absolutely necessary to find some of the Natives, say the Esquimaux, make your Peace with them & persuade some of them to accompany you along the coast until they give you over to some of the friends to the East.”

In New Mexico, a party of Aa from the Yellowstone River area visited the Spanish governor to ask for trading relations.

In Idaho, fur trader Donald MacKenzie of the North West Company camped with a composite Shoshone band on the Little Lost River. He held council with the Northern Shoshone and the Bannock to allow his fur-trapping enterprise to enter their territory. Peiem, the leader of the Boise Shoshone, and other leaders agreed to allow his enterprise to continue.

The Iowa moved from the Des Moines River to an area along the Chariton River in Missouri. This pro-American band joined the Otoe and Missouria.

In Ohio, the Indian agent asked the Shawnee about their history. He was told that they originally came from West Florida. Shawnee elder, Black Hoof, who was about 80 years old, recalled bathing in the salt water of the sea when he was a boy.

A band of Winnebago under the leadership of Shickshack moved south and established a village along the Sangamon River in Illinois.

Charles Lennox, duke of Richmond, was appointed governor general of Canada. The Shawnee prophet Tenskwatawa met with him and complained loudly about the mistreatment of Indians loyal to the Crown. The governor soon became bored with the tirade, ended the audience, and instructed Tenskwatawa to put the complaints in writing. Tenskwatawa sent a long list of grievances to the capital, but Lennox had died, and the new governor general ignored the petition.

In Ontario, the British Indian Department declared Nebenagoching, the eight-year old son of the Crane chief Waubejechauk, as the head chief of the Ojibwa in the rapids area. The British, like other Europeans, assumed incorrectly that leadership among Indian nations was hereditary.

In Manitoba, measles struck the Indian people in the Red River and Lake Winipeg area. In some instances, whooping cough accompanied the spread of measles. Among the Assiniboine in the lower Qu’Appelle and Souris River areas the death toll reached 50%.

In New Mexico, Navajo collaborator Joaquín warned the Spanish of an impending attack which enabled the Spanish to embark on a preemptive campaign against the Navajo. As a result, the Spanish named Joaquín the head chief of the Navajo.

In Iowa, Iowa hunters returned to their village on the Des Moines River after a successful winter hunt. In the village there were ceremonies, dances, games, and horse racing. A war party of Sauk under the leadership of Black Hawk and Pashepaho silently surrounded the village and attacked. Only a handful of Iowa survived, and these were adopted by the Sauk.