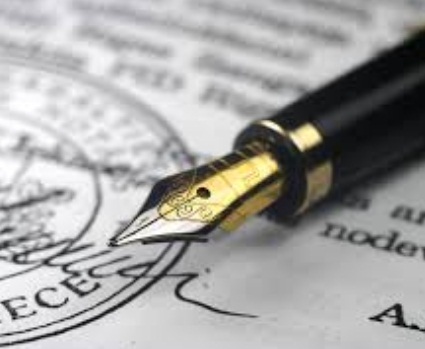 A treaty is simply an agreement between two or more sovereign nations. When the European nations began their invasion of the Americas, they generally viewed Indian nations as sovereign entities and negotiated treaties with them.

The concept of making treaties was not new to American Indian nations and Antone Minthorn, in an essay in As Days Go By: Our History, Our Land, and Our People—The Cayuse, Umatilla, and Walla Walla, writes:

“For thousands of years, Indian people had made oral agreements with each other, sealing their compacts with wampum belts, prayers sanctified by tobacco, and gift-giving.”

Following the Constitution, the United States recognized Indian nations as sovereign entities and thus negotiated treaties with them. From the viewpoint of American law, there are three basic steps involved in the treaty process: (1) the treaty is negotiated, (2) it is then ratified by the Senate, and (3) it is proclaimed (signed) by the President. At this time, the treaty is considered to be in force and is a law which is superior to that of local or state laws.

When it came to the process of negotiating the treaties, the United States made little effort to understand the nature of Indian government nor to understand that Indian nations were not culturally identical.

American negotiators preferred to deal with as few Indian nations as possible. They failed to recognize band and tribal autonomy and simply created fictional tribes with whom they could negotiate. They often assumed that if a people spoke the same language, or languages that were closely related, that they could be considered to be a single tribe. The American negotiators, ignorant of Indian cultures, simply grouped autonomous bands together as if they were a single tribe. Then the negotiators appointed supreme chiefs to rule over tribes which had never before been a single governmental entity.

During the first part of the nineteenth century, the American policy was to remove Indians from east of the Mississippi River and to “give” them reservations in Indian Territory. This was a policy with deep roots in greed—a desire to obtain the land which the Indians had farmed for centuries—and in blatant racism. In their book The Cherokee Nation and the Trail of Tears, Theda Perdue and Michael Green write:

“In one sense, removal was a continuation of the policies created by Europeans when they first came to America, took a piece of land, and pushed the Indians off it so they could use it for themselves.”

Briefly described below are some of the 1819 treaties and councils involving Indian nations and the United States and other European nations.

A Cherokee delegation which included John Ross, John Walker, and Charles Hicks traveled to Washington, D.C. to persuade the United States to rescind the 1817 treaty. After meeting with the delegation, Secretary of War John C. Calhoun realized that General Andrew Jackson had lied to him about the treaty. Calhoun, who harbored political ambitions, cannot simply rescind the old treaty, but instead negotiated a new treaty which ceded 6,000 square miles of Cherokee land. The Cherokee were given promises of protection against American settlers, of money to finance schools, and of technical assistance. The government promised that the Cherokees who wished to remain in the ceded area would be able to apply for 640-acre reservations and become citizens of the United States.

“Your great object ought to be to hold your land separate among yourselves, as your white neighbors, and to live and bring up you children in the same way they do, and gradually adopt their laws and manners. It is thus that you can be prosperous and happy. Without this you will find you have to emigrate, or become extinct as a people.”

In North Carolina, 49 Cherokee heads of families registered with the federal government and had their private reservations surveyed. Those applying for private reservations included Yonaguska and Euchella. However, some non-Indians were so eager to acquire the ceded lands that state officials sold to non-Indians some of the reservations which the federal government had guaranteed to the Cherokee. According to historian John Finger, in his book The Eastern Band of Cherokees 1819-1900:

“There was no malice in this, simply a traditional Anglo-American desire to acquire new lands.”

In Illinois, treaties were negotiated with the two Kickapoo bands. In his book The Kickapoos: Lords of the Middle Border, A.M. Gibson reports:

“After months of lengthy councils, during which tons of government provisions were used to feed the tribe and headmen, the commissioners won their treaties.”

The Treaty of Fort Harrison and the Treaty of Edwardsville promised the Kickapoo and their heirs a reservation forever in Missouri in exchange for their lands in Illinois. The Senate, however, rejected the treaties.

In Illinois, soon after signing their treaties with the United States, the Kickapoo began the process of moving to southwestern Missouri. A.M. Gibson reports:

“The removal of the Kickapoos from Illinois and Indiana to the Osage River was a part of a broad national policy to evacuate a number of tribes to the area beyond the trans-Mississippi settlement.”

When the Kickapoo arrived at their new lands in Missouri, they found that the government had already surveyed a site for their reservation. They had been promised that they could choose their own land. The Kickapoo leaders charged that the American treaty negotiators had cheated them out of their Illinois lands.

In Illinois, two Kickapoo bands, both with about 250 warriors, refused to consider removal. One band, under the leadership of Mecina, refused to accept the fact that the Kickapoo land had been ceded to the United States.

In New Mexico, a treaty between the Spanish and the Navajo specified the return of all captives, an indication that there was substantial slave raiding from both groups. The Spanish promised outright ownership of the land which the Navajo had been using on an informal basis. In addition, the Spanish prohibited the grazing of Spanish cattle near Navajo fields.

In Nebraska, the American negotiators met in council with the Omaha and recognized Big Elk and Big Eyes as chiefs. Presents were given to the chiefs to distribute to their people. Archaeologists John O’Shea and John Ludwickson, in their book Archaeology and Ethnohistory of the Omaha Indians: The Big Village Site, report:

“the Omaha political leadership sought ratification of their authority from American officials – a prudent gesture if the chiefs were to be dealt with credibly.”

In Nebraska, the Indian Agent summoned a number of tribes to Lisa’s Fort to counsel. The Otoe and the Iowa were the first to arrive. Shongatonga (The Great Horse) spoke for the Otoe and asked for permission to perform a dance and ceremony. After the dance, whiskey was served to the participants.

The council was attended by 100 Otoe, 70 Missouria, and 60 Iowa. The talks focused on peace and friendship. Blankets, guns, tobacco, kettles, and ammunition were presented to those in attendance.

At a council with the Otoe-Missouria, the Americans recognized only the Otoe as chiefs of the nation. According to explorer Stephen Long who attended the council with Indian Agent Benjamin O’Fallon:

“No chief was acknowledged among the Missourias as it is the wish of Major O’Fallon to extinguish as much as possible national prejudices between the two nations or tribes.”

It was also cheaper to deal with only one nation than with two.

In Missouri, the Americans met in council with the Iowa. While Hard Heart was the designated speaker for the tribe, White Cloud insisted on speaking. Agent Benjamin O’Fallon told him that he had not come to listen to boys. White Cloud expressed the frustration felt by many: that they cannot cope with the American soldiers and their guns and thus they will make peace. White Cloud and his followers then left the council.

In Mississippi, bowing to Congressional pressure, a new attempt to persuade the Choctaw to remove to the west was undertaken by the Secretary of War. Andrew Jackson headed the government negotiators. Jackson, based on a letter from Peter Pitchlynn, believed that half of the Choctaw actually favored removal. Once the Choctaw were assembled, Jackson told them that if they did not move west soon, Arkansas Territory would fill up with non-Indian settlers. For three days, Jackson lectured the Choctaw, threatened them, and cajoled. Choctaw leader Pushmataha bluntly replied:

“We wish to remain here…and do not wish to be transplanted into another soil.”

He also pointed out that the land west of the Mississippi was very poor and that the government was trying to cheat them by asking them to give up good farm lands for poor farm lands. In his book The Removal of the Choctaw Indians, Arthur DeRosier reports:

“Jackson was extremely annoyed by the failure of his commission to negotiate a treaty.”

In New York, the Ogden Land Company, with the approval of the federal government, met with the Seneca to discuss buying their land. To watch out for the best interest of the Indians, the government appointed two agents to make sure that the Indians were not cheated or deceived. The Seneca chiefs—Little Billy, Red Jacket, Tall Chief, Young King, Two Skies, Infant, and Destroy Town—listened to the offer which was expressed in glowing terms about its benefit to the Seneca. One of the agents appointed by the government, told the Seneca that the President James Monroe felt that it was in their best interest to sell their lands. The Seneca gave in and sold their land for 55 cents an acre and the land company quickly resold it for many times that amount. In his book Red Jacket: Seneca Chief, Arthur Caswell Parker writes:

“Federal commissioners, delegated to prevent ‘cheating of the Indians,’ entirely forgot that they might have insisted upon a much higher compensation at a public sale, the profits of which could have been used to benefit these Indians for many years.”