The Columbia Plateau refers to the area between the Cascade Mountains and the Rocky Mountains in Washington, Oregon, Idaho, British Columbia, and Western Montana. The Sanpoil are an Interior Salish-speaking tribe whose homeland was on the north bank of the Columbia River from its confluence with the Spokane River to the Sanpoil Valley.

Among the Salish-speaking tribes of the upper Columbia River it was necessary to have a guardian spirit to obtain any success in life. Consequently, both boys and girls at about the age of puberty were sent out to spend some time alone so that a guardian spirit would reveal itself to them. Among many of the tribes a young person was not considered to be an adult until the help of guardian spirits had been obtained. In his book When the River Ran Wild! Indian Traditions on the Mid-Columbia and the Warm Springs Reservation, George Aguilar reports:

In the Handbook of North American Indians, Loran Olsen describes the vision quest this way:

“To seek a person helper the Plateau boy or girl would, following extensive preparation by elders, set out to a distant isolated spot for several days or nights. The youngster would not eat during his sojourn, but would remain ready spiritually for the visit of a supernatural being who would communicate with him and give him a personal song.”

In the Winter Spirit Dance the participants celebrate their guardian spirits in song, dance, and costume. It was at this time when the song given by the spirits during the vision quest would be sung. The emergence of this personal song at this time was encouraged by the spiritual leaders. Loren Olsen reports:

“This song, guarded carefully by each individual who owned one, might be used thereafter to summon tutelary power in times of need.”

Many of the Indian nations in this region, such as the Sanpoil, speak languages which belong to the Salish language family. For many of the Salish-speaking tribes, prophecy was an important part of their spirituality. Prophecy is a traditional way of knowing the future and was used to predict such events as salmon runs and war party success.

With regard to prophets among the Plateau tribes, historian Larry Cebula, in his book Plateau Indians and the Quest for Spiritual Power, 1700-1850, reports:

“Prophets were usually men and women who had ‘died’ and come back to life.”

Larry Cebula goes on to say:

“After returning from death, the prophet would announce that he or she had received a vision or had journeyed to the land of the dead.”

Anthropologist Lillian Ackerman, in her book A Necessary Balance: Gender and Power Among Indians of the Columbia Plateau, writes:

“Native prophets were influential figures in the indigenous religion. They received visions that instructed them to preach to the community to uphold standards of morality. The prophets were expected to reform people through the Prophet Dances.” 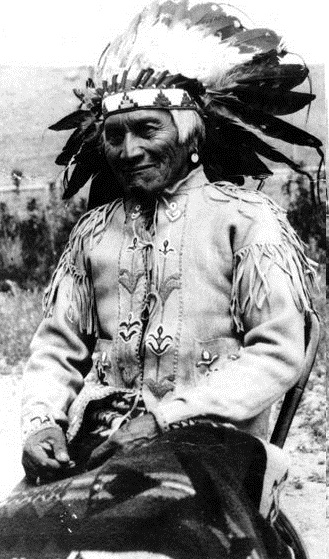 Like other Sanpoil youth during the last half of the nineteenth century, Skolaskin obtained a guardian spirit. It was not a particularly powerful one, but he proved to be a likeable young man. When he was about 20 years old, Skolaskin became very ill. He developed sores and his legs became flexed. Soon he was unable to straighten them out. He tried herbal remedies, but they failed to work. Medicine people tried to cure him, but they also failed.

After two years of living in pain, Skolaskin went into a coma and people thought that he had died. He lay motionless for one to three days (the accounts of this vary). As they were preparing his body for burial, Skolaskin came back to life. He began to sing a song which no one had ever heard. He announced that his pain was gone and that he had received a great revelation while dead.

While Skolaskin regained the ability to walk, his knees remained permanently flexed. This meant that he had to walk in a stooped position with a hand on each knee. In spite of this deformity, Skolaskin became the chief of the Sanpoils. In their book Half-Sun on the Columbia: A Biography of Chief Moses, Robert Ruby and John Brown describe Skolaskin this way:

“…a hunchback with body so twisted he could not stand or walk without support, maintained his control over them by prophetic trances and visions.”

At the time he began preaching, Skolaskin was living among the Spokan as his own parents were dead. He began preaching to the Spokan that people should not drink alcohol, steal, or commit adultery. People were to pray to the god—called Sweatlodge—each day when they arose and before eating. Every seventh day was to be devoted to praying and singing. On this day there was to be no work, no dancing, and no gambling. People were to be kind and friendly to everyone. His teachings combined some traditional native concepts and practices with some which were borrowed from Christianity.

With regard to the traditional mythology of the Middle Columbia River Salishans, Jay Miller, in a chapter in the Handbook of North American Indians, reports:

“On Naming Day, at the end of Spirit Age, just prior to human arrival, the spirit leader, who created the world before becoming Sweatlodge, gave names to all creatures at a dawn assembly.”

Anthropologist Paula Pryce, in her book ‘Keeping the Lakes’ Way’: Reburial and the Re-Creation of a Moral World among an Invisible People, reports:

“Kolaskin appears to combine shamanistic ideas of death, resurrection, and prophecy and winter ceremonial practices along with Christian rituals such as Sunday prayer meetings and an avoidance of work, dancing, or gambling during the Sabbath.”

“Meetings were held once or twice on Sunday during which Kolaskin taught prayers and songs addressed to the deity Sweat Lodge.”

His teachings were opposed by the government, Catholic missionaries, the Sinkiuse chief Moses, and the Nez Perce Chief Joseph. Robert Ruby and John Brown, in their biography of Skolaskin in the Encyclopedia of North American Indians, report:

“Although he was anathema to the Roman Catholic Church, which considered him a devilish pagan, Skolaskin used song, prayer, hand bells, and other symbols of Catholic worship in his church house.”

At the time when Skolaskin was preaching his new message, the Indian peoples of Washington were undergoing great change. In 1872, the Colville Reservation was established by executive order of President Ulysses S. Grant for the Methow, Okanagan, Sanpoil, Nespelem, Lakes, Colville, Kalispel, Spokan, Coeur d’Alene, Chelan, Entiat, and Southern Okanagan tribes.

Skolaskin made only a few converts among the Spokan before returning to the Sanpoil. He took up residence at the village of Whitestone and he was hailed by the Sanpoil as a great prophet. Nearly all of the Sanpoil converted to the new religious movement.

In 1873, Skolaskin predicted that a major disaster was going to occur. Then, on November 22, 1873, a major earthquake shook the region with tremors and aftershocks lasting until spring. With this successful prediction, his reputation was enhanced. He gained many followers among the Spokan and Southern Okanogan. Even many of the Protestant Christian Spokan began to follow this new path.

At Whitestone, Skolaskin built a structure in which he could hold his meetings. On Sundays, there would be one or two meetings during which he would teach prayers and songs addressed to Sweatlodge. He would tell of his revelation while dead and of his miraculous cure.

At Whitestone, Skolaskin received a second revelation. He saw the coming of a great flood which was to arrive in ten years. To avoid destruction by this flood, he had a sawmill built near the church to produce lumber for making a boat. Those who would board the boat—both humans and animals—would be saved. Although the lumber was cut for the boat, the boat itself was never actually built. Robert Ruby and John Brown, in their biography of Skolaskin in the Encyclopedia of North American Indians, report:

“The ark was never built, but he used the plan to build it as a ruse to lure women. After commanding their husbands to gather logs for the ark at distant places, he could pursue these women without fear of reprisal.”

According to Paula Pryce:

“Dictating the methods he had discovered about leading a righteous and moral life, he became a powerful leader. But Kolaskin turned tyrannical, exploiting his followers’ labour and wealth and using force against them when they did not obey his directives.”

For those who failed to live up to his expectations, Skolaskin had a jail built. The jail was essentially a pit which was covered with boards. Skolaskin then appointed policemen who acted as judges to determine who should be imprisoned. People were jailed for minor offenses and forced to live on a starvation diet while in jail. There were rumors among the other tribes on the Colville Reservation, that Skolaskin lived with some of the wives of the men he had imprisoned. This created some ill-will toward Kolaskin.

Finally, in 1889, two of Skolaskin’s prisoners escaped and his police went in search of them. One of the prisoners was found, and when the police attempted to tie him up to take him back, the prisoner’s uncle came to his aid. He shouted that Skolaskin was always making trouble. Skolaskin had the uncle tied up and taken to the jail. Another nephew entered the fray, and Skolaskin’s policeman shot him dead.

The dead man’s family took the body to Whitestone for burial. They then stormed the jail and released the uncle and the nephew. They attempted to burn the jail but could not get the fire going.

While the policeman—the man who actually did the killing—was released, Skolaskin was sent to the Alcatraz Island prison for three years. There was, of course, no trial. In their book Half-Sun on the Columbia: A Biography of Chief Moses, Robert Ruby and John Brown write:

“Six days before Skolaskin was hustled off to Alcatraz, a blizzard began blowing its Arctic breath down the reservation and across the Big Bend. Never had the natives felt such a cold wind. Was this the wind the Prophet had promised to send?”

Upon his return to the Sanpoil, Skolaskin tried to disband his religious organization. He told the people that his teachings were wrong, but many continued to follow the new path. However, Skolaskin continued to function as the chief of Whitestone. One of the conditions of this release from Alcatraz was that he agree not to interfere with the American administration of the Colville Reservation. When he discovered that the north half of the reservation had been sold while he was gone, he rescinded this pledge in anger and advocated resistance. In 1911, he went to Washington, D.C. to protest the allotment of the Colville Reservation.

He continued to practice as a traditional medicine man. However, in 1918 he converted to Catholicism, took the name Frank Skolaskin, and cut his hair.

Skolaskin died in 1922 and his religion continued to be practiced on the Colville Reservation until 1930.

Indians 101/201 is a series exploring American Indian biographies, histories, cultures, and current concerns. Indians 201 is an expansion of an earlier essay. More biographies from this series: