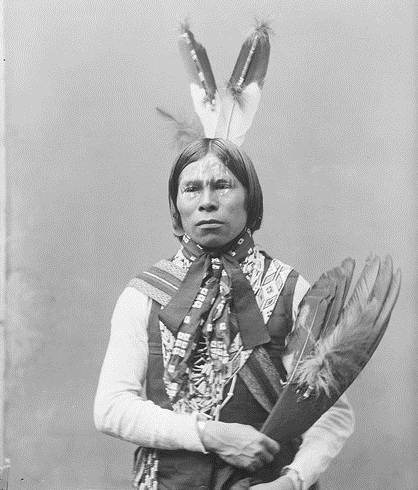 During the 19th and much of the 20th century, the American federal administration of Indian affairs can be characterized by several concerns. First, while the federal government held a fiduciary responsibility for the Indians as negotiated in treaties, the government preferred to ignore any legal responsibility and to administer federal programs to achieve maximum benefit for non-Indians. Second, the actual administration of Indian programs was largely carried out by individuals whose primary concern was motivated by increasing their personal wealth rather than any interest in benefit to the Indians. And third, there was an overwhelming obsession with private property: the idea of Indian people owning property in common and living together in villages was repulsive to the American government. All of these forces can be clearly seen in the case of the Kansas Land Sharks and the Kickapoo. Unfortunately, this is not a unique story, but one that was replicated wherever Indians owned property in common.

From the establishment of the United States as a sovereign nation, its founding fathers, such as Thomas Jefferson, had envisioned a nation without American Indians. Indians were seen as obstacles to progress and development. By the 19th century, the American government was adopting policies of removing Indians from the states and relocating them in “undeveloped” lands to the west.

In 1819, the United States government negotiated treaties with two Kickapoo bands in Illinois. Under the terms of the Treaty of Fort Harrison and the Treaty of Edwardsville, the Kickapoo were to give up their Illinois lands and relocate in Missouri. In Missouri, the Kickapoo and their heirs, the government promised, would be able to choose lands for a reservation that would be theirs forever. Upon arriving in southwestern Missouri, however, the Kickapoo found that the Americans had already selected the land for the reservation. The Kickapoo leaders charged that the American treaty negotiators had cheated them out of their Illinois lands.

The concept of “forever” has always had a different meaning for Americans. By 1826, the American government was once again pressuring the Kickapoo to give up their lands and move. William Clark (of Lewis and Clark fame) met with the Kickapoo in St. Louis and tried to persuade them to give up their reservation for new lands on the Missouri River. Clark promised them that the Americans would break the ground for them, help them build fences and divide their land into individually owned parcels, build permanent houses for them, and provide them with seed, fruit trees, cattle, and chickens.

In 1832, the Kickapoo signed a new treaty which extinguished their title to all land in Missouri and which established a new reservation for them in Kansas.  In 1833, the United States held a council at Fort Leavenworth with the Northern Kickapoo for the purpose of convincing them that the United States was their friend, faithful guardian, and protector. Some of the Kickapoo were still upset over the fact that they had not been allowed to choose their own land in spite of treaty promises.

In 1853, it was apparent that Kansas would become a state. As a state this meant that Indians would be removed and Indian lands would be open for non-Indian settlement. American settlers, assuming that Kickapoo lands would soon be opened for settlement, simply squatted illegally on these lands. They fenced fields and pastures, they built cabins, and they refused the requests of Kickapoo leaders to leave. The Kickapoo appealed to the commandant at Fort Leavenworth for aid. The Americans, however, had little interest in honoring their legal commitments to Indians and simply negotiated a truce which enabled the squatters to remain.

As expected, the United States negotiated new treaties with the Indians in Kansas which extinguished title to most of their land within the state. The Kickapoo ceded 618,000 acres of land and retained just 150,000 acres. For this they were to receive $300,000, one-third which was to be invested to produce income for a Kickapoo educational fund. The remainder was to be paid out over a period of 20 years for the erection of public buildings and houses, and for the purchase of goods such as equipment and seeds. The treaty also permitted a railroad right-of-way across Kickapoo land and authorized the president to issue individual allotments.

The new Indian agent for the Kickapoo was William P. Badger. Acting on the needs of the railroad and townsite speculators, Badger reported to the Commissioner of Indian Affairs that the Kickapoo wanted to have their reservation allotted into individual tracts. In actuality, the Kickapoo had always held land in common (it should be remembered that they had been farming for thousands of years) and that the tribal religion stressed the system of communal land ownership.

The Commissioner of Indian Affairs was, of course, pleased to hear that the Kickapoo were ready for private land ownership. However, he set down three basic rules for allotment: (1) the tribe was to pay the cost of surveying and allotting the land, (2) each family head was to receive 80 acres of land (this was an arbitrary figure and not based on any actual assessment of how much land each family would actually need to support themselves), and (3) the remaining land was to be held for the Southern Kickapoo. At this time there were a number of Kickapoo bands in Indian Territory and in Mexico.

The Kickapoo were not happy with Badger’s administration of their reservation. They charged that he had neglected their interests and had acted in the interests of the railroad. William Badger was removed from office: it was not for failure to do his job, but rather the Republican party won the national elections. The position of Indian agent was a political job and with a new party in power, Badger lost his job.

If any Kickapoo Indians had thought that a new Indian agent would serve them better, they were soon disappointed. The new agent was Charles B. Keith who was not only Badger’s brother-in-law, but also one of his business partners. Keith and Badger kept the only store permitted on the reservation, sold goods to the Kickapoo at exorbitant prices, and retained tribal annuities to satisfy credit extended to Indians. Like Badger, Keith was also an advocate of the railroad and of allotment.

The Atchison and Pike’s Peak Railroad had been formed in 1859 with Senator Pomeroy as its president. The railroad not only wanted a right-of-way across the Kickapoo Reservation, it also intended to gain title to all Kickapoo surplus lands when the reservation was allotted. Senator Pomeroy met with the Secretary of the Interior (the person in charge of Indian affairs) in 1862 and as a result of this meeting the Secretary declared that the Kickapoo were ready for allotment. The already prepared allotment agreement was then sent to Indian Agent Keith for Kickapoo ratification.

Under the terms of the allotment agreement, all surplus lands, an estimated 125,000 acres, were to be sold to the Atchison and Pike’s Peak Railroad for $1.25 per acre. While the politicians and the general public were well aware of the fraud which had been perpetuated against the Kickapoo, the Kickapoo were angered when they found that they had once again been duped by the United States. This time, however, W. W. Guthrie, the attorney general of Kansas, came to their aid.

As it is today, it was highly unusual for any state attorney general to come to the aid of an Indian tribe. Guthrie, however, was not really motivated by the idea of justice for the Indians, but rather he was a part of a group of rival investors who were backing the Hannibal and St. Joseph Railroad Corporation. While he called attention to the great fraud against the Kickapoo, his real concern was in the advantage which allotment had given to the Atchison and Pike’s Peak Railway.

Guthrie called for an investigation which opened with a grand jury hearing during which many Kickapoo leaders voiced their opposition to the agreement and lodged charges of fraud against Agent Keith. Guthrie maintained a campaign to call the matter to the attention of the Commissioner of Indian Affairs, the Secretary of the Interior, the President of the Senate, and the Speaker of the House of Representatives. Among the facts which Guthrie brought out was that no Kickapoo council had been held to ratify allotment, even though the Agent claimed that it had. In the face of this opposition, the allotment agreement was suspended.

Facing charges of collusion in this matter, the Commissioner of Indian Affairs resigned and the new Commissioner of Indian Affairs conducted a series of hearings into the matter. The hearings revealed that: (1) Keith had threatened military action against the Kickapoo if they failed to sign the allotment agreement; (2) Keith had threatened to withhold the tribe’s annuities if they failed to sign the allotment agreement; (3) when the chiefs resisted coercion, Keith had simply replaced those who opposed the agreement; and (4) only one recognized chief had actually signed the agreement.

Senator Pomeroy then intervened in the matter and because of the allegations that Guthrie actually worked for the Hannibal and St. Joseph Railroad Company, the suspension on the allotment agreement was lifted, allotment proceeded, and by 1865 the Atchison and Pike’s Peak Railroad was selling Kickapoo land to non-Indian settlers. In addition, an agreement between the government and the railroad allowed the company to delay payment for the Kickapoo lands until 1871.

From the viewpoint of the Kickapoo, allotment was sacrilegious and broke the covenent that they had had with the Great Spirit since the time of first creation.

One final note: while the government had ignored all Kickapoo complaints about non-Indians harvesting timber from Kickapoo lands, as soon as it was apparent that these lands were going to be transferred to the ownership of the railroad, the government began to zealously guard and protect the rights of the railroad to that timber.