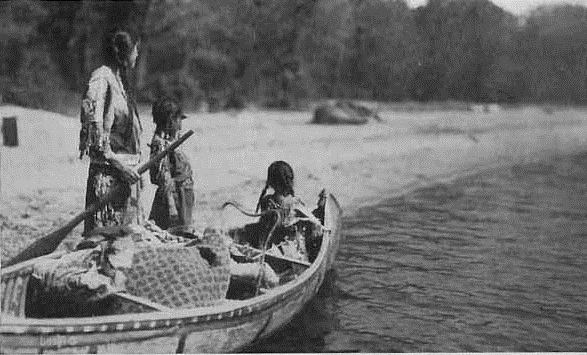 It is a long held maxim that American Indians should not be allowed to acquire wealth. Since one of the ways of acquiring wealth is through minerals-such as copper, iron, silver, and gold-when then minerals were discovered on Indian lands, these lands, and the mineral rights, had to be taken from the Indians so that they could be developed by non-Indian interests. One example of this can be seen in the Great Lakes region and the fight to remove that Ojibwa from Minnesota, Michigan, and Wisconsin.

By 1850 it had become evident to non-Indians that there might be a great deal of wealth on Ojibwa lands in the form of copper and timber. In order for non-Indians to exploit these resources, it was first necessary to get rid of the Ojibwa who were seen as barriers to civilization and development. In response to pressure by non-Indian mining and timber interests, President Zachary Taylor ordered the removal of the Ojibwa (also called Chippewa) from Minnesota, Wisconsin, and Michigan. He offered four reasons for the removal and requested prompt action in carrying it out:

Removal would provide the Indians with opportunities for promoting their civilization and prosperity.

The Ojibwa were shocked by the removal order and messengers were sent to all of the villages by the chiefs to determine if there had been any depredations committed against American settlers. When they failed to find any incident which would have triggered the President’s action, the chiefs convened councils throughout the territory to discuss the situation.

The Ojibwa did gain some allies in their fight against removal. In 1851, an editorial in the Lake Superior News and Mining Journal opposed the proposed removal:

“We believe we express the conviction of the entire population of the Lake Superior county in regarding this removal as uncalled for by the best interests of the Government, the whites, or the Indians.”

The editorial goes on to say:

“From time immemorial this people have occupied the northern region, and have become acclimated to its cold and rigorous climate; and by hunting and fishing, and the cultivation of their small patches of soil, they have lived comfortably and contentedly, causing little or no trouble to the United States and their neighbors.”

In 1852, Chippewa chief Buffalo, who was in his early nineties, together with several other chiefs and an interpreter traveled to Washington, D.C. without government authorization. They brought with them a petition supporting the Chippewa cause against removal. When the delegation reached Washington, D.C., the Commissioner of Indian Affairs and the Secretary of the Interior ordered them to return home immediately as they did not have permission to make the trip. However, a chance encounter with a Congressman from New York resulted in a meeting with President Millard Fillmore. Prior to his meeting with the President, Buffalo dictated a document that reviewed all of the outstanding grievances against the United States.

After meeting with the Chippewa delegation, President Fillmore rescinded the removal order and agreed to cease all efforts to remove them. A grand council of all Chippewa bands was held when Buffalo and the other chiefs returned. A message from the President was read to the people. While the people retained the right to remain in their homelands, the wealth of these homelands was developed by others.