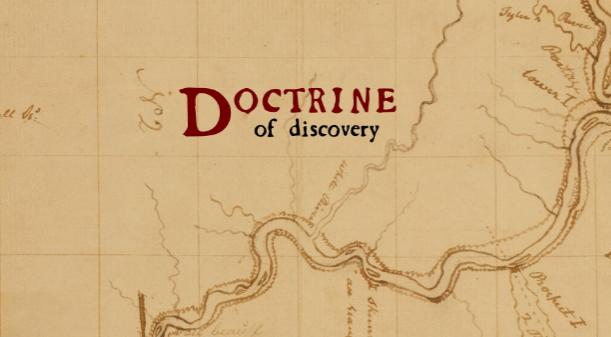 European nations assumed that they had a right to govern the Indian nations they encountered. This right stemmed from the legal and religious Doctrine of Discovery which declares that Christian nations have a right, if not an obligation, to govern all non-Christian nations. Once an Indian nation had been read the Christian history of the world, even though it might be read to them in a language they did not understand, then they were obligated to be ruled by the superior Christian nation.

The Catholic Pope in 1452 laid the foundation for the Doctrine of Discovery by issuing the papal bull dum diversas which instructed the Portuguese monarchy:

In 1513, the Doctrine of Discovery was formalized by the Spanish in a document called the “Requirement”. The “requirement” or “requerimento” was drawn up by Palacios Rubios, Spain’s master jurist, and provided the legal basis for the Spanish conquest of the Americas. All Spanish expeditions were required to carry a copy of the document. In the document, King Ferdinand told Native Americans that God had declared that the Pope rules all people, regardless of their law, sect, or belief. This included Christians, Moors, Jews, Gentiles, or any other sect. He asked that the Native Americans come forward of their own free will to convert to Catholicism or

Furthermore, the Natives who resist are to be held guilty of all resulting deaths and injuries.

Upon contacting an Indian village, the Spanish conquistadores would read the ‘Requirement’ which recited the history of the world as they knew it, from the Garden of Eden to the recent discovery. It did not make any difference that the natives might not understand Spanish or Latin, or that they might have their own history of the world. Once the word of the Spanish god was revealed, a just war could be waged on those who rejected it.

The idea of a “just war” was based upon the word of Saint Augustine. Under this concept, a just war was one that was waged to right an injustice or wrong by another nation. One of these wrongs, according to the Christian view, was not being Christian. Thus, if an Indian nation were to fail to let missionaries live and preach among them, then they were committing a “wrong” which would have to be set right through a “just war.”

The Doctrine of Discovery entered into American jurisprudence in 1823 when the Supreme Court ruled on Johnson and Graham’s Lessee versus McIntosh. The Court found that the Doctrine of Discovery gave sovereignty of Indian lands to England and then to the United States. Indian nations, under this Doctrine, have a right of occupancy to the land. Christian nations, such as England and the United States, have superior rights over the inferior culture and inferior religion of the Indians. According to the Court, Indians have been compensated for their lands by having the gift of Christianity bestowed upon them.

In 2005, the Supreme Court once again cited the Discovery Doctrine in City of Sherrill v Oneida Indian Nation of New York.