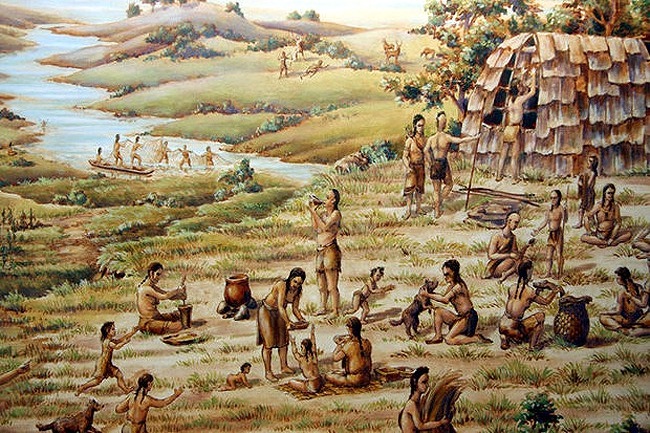 For the American Indian nations east of the Mississippi River, the Revolutionary War was a time of great turmoil, deceit, and disaster. Both the British and the American rebels sought assistance from and alliance with the Indian nations. While both armies sought Indian warriors, both armies also attacked Indian villages, including those which were trying to stay neutral in the conflict. The war divided many Indian nations, with some Indians favoring one side, some favoring the other, and many expressing the idea that this was not their war. One of the Indian nations impacted by the Revolution was the Lenni Lenape (also known as the Delaware) whose traditional territory included New Jersey, New York (west of the Hudson River and the western end of Long Island), eastern Pennsylvania, northern Delaware, and northeastern Maryland.

In 1778, the newly formed United States negotiated its very first Indian treaty with the Lenni Lenape. The treaty allowed American troops to pass through Lenni Lenape territory. In addition, the Lenni Lenape agreed to sell corn, meat, horses and other supplies to the United States and to allow their men to enlist in the U.S. army. The treaty also stated that if the Lenni Lenape might decide at some time in the future, they could form their own state and have a representative in Congress. The idea of statehood for the Delaware appears to have been suggested by Chief White Eyes.

We are not really sure how much of the treaty the Indians really understood. Non-Indians who were present at the negotiations have suggested that the work of the interpreters was somewhat deficient and perhaps deliberately deceptive. George Morgan, who was considered to be the Pennsylvanian most experienced in Indian affairs, did not participate in the conference and later wrote:

“There never was a Conference with the Indians so improperly or villainously conducted.”

The issue of the Revolutionary War divided the Lenni Lenape.  White Eyes and John Kilbuck of the Turtle clan displayed continued pro-American sympathies. One the other hand, Captain Pipe of the Wolf clan moved with many of his followers to the Sandusky River in northwestern Ohio, closer to the Wyandots and the British.

In Ohio, American troops, starving and nearly naked, arrived at a Lenni Lenape village. The American commander delivered a pompous oration in which he told them of his great power and his intent to punish any Indians who failed to follow his orders. Traditionally, the Indians would have politely and quietly listened to their guest, but in this instance, the warriors openly laughed at him.

“He was a Christian in his heart, but did not live to make a public profession of our religion, though it is well known that he persuaded many Indians to embrace it.”

Many of his contemporaries, and some of today’s historians, have suggested that White Eyes did not actually die of smallpox, but was murdered by an American militia group and then secretly buried.

Next, the British decided that the Morovian missionaries and their Christian Lenni Lenape at Gnadenhutten, Ohio were providing food and information to the American revolutionaries. The Delaware were stripped of their possessions and herded into a concentration camp on the Sandusky River. The missionaries were taken to Detroit for interrogation. After spending the winter in the concentration camp, the starving Delaware were released so that they could plant their spring crops.

After their release from the British concentration camp in 1782, 96 peaceful Christian Lenni Lenape were massacred by American soldiers in retaliation for raids carried out by other Indians. The unarmed Lenni Lenape knelt in prayer as they were executed. One of the American rangers used a cooper’s mallet to brain many of the kneeling Indians.  Many historians would later call this massacre a sadistic atrocity. The militia obtained at least 80 horseback loads of plunder and the horses themselves.

The day following the massacre at Gnadenhutten, a war party of 140 Shawnee arrived at the scene and manage to kill or capture most of the American soldiers. The American colonel who led the attack was roasted slowly at the stake.

In 1782, the Lenni Lenape living on Smokey Island (also called Killbuck Island) near Pittsburgh were attacked by Americans. In the confusion of the attack, the wampum belts and bark books containing the tribal archives were lost in the river. This was a major blow to the history and oral traditions of the Lenni Lenape.

The newly formed United States and the British obtained a provisional peace ending the Revolutionary War in 1782.