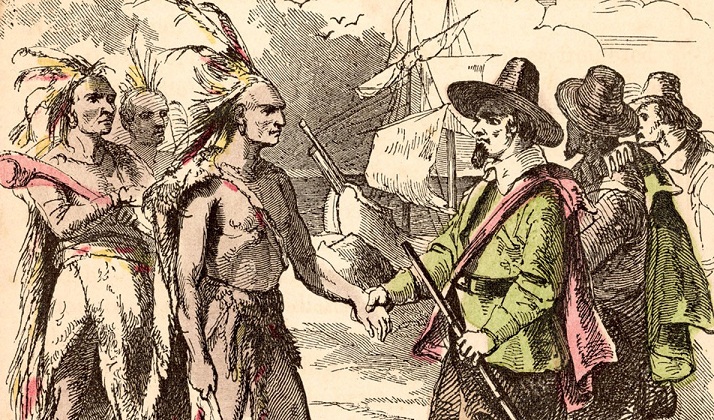 In 1606, guided by the Discovery Doctrine which declared that Christian nations had the right to conquer and rule all non-Christian nations, England gave a Royal Charter to the Virginia Company to develop a market in the New World for English commerce and for

“Propagating of Christian Religion to such people, as yet live in darkness.”

The charter characterized Indians as living

“in Darkness and miserable Ignorance of the true Knowledge and Worship of God.”

The Virginia Company was founded and directed by a group of merchants and gentry who were motivated in part by the promise of strong economic returns for their investment. The company intended to plant trading posts to acquire furs and other valuables from the Indians, and to sell them manufactured goods and textiles. In addition, the Company intended to search for gold and silver, and begin the development of industries, such as the production of naval stores and the manufacture of shingles. Following the royal charter, they sought the conversion of the heathen (that is, converting Indians to Protestant Christianity), the expansion of the English kingdom, increased revenues for the king, employment for the English vagrant poor, and a market for English manufactured goods.

The Plymouth Company, a branch of the Virginia Company of England, was granted the northern coast from New York to Maine. The primary participants in the Plymouth Company were powerful people who had the political and economic means to put a large region of North America under their personal control.

The purpose of the Sagadohoc colony was to find precious metals and spices, establish a fur trade with the Native Americans, and show that New World forests were a limitless resource for English shipbuilders.

While sailing to Maine, the English had encountered two sailing shallops being used by Souriquois under the leadership of Membertou. The Souriquois offered skins for trade and the English noted that the Indians seem to be using a lot of French words. The use of French words told the English that the Indians were in contact with the French. Concerned about the possibility of a French attack, the colonists built an earthenwork fort, which they called Fort St. George. The fort was fortified with eight cannons.

In one instance, five Abenaki, including Skidwarres and the leader Nahaneda, showed up at the fort. They joined the colonists for both food and church services. The Indians were accustomed to hospitality when they visited other villages, but they found that the English forced them to endure public prayers both morning and evening. They told the English that they thought that King James was a good king and that his God was a good God, but that Tanto (their own deity) had commanded them to avoid contact with the English.

While one of the goals of the English colony was to establish trade with the Indians, the English, lacking any understanding of Indian cultures and arrogantly assuming the superiority of their own culture, managed to anger their Abenaki neighbors. As a result trade between the two groups was suspended. There were a number of minor skirmishes in which 11 colonists were killed.

In spite of the tense relationships, the English did manage to obtain some English furs and they gathered sarsaparilla, which the Europeans felt was a valuable herbal cure-all. Tired of waiting for English ships to arrive and resupply them, the English colonists built their own 50-foot ship and were preparing to return on their own when the ships arrived. The English brought with them word that the colony’s leader was now the heir to an immense fortune. With visions of a lavish castle in mind, he decided to return to England and the colony was abandoned.