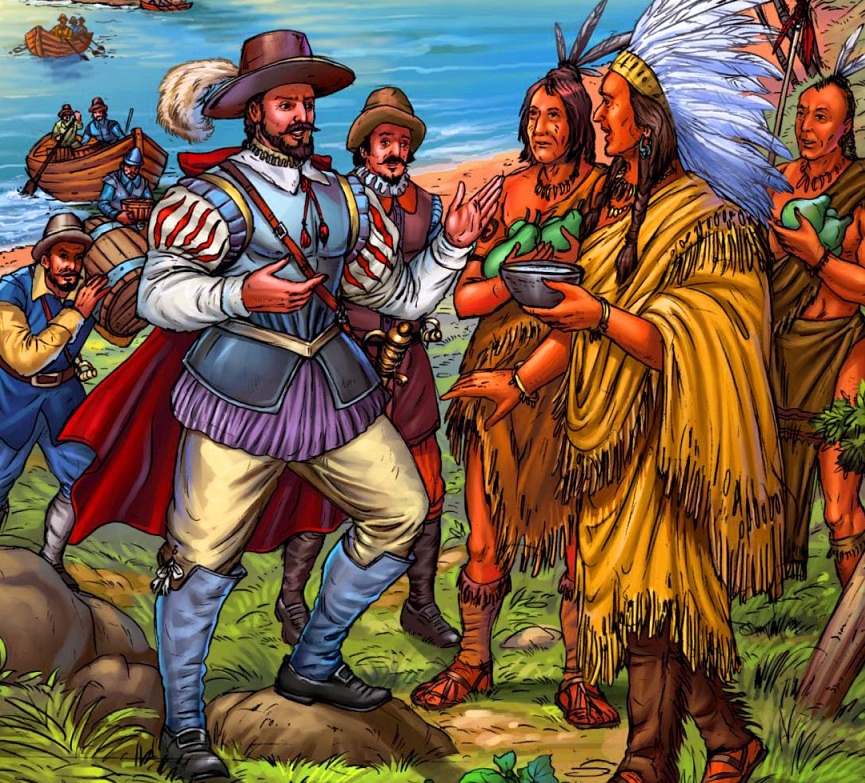 The Spanish invasion of what is now Florida began in 1513. At this time, there were at least 200,000 Native Americans living in the area. Even before the first Spanish explorers set foot in Florida, European diseases had begun to impact the Native population. Smallpox had been carried to the Calusa by Native people from Cuba. The Native people of south Florida were well aware of the Spanish from the reports from the Natives of the Caribbean islands with whom they had regularly traded for centuries.

Spanish explorer Juan Ponce de Leon (the conqueror of Puerto Rico) explored the coast of Florida in 1513. It was Easter Week – Pasqua Florida in Spanish— when he landed and so the land was called Florida. The primary goal of the expedition was to obtain slaves. At this time, the Spanish were interested in Americans as laborers, sexual partners, guides, porters, and suppliers of food. While one of the common misconceptions repeated in history is that Ponce de Leon was looking for a fountain of youth, he was really looking for slaves who would add to his wealth.

The Spanish under Ponce de Leon landed just north of present-day Cape Canaveral which was the northern end of Ais territory. Sailing south of Cape Canaveral they sailed into Biscayne Bay and landed at a Tequesta town.

The Spanish ships then sailed into San Carlos Bay where they intended to clean and recaulk one of the ships. Eighty Calusa canoes filled with archers with shields approached the Spanish ships. The Spanish attacked, drove the Calusa to shore, broke up some of the canoes, and captured some women. The Calusa warriors, however, forced the Spanish to withdraw.

In 1517, three Spanish ships under the command of Hernández de Córdoba stopped for water at San Carlos Bay. The well-armed Spanish landing party was driven off by the Calusa. Six of the Spanish soldiers were wounded and one was carried off alive. However, the Spanish reported that they killed 35 Indians.

In 1519, Spanish sea captain Alonso de Piñada sailed along the Florida coast and then up the Mississippi River for about 20 miles. He reported seeing about 40 towns along the river.

That same year, a series of smallpox episodes began to strike the Native American population with a mortality rate of 50-75%.

In 1521, Juan Ponce de Leon attempted to establish a colony for the Spanish Crown. With a force of 200 men, including Catholic priests, 50 horses, and livestock (cows, sheep, goats), the Spanish landed at San Carlos Bay. They were met by Calusa warriors who inflicted a number of casualties and wounded Ponce de Leon in the thigh with a reed arrow. In the close combat conditions, the European weapons proved less than effective. The Spanish returned to Cuba where Ponce de Leon dies.

The Spanish soldier Pánfilio de Narváez, with a reputation for brutality and a strong desire to find gold and wealth, invaded Florida in 1527 with a force of 600. Narváez had two primary goals: to find gold and to discover a passage to the Pacific Ocean.

The Spanish landed somewhere near present-day Tampa. On a beach empty of any Indians, a monk reads the requerimiento and with this the Spanish feel that they have met the legal and religious obligation to take possession of the land and wage war against the natives. The requerimiento was a recitation of the Christian history of the world followed by the requirement that the Natives come forward of their own free will to convert to Catholicism or

Furthermore, the Natives who resisted were to be held guilty of all resulting deaths and injuries. The requerimiento was read in either Spanish or Latin with little concern for any possible Native comprehension of the words.

Narváez opened up negotiations with the Indians by having one of the chiefs and his family come into the Spanish camp. Spanish hospitality involved cutting off the chief’s nose and having his wife torn apart by dogs.

The Spanish entered a Timucua village which included one dwelling that could hold 300 people. The village was deserted as the Timucua planned to encourage the Spanish to leave by offering no hospitality. However, the Spanish found a gold rattle that ignited their gold-lust.

Next, the Spanish marched north to Tampa Bay. At one village the Franciscan priests ordered that the revered remains of the Timucua ancestors be burned. The Spanish continued their march northward without seeing any natives. The Timucua considered their policy of avoidance to be successful.

Near the Apalachicola River, the Spanish were met by the Timucua chief Dulchanchellin who was carried on a man’s back and was accompanied by a group that included musicians playing reed flutes. The two groups exchanged gifts and the chief led them to his village where he fed them. In the morning, the Spanish find that they are alone.

Farther north, the Spanish carried out an unprovoked surprise attack against the Apalachee village of Apalachen. Even though this was one of the largest Apalachee villages, the Spanish did not find the treasure they were seeking. They found only corn, deerskins, woven cloth, and corn-grinding bowls. There was no gold.

The Spanish continued their march north into Aute country. They found that the Aute had burned and abandoned their village before the Spanish arrival.

The Narváez attempt was a failure. The Spanish found out that their crossbows were no match to the Indian longbows. The Indian bows, 6-7 feet long, were accurate to about 200 yards. Furthermore, the arrows, tipped with flint, bone, snake teeth, and fish scales, penetrated the Spanish armor. Spanish horses proved worthless as war machines in the Florida swamps and brush.