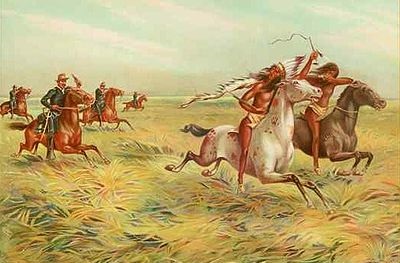 While the army often ignored due process of law when dealing with Indians, there are cases in which the army did attempt to see due process carried out. In 1915, a Mexican sheepherder was murdered in Colorado and popular opinion assumed that he had been killed by an Indian. The court of public opinion blamed Tsenegar (Tse-ne-gat), a Ute Indian, for the death. Subsequently a posse of 26 cowboys crossed into Utah and surrounded the Ute camp of Old Polk. Their supposed goal was to capture Tsenegar who was rumored to be in Old Polk’s group. The cowboys, who were drunk at the time, began firing into the camp with no warning. The Indians had no idea who these men were, nor why they were shooting at them. The posse did not identify itself nor did it ask for Tsenegar. The Indian response was to fire back to distract the cowboys and then to slip away. When the smoked cleared, there were dead on both sides and the Ute had vanished.

In response to this incident, non-Indians began to raise a cry about an “Indian uprising” and to ask for military help. In the meantime, the marshal sent out word that all Indians in the area were to come into Blanding, Utah and surrender. One group of Ute teenagers—Havane, Ute Jack, Noland May, Jack Rabbit Soldier, and Joe Hammans—who had nothing to do with the shootout at Old Polk’s camp–walked into Blanding and gave themselves up. Even though they were innocent of any crime except for being Indian, they were handcuffed and imprisoned under armed guard at the Zion Co-op Store.

Because of the anti-Indian sentiment at this time, the military forcibly removed 160 Ute from their Utah homelands and resettled them on the Ute Mountain Ute Reservation in Colorado.

To capture Tsenegar and Old Polk, the military recruited Bi-joshii, a Navajo medicine man. Bi-joshii made contact with Old Polk and Tsenegar. Through the efforts of trader John Wetherhill and his Navajo wife Slim Woman, the Ute “outlaws” peacefully surrendered to General Hugh Scott. According to General Scott:  “My problem was to prevent those four Indians from being legally murdered. White men had been killed and the trial would be in the hands of white men, possibly prejudiced against the Indian, whose land incidentally was wanted.”  General Scott later wrote:  “I believed that the white man had been the aggressor, but this could be proved only by Indian witnesses whose word would not be taken against that of a white man.”

Tsenegar was tried for murder in Denver, Colorado. Concerned about preserving the image of fairness in this case, the judge appointed leading members of the bar to present Tsenegar’s defense. In court, Tsenegar dressed in a gray flannel suit with a red necktie and a red flower in his buttonhole. He wore moccasins and a white felt cowboy hat. One breast was covered with dime store medals and on the other he wore a miniature United States flag.

The first witness for the government was John Miller, a Ute. As the witness began to be sworn, the defense attorney objected, claiming that the oath was not binding on a non-Christian. The judge overruled the objection. After seven hours of deliberation the jury found Tsenegar not guilty. With regard to the non-Indian response in Utah, Robert McPherson, in an article in the Utah Historical Quarterly, reports:  “Much to the chagrin of the Blanding people, he was acquitted in the courtroom, dined in the best restaurants, and revered as a noble Indian. Infuriated by these developments, the white vowed silently that the next time a serious fight started, there would be a different ending.”

In Utah, a group of Ute encountered a group of cowboys from the KT outfit in Montezuma Canyon. The cowboys had just killed a cow for supper and the Indians, knowing that there would be meat left over, asked for some. The foreman told them:  “Yes, we leave it for the coyotes and the skunks. We think more of them than of you”

The Indians left, and then shot one of the KT cows for supper. Historian Robert McPherson, in article in the Utah Historical Quarterly, reports:  “Most of the men in the cow camp approved of what the Utes had done and believed that the foreman was too scared to say anything to the Indians.”

The Horse and the Plateau Indians