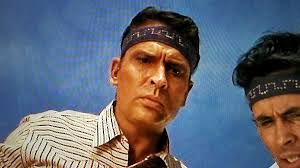 Just fifty years ago—1966—American Indian affairs in the United States was still being guided in part by a philosophy of termination: that is, dissolving American Indian governments and making Indians assimilate into the larger non-Indian culture. American Indians for the most part weren’t cooperating with this termination philosophy and still insisted that they had a right to exist, as Indians, within the United States. Briefly described below are some of the Indian issues and events of 1966.

The Five Civilized Tribes of Oklahoma opened a small museum in Muskogee for the cultural and historical items of the Cherokee, Chickasaw, Choctaw, Muskogee, Creek, and Seminole people who were driven into Oklahoma from the Southeast.

The ballet Kochare based on the Hopi creation myth and written by Quapaw-Cherokee composer Louis Wayne Ballard was performed by the Harkness Ballet Company.

In Arizona, the Peabody Coal Company signed leases with the Hopi and the Navajo allowing them to strip mine 25,000 acres of the Joint Use Area in Arizona. With regard to the Navajo, journalist Marjane Ambler, in her book Breaking the Iron Bonds: Indian Control of Energy Development, reports:

“The Interior Department, under the direction of Stewart Udall, worked with industry and the tribal attorney to convince the council to act immediately, without deliberation.”

“Among other provisions, the Hopi received inadequate payments for the coal and sold their water for the slurry pipeline at the egregiously low rate of $1.67 per acre foot.”

Black Mesa, the area which was to be mined, is considered sacred by traditional Navajo and Hopi people. In pressuring the Navajo tribal council, council members were not informed about the value of their coal or about the potential impacts of the mining.

In Mississippi, the Choctaw constructed the Choctaw Industrial Park in an effort to improve the economic conditions of the tribe.

In New Mexico, the Rough Rock Demonstration School was an experiment in which a group of Navajo parents operated a combined day and boarding school. In her book Language Shift Among the Navajos: Identity Politics and Cultural Continuity, Deborah House describes the Rough Rock community this way:

“a small community where most people still followed the traditional Navajo pastoral lifestyle, shopped at the local trading post, spoke Navajo almost exclusively, and had little formal education and no previous contact with a school in their community.”

While funded by the Bureau of Indian Affairs, the school was the first Indian-controlled school in the United States. According to Smithsonian historian Wilcomb Washburn, in his book Red Man’s Land/White Man’s Law:

“Control of school policy, including the handling of a budget of nearly a million dollars, was placed firmly in the hands of Indians, most of whom were without formal education and some of whom were illiterate.”

The school taught English as a second language rather than requiring students to know English in order to learn. Non-Indian staff members received in-service training to familiarize them with Navajo culture. Deborah House writes:

“The role of Rough Rock Demonstration School as a model for other tribal education programs cannot be overemphasized. It was the school that established the legal precedent for the right of the federal government to give funds directly to local Indian communities to run their own schools.”

In Arizona, the Havasupai began a community action program under the Office of Economic Opportunity. They also started a Head Start pre-school program.

In Arizona, the Pascua Yaqui Association under the leadership of Anselmo Valencia obtained a grant to start a Community Action Program under the Office of Economic Opportunity. With this grant the Pascua Yaqui organized a project to train tribal members to build their own homes and then to purchase them with sweat equity. The new homes were built on a 200-acre parcel and became known as New Pascua.

In Idaho, an Indian branch of the Mormon Church was opened on the Fort Hall Reservation. In his book The Northern Shoshoni, Brigham Madsen notes:

“Apparently religion at the reservation had come full circle from a century ago, when the Latter-day Saints were under attack for proselytizing among the Shoshoni and Bannock.”

In Utah, the Shoshone members of the old Washakie Ward were transferred to the Mormon ward in Portage. Brigham Madsen reports:

“This action ended the formal Mormon Church support of a religion organization at Washakie, as nearly all the Indians had left the old settlement.”

In Florida, the Independent Big Cypress Mission was founded as a mission to the Seminole.

In South Carolina, the grave of Seminole war leader Osceola was vandalized. The vandals tunneled beneath the grave’s enclosure with the intention of taking his bones back to Florida.

In California, the Cahuilla won a judgment against the city of Palm Springs with regard to zoning matters. The city had passed a zoning ordinance and a master plan which had included control over Indian land in the city.

In Oregon, the U.S. District Court, in Confederated Tribes of Umatilla Indian Reservation v. Maison, upheld treaty rights to hunt on unclaimed land in the Matilla and Wallowa-Whitman nations’ forests without restriction by the Oregon Game Commission.

In Oklahoma, the Cherokee filed a suit which asserted that riverbeds belong to the Cherokee. The suit was against the state of Oklahoma, 16 oil companies, and 2 sand and gravel companies.

In Texas, Tom Diamond, the attorney for the Tigua, notified the city of El Paso that tribal members would no longer be responsible for taxes to any local division of government. The notification was based on the fact that the Texas Legislature in 1854 recognized that the Tigua held title to the Ysleta Land Grant. Local authorities were cooperative and receptive to the Tigua claim.

In Texas, a study by University of Arizona anthropologist Nick Houser showed that the Tigua were still a culturally distinct Indian tribe. The Texas State Historical Survey Committee acknowledged the accuracy of the report and passed a resolution stating that the tribe was entitled to federal recognition.

In Oklahoma, the Bureau of Indian Affairs recognized the Comanche Tribe of Oklahoma as the political representative of the Comanche people.

In Montana, Percy DeWolf (Blackfoot)  and Jean A. Turnage (Flathead) were elected to the state senate.

Andrew Johnson and the Indians