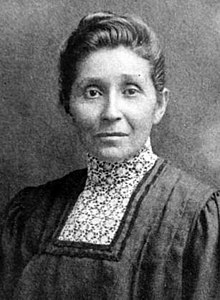 Susan LaFlesche was born on the Omaha Reservation in Nebraska in 1865. Her father was Joseph LaFlesche who had become the principal chief of the Omaha in 1854. Her father was what the Americans called “progressive” as he favored adopting American ways. He refused to allow his four daughters to be tattooed in the Omaha fashion as he wanted them to be able to freely mingle in Euro-American society. He also encouraged the Omaha to build houses in the American style and consequently she grew up in a frame house on a plot of land which was in her father’s name. In his biography of her in Notable Native Americans, Charles Cannon writes:

“Her family was Christian, influential, and respected, and emphasized the importance of education.”

One aspect of American society which Joseph LaFlesche opposed was alcohol. In 1856 he established an Indian police force for the purpose of eliminating alcohol on the reservation.

Joseph LaFlesche was the son of a French fur trader and a Ponca woman. When he married an Omaha woman he was formally adopted into the Omaha Elk clan and was thus considered to be Omaha.

Susan grew up speaking both Omaha and English. One of her brothers, Francis, became an ethnologist with the Bureau of American Ethnography; one sister, Susette, became an outspoken and well-known Indian rights activist; and another sister, Marguerite, became an educator.

Susan’s formal education began in the Presbyterian Mission School on the Omaha Reservation. In 1879, Susan and her sister Marguerite entered the Elizabeth Institute for Young Ladies in Elizabeth, New Jersey.

She returned to the Omaha Reservation in 1882 and worked at the mission school. Among her duties was some of the younger students.

In 1884, Susan and Marguerite enrolled in the Hampton Normal and Agricultural Institute in Hampton, Virginia. Hampton had been established for the education of free slaves and welcomed Indian students. Samuel Chapman Armstrong, the founder of the Hampton Institute, wrote about educating Indian children:

“Savages have good memories; they acquire but do not comprehend; they devour but do not digest knowledge. They have no conception of mental discipline.”

She graduated from Hampton in 1886 and was the salutatorian at the graduation ceremony. She advocated the assimilation of Indians into Euro-American culture:

Susan had always wanted to become a doctor and her teachers encouraged her to go on to medical school. However, the cost of medical school was a significant barrier. The Connecticut Indian Association agreed to pay for most of her education and they persuaded the Indian Office (as the Bureau of Indian Affairs was then called) to continue to provide some support.

The Women’s Medical College of Pennsylvania in Philadelphia admitted Susan as a beneficiary student. It was unusual for women at this time, let alone Indian women, to enroll in medical school. Medical education was strictly segregated by gender. Charles Cannon reports:

“When not busy studying, she exhibited her community-oriented nature by speaking to church groups and visiting the Lincoln School for Indian children near Philadelphia.”

Susan graduated in 1889 at the head of a class of 36 women. She returned to Nebraska as the physician at the government boarding school. She was soon seeing adults as well as children as she spoke their language. When the government physician left, she was placed in charge of the health care for the 1,244 tribal members. In his book Who Was Who in Native American History: Indians and Non-Indians From Early Contacts Through 1900, Carl Waldman reports

“…La Flesche served as the reservation doctor for the Omahas, seeing hundreds of patients and helping stem influenza, dysentery, cholera, conjunctivitis, typhoid, and tuberculosis, all chronic to the reservation.”

In 1891, influenza struck the reservation. Traveling throughout the rural area of the reservation, she treated 114 patients in a single month. Travel from house to house was generally by horse and buggy and often over rough terrain. If the patient was only a mile or two away, she would often walk.

In 1893, she resigned from her position as the government physician to the reservation. Her health had declined to the point where she felt she could no longer do the work required. The following year she became engaged to Henry Picotte (Sioux), the brother of her sister Maguerite’s late husband.

Like her father, she was concerned about the impact of alcohol on the Omaha people. Like many women of this time—both Indian and non-Indian—she became involved with the temperance movement. She wrote:

“Men and women died from alcoholism, and little children were seen reeling on the streets of the town. Drunken brawls in which men were killed occurred and no person’s life was considered safe.”

Her concern for alcohol became much more personal as her husband’s drinking increased. In 1905 her husband died from complications from drinking. She was left as the sole support of an invalid mother and two small children.

The following year, she purchased a house lot in the newly formed town of Walthill, an alcohol-free area, and built a modern home. She moved into this home with her two children and her mother.

Even though she was no longer the government physician for the reservation, she continued to help the people with her medical skills. She was one of the organizers of the Thurston County Medical Association and advocated for a hospital in Walthill. The hospital became a reality in 1913 and was opened for the treatment of both Indian and non-Indian patients.

Susan LaFlesche Picotte died in 1915 at the age of 50. The hospital which she helped to create was renamed in her honor. Charles Cannon writes:

“She was a symbol for many marginalized groups who sought empowerment in the nineteenth century. She was a shining light not only for the Indian rights movement, but for the women’s movement as well. She was ahead of her time as a Native American activist because she was among the earliest Indian leaders to look beyond the interests of her own tribe and address the broad issues facing Native Americans in general.”