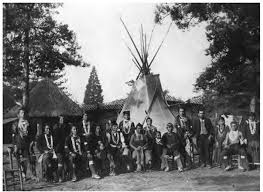 In the eighteenth and nineteenth centuries, the Omaha Indians were living in what is now Nebraska where they were a farming people who engaged in buffalo hunting. The Omaha fields would be planted in May and tended until the corn was well established, usually late June or early July. Then the entire village would leave on the summer buffalo hunt and return to harvest the corn in September and October.

One of the principle features of Omaha social organization was the patrilineal clans. These clans were named, and membership was through the father, that is, each person belonged to the father’s clan.

The Omaha had a central government which was composed of a council of seven chiefs who were overseen by two principal chiefs. Decisions made by the council had to be unanimous. Each of the chiefs was the leader of a clan which possessed a pipe. The number seven is a sacred number because it is made up of the four cardinal directions plus up, down, and the place in the center where all directions meet. Noting the importance of the two pipes in Omaha government, ethnographers Alice Fletcher and Francis La Fletche, in their 1911 book The Omaha Tribe, wrote:

“The retaining of the two Pipes as the supreme or confirmatory authority within the council rather than giving that power to a head chief was consonant with the fundamental idea embodied in the tribal organization.”

“None of these five keepers had a voice in the decisions of the council, the responsibility of deciding devolving solely on the Seven Chiefs who composed the council proper.”

At the Omaha council meetings, one of the members would raise an issue or question. It would then go around the circle, starting with the man next to the man who had introduced the issue. The matter would pass around and around the circle until all came to an agreement. It was not uncommon for an entire day to be spent in deliberation in this fashion. In making a decision, ethnographers Alice Fletcher and Francis La Flesche report:

“All must accept it and then carry it through as one man. This unity of decision was regarded as having a supernatural power and authority.”

In addition to the seven clan chiefs and the two principal chiefs, there were two other orders of chiefs among the Omaha. There were an unlimited number of lower chiefs known as Brown Chiefs (Ni’kagahi xu’de) and a higher and more limited number of Dark Chiefs (Ni’kagahi sha’be). To become a dark chief, there were seven grades which a man had to pass through. The first of these was to obtain the materials for the staff carried by the leader of the buffalo hunt. The seventh grade involved the giving of gifts to maintain peace in the tribe. When a man had done a hundred of these acts of gift giving, he was eligible to join the Night Blessed Society and to have his daughter tattooed.

With regard to law, accusations of serious wrongdoing, such as murder, were not taken lightly. Many of the tribes safeguarded the social order with some form of punishment. Among the Omaha, for example, there was in the Tent of War a staff of ironwood which had a rough end. Rattlesnake poison was placed on this rough end and a person who was guilty of a major offense would be prodded with the stick, usually resulting in the offender’s death. This punishment was decided on by the council and carried out by a trustworthy man. One of the offenses punished in this way was making light of the authority of the chiefs.

Among the Omaha, deliberate murder was punished by banishment for four years. During this time the murderer had to camp outside of the village and was to communicate to no one. The offender was also required to wear a special garment which was not to be removed during the period of banishment. After the chiefs passed the sentence of banishment, they would take the Sacred Pipes to the murder victim’s family. They would present the family with gifts and ask that they not seek any further punishment on the murderer’s family.

Among the Omaha, the true function of war was to protect the people from outside enemies. Ethnographers Alice Fletcher and Francis La Flesche report:

“Aggressive warfare was to be discouraged; any gains made by it were more than offset by the troubles entailed.”

It was, however, difficult to stop the young men from going to war. However, there were steps that had to be taken. A younger man would go to one of the keepers of a war bundle and invite him to a ceremonial feast. By obtaining the permission of the war bundle keeper, the leader of the war party was relieved of any responsibility should a member of the party be killed. Chiefs were required to use their influence for peace and could not initiate war parties.

During the nineteenth century, Omaha war parties tended to be small: 10-15 warriors. The war party would usually leave the village at night. The warriors would wear no feathers or ornaments. When returning from a successful battle, the war party would light a fire near the village to signal their return.

The Omaha recognized six grades of war honors which could be taken from the body of an enemy:

Among the Omaha, warriors who were recognized for their bravery were allowed to wear a Crow Belt bustle: two trailers of hide covered with feathers hung from the belt and eagle wing pointer feathers protruded upward from the base of the bustle. In an essay in Painters, Patrons, and Identity: Essays in Native American Art to Honor J.J. Brody, Aaron Fry describes the bustle:

To be able to wear the Crow Belt, a warrior had to be the first to strike an unwounded enemy in battle; to be the first to touch a fallen, live enemy; to be the second to touch a fallen, live enemy; and then to repeat all three of these deeds of valor. The Crow Belt, originally created when the Omaha, Osage, Quapaw, and Kansa were living as one tribe, represents the mythic relationship between the warriors and their patrons, the wolf and the crow.