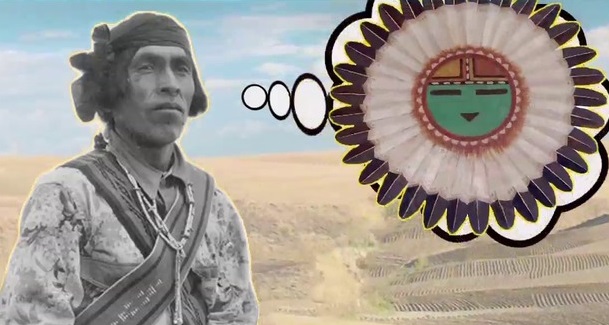 Under the IRA each “tribe” (“reservation”) was to vote on whether or not they wanted to reorganize. In 1936, the Hopi in Arizona voted on reorganization under the IRA. Only 20% of the Hopi turned out to vote and less than 15% of the total population actually supported reorganization. Harry James, in his book Pages from Hopi History, writes:  “When the final vote was taken, the Hopi who opposed the establishment of a tribal council were true to their traditional procedure in such matters and simply abstained from voting either for or against it.”

In other words, the Hopi “voted with their feet” by not participating in their election and in this way they demonstrated their opposition. While those familiar with traditional Hopi government recognized that only a small minority of the Hopi favored reorganization, the federal government, using only the numbers from those who actually voted, declared that the Hopi would be reorganized. Despite resistance to a unified Hopi government, a tribal council was established and all of the villages, with the exception of Oraibi and Hotevilla, sent representatives. The new government was the first time the Hopi had a central government and the new tribal council represented an alien way of life and government.

Hopi are a Pueblo people who have lived in permanent agricultural villages in present-day Arizona for more than a thousand years. The name “Hopi” is a contraction of Hopi-tuh which means “peaceful ones.” While the United States has insisted on dealing with the Hopi as if they were a single tribe, they have been, and continue to be, a collection of independent, autonomous, and self-governing villages. Each of the Hopi villages has traditionally been self-governing, though the form of village government is similar in all villages. In an article in North American Indian Anthropology: Essays on Society and Culture, anthropologist Triloki Nath Pandey writes:   “There is no central authority for the Hopis as a whole. Within each major village there is a hereditary group of priests or chiefs.”

While the Hopi villages were tied together by a common language and religious beliefs, people identified themselves by their village. The concept of “Hopi” indicated a culture, but not a governmental entity.

The traditional Hopi villages were ruled by clan theocracies in which the kikmongwi (high priest) served as the father of the village as well as the priest for the most important village ceremony. In the Hopi village of Oraibi, for example, the kikmongwi was the head of the Bear Clan and the chief priest of the Soyal ceremony. The kikmongwi would usually appoint at least one spokesman who would speak for him.

Hopi clans, by the way, are matrilineal, which means that each person belongs to the mother’s clan. Each of the clans has its own ceremonies and its own history.

The primary role of the kikmongwi was to ensure the success of the crops and thus the well-being of the villages by carrying out ceremonial obligations. Political authority focused primarily on resolving disputes regarding land use. The kikmongwi leads by examples of humility, hard work and good thoughts. If a chief fails to follow the proper path, the Hopi are quick to criticize him, reminding him of the ancient principles.

Each Hopi village also had a qaletaqmongwi or war chief who was responsible for enforcing internal social order and for dealing with external affairs.

The town crier in each Hopi village would inform the people about village events. In The Hopi Indians of Old Oraibi: Change and Continuity , anthropologist Mischa Titiev, writing about Oraibi, notes:  “Some of the ordinary announcements they make suggest that they occasionally act as agents to maintain discipline.”

The village government was formed by the leaders – Crier Chiefs, Kiva Chiefs, and others – with clan relationships indicating governmental positions. According to writer Catherine Feher-Elston, in her book Children of Sacred Ground: America’s Last Indian War:  “It is true that the priests, religious leaders, warriors, and kikmongwis would listen to various opinions before making decisions, but government was not necessarily by consensus.”

After tribal reorganization in 1936, with a tribal government formed according to a constitution and bylaws written for them by anthropologist Oliver LaFarge, everything was supposed to change. However, the villages have continued to be self-governing, often ignoring the existence of a tribal council.