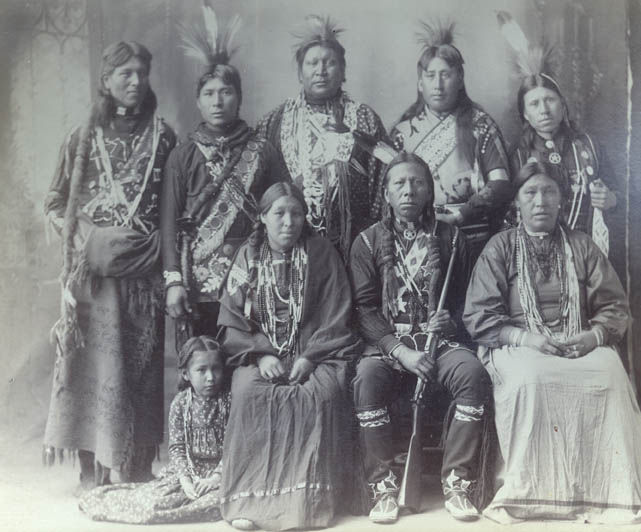 Anthropologists have long used the Omaha as the classic example of a family structure which is centered around a patrilineal clan. The Omaha clan is a named, extended lineage in which members observe common restrictions concerning food and have certain ritual obligations because of clan membership. Clans were exogamous, meaning that one could not marry someone from the same clan. There was also a prohibition from marrying within the mother’s clan. Membership in the clan is through the male line (patrilineal descent) which means that each individual, male or female, belongs to the father’s clan.

Among the Omaha, the ten clans were divided into two moieties: the Sky People and the Earth People. The Earth People were in charge of the physical welfare of the people, while the Sky People were the custodians of ceremonies relating to creation, the stars, and cosmic forces. While the Omaha clans were exogamous, the Omaha moieties, were not required to be exogamous. However, marriage outside of one’s own moiety was considered to be ideal.

During the buffalo hunt camps, the Sky People would camp in the northern half of the camp circle and the Earth People in the southern half. The Earth People included the Elk Clan (which controlled the sacred tent of war and war ceremonies), the Buffalo Clan (also called the Black Shoulder Clan), the Leader Clan (this clan traditionally provided the keepers for the tribe’s sacred objects), To the Left of the Leader Clan (this was a collection of sub-clans), and Kansa Clan. The Sky People included the Gray Wolf Clan (also known as the Earth Maker Clan), the Buffalo Tail Clan, the Deer Head Clan, the Red Newborn Buffalo Calf Dung Clan, and the Flashing Eyes Clan.

With regard to marriage among the Omaha, Bradley Ensor, in an article in Ethnology, reports:

There were times when a marriage was arranged by the girl’s parents. In an arranged marriage the groom was usually a mature, established man who paid a bride price.

In their entry on the Omaha in the Handbook of North American Indians, Margot Liberty, Raymond Wood, and Lee Irwin write:

“Most marriages took place through elopement, which was confirmed when the couple returned to the lodge of the husband’s father, where a feast was held and gifts were exchanged between the two families.”

Divorce was common and the children and the home remained with the wife.

When a young man married he lived with his wife’s family until the birth of their first child. Then he and his family would return to his father’s home where he would live.

A man was obliged to marry his brother’s widow. Ethnographers Alice Fletcher and Francis La Flesche, in their 1911 book The Omaha Tribe, report:

“Should he fail in this respect, he was liable to suffer in person or property, either by the act of the woman herself or by that of her near kin, in order to force him to recognize or make good her rights.”

The Omaha had a number of in-law avoidance practices. According to R.H. Barnes, in his book Two Crows Denies it: A History of Controversy in Omaha Sociology:

“A man would not speak to his wife’s parents or grandparents but had to converse with them by addressing his wife or child and requesting them to repeat the question or statement. A reply would be made through the same channel.”

The birth of a child was seen as more than an addition to the clan and tribe. Ethnographers Alice Fletcher and Francis La Flesche report that a child is

“a living being coming forth into the universe, whose advent must be ceremonially announced in order to assure it an accepted place among the already existing forms.”

Voluntary Associations Among the Omaha Indians

A Brief Overview of the Omaha Indians