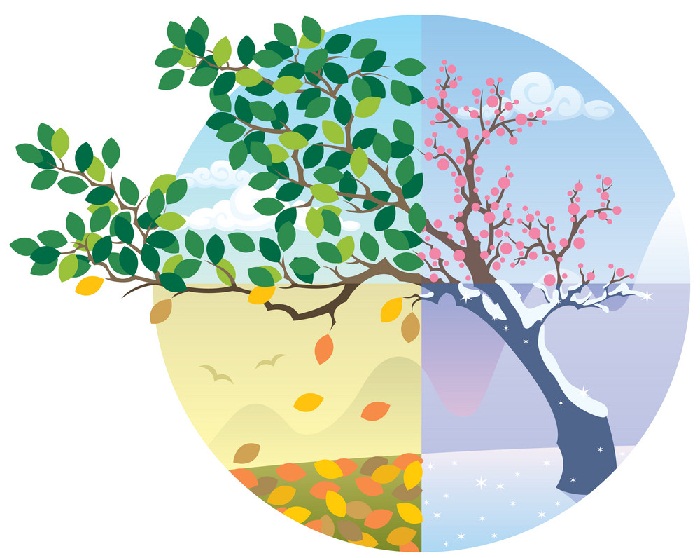 In traditional cultures, the cycle of the seasons was-and often still is-recognized and celebrated with ceremonies. These ceremonies are a way of obtaining and maintaining harmony with the natural world. For humans to live in health, happiness, and harmony, they must be in tune with the continually changing world around them. This diary is going to look at the Cycle of the Seasons.

Wellbriety is a concept which grew out of attempts to bring sobriety to American Indian alcoholics and drug addicts. In order to bring about long-term sobriety, long-term changes in addictive behaviors, the entire community needs to embrace wellness-to obtain wellbriety. Wellbriety is a community approach which incorporates traditional Native American world views.

Wellbriety views the Medicine Wheel as a circle of teaching that explains that anything growing is a system of circles and cycles:

One of these is the cycle of seasons: spring, summer, fall, and winter. Another is the cycle of life: baby, youth, adult, elder. On a personal level, the four directions of human growth are emotional, mental, physical, and spiritual.

The Cycle of the Seasons in Native Cultures:

In traditional cultures, the cycle of the seasons was-and often still is-recognized and celebrated with ceremonies. These ceremonies are a way of obtaining and maintaining harmony with the natural world. For humans to live in health, happiness, and harmony, they must be in tune with the continually changing world around them.

The Tohono O’odham are an agricultural people who farmed in the Sonoran desert of Arizona and Sonora, Mexico. At the beginning of the rainy season in July they hold the Saguaro Festival to bring rain to the desert. As a part of the ceremony, cactus wine – tiswin – is made and consumed.

In the Saguaro Festival, the local village representative plus three guests occupy four directional positions representing the rain spirits of these directions. Cup bearers then bring the tiswin. They drink a portion of it and sing four rain songs. They then dip their fingers into the gourd and sprinkle the beverage on the ground to symbolize rainfall. The first night of the festival is called “sit-and-drink” and during this time ritual speeches are made. Following this everyone consumes the tiswin until it is gone. In the words of one woman:

“People must all make themselves drunk like plants in the rain and they must sing for happiness.”

The seasons are marked not only by the changing weather patterns, but also by changes in the sun, the moon, and the stars. For many Indian groups in the Southeastern Culture Area, the movement of the stars through the seasons are viewed as a celestial canoe. The Alabama, for example, call the bowl of the Big Dipper the Boat Stars while their Creek neighbors call this Pilohabi, meaning “image of a canoe.”

Traditionally the Iroquois (Oneida, Onondaga, Mohawk, Cayuga, and Seneca) would hold a nine-day Midwinter Ceremony to close out the old year and to bring in the new year. The ceremony began five days after the first new moon following the zenith of Pleiades. The teachings of Handsome Lake, however, say that the ceremony should start five days after the first January new moon. The timing of the ceremony with the zenith point of the Pleiades has an important association. During the ceremony people are dancing on earth when the line of communication with the sky realm is open directly above and while the sky spirits are also dancing .

The first part of the Midwinter Ceremony is concerned with curing, dream fulfillment, renewal, and personal well-being. This was a time for the cleansing of thoughts, not of deeds. It was a time when the fears and worries of the year were bought into the open and cured. The second part of the ceremony was concerned with sacred rituals and food spirit observations.

Among many of the Indian nations of the Northwest, the year was divided into two periods. The non-ceremonial or secular time was from March to November when the people were primarily occupied in fishing, hunting, and gathering. The Kwakiutl call this Bakoos time. Nuu-chah-nulth artist and ritualist Ki-ke-in writes:

“To continue this good life, we as kuu-as (real living human beings) must follow a disciplined schedule and observe our sacred practices governed by lunar and seasonal cycles.”

One of the ceremonies found among the Indian nations of the Northwest coast is the First Salmon Ceremony. The salmon are beings who live like people in their own world and each year they appear as fish to give their flesh to humans. The salmon, therefore, are treated with special reverence and a ceremony is held at the first catch to honor the salmon and to encourage its abundance. This ceremony serves to remind the people of the rhythmic cycles in nature and the interdependence of all beings.