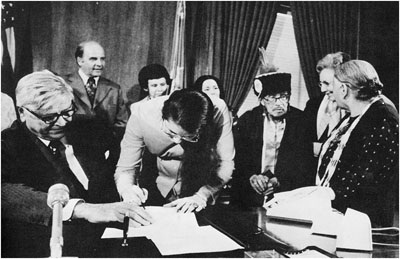 Following World War II, the United States wanted to get out of the Indian business: that is, to sever all relationships with Indian tribes. In the spirit of assimilation and with the intent of reducing government’s role in Indian affairs, Congress passed the Indian Claims Commission Act in 1946 as a vehicle to extinguish all pending Indian claims and thus end the federal government’s obligation to provide support for the tribes. In other words, it would act as a kind of severance package which would help Indians to abandon their collective traditions and enter into American society as individuals.

In 1951, the Menominee were awarded $8.5 million to settle historic grievances regarding the mismanagement of their timber resources. Being awarded the money, however, does not mean receiving the money. Before the Menominee can receive this money, it must first be appropriated by Congress.

Two years later, without consulting any Indians, House Concurrent Resolution 108 called for the termination of Indian tribes. The Resolution called for the unilateral withdrawal from treaty obligations to Indian nations as soon as possible. Utah Senator Watkins was one of the leaders of Indian termination in Congress. He felt that the 1924 citizenship act had ended all special federal relationships with Indian tribes.

The Resolution also called for the rapid termination of five large tribes-Flathead, Klamath, Menominee, Pottowatomie, and Turtle Mountain Chippewa. The United States, and the west in particular, was in the midst of an economic boom and non-Indian economic interests wanted to open up Indian reservations for corporate economic development. Two of the reservations singled out for termination-the Klamath and the Menominee-just happened to have timber resources which corporate interests desired.

In 1954, the Menominee were officially terminated by the federal government. Prior to termination, the Menominee had timber which had been valued at $36 million in 1936.  Each tribal members was to be paid $1,500 of tribal money and the tribe was required to pay for the administrative costs of termination. In voting for termination, many tribal members thought that they were voting on the distribution of the money which they had been awarded. The impact of termination was a fast slide into poverty.

Menominee Enterprises, Inc. (MEI) was created to oversee Menominee resources and tribal assets. All tribal members became MEI shareholders, but they had little control over the organization. The board of directors was composed of both Menominee and non-Menominee with a majority of the board being non-Menominee. The Indians were told that this is to show the state that MEI has stable management.

By 1961, MEI was administering all tribal assets, including land, forest, and the sawmill. Each of the 3,270 tribal members received a receipt for 100 shares of common stock in MEI. The actual shares, however, were issued to the corporation’s Voting Trust, which was empowered to elect the MEI Board of Directors.

The First Wisconsin Trust Co. of Milwaukee was assigned guardian powers to act as a trustee for all tribal minors and incompetents. Tribal members could be determined to be incompetent by the Secretary of the Interior without any judicial hearings and legal process.

In 1969, the Menominee Indian Study Report found that the state had gained ownership of more than a million dollars of Menominee income bonds as needy families were required to assign their bonds to the state in order to receive welfare.

With regard to DRUMS in Menominee County, Chicago chapter president Jim White reported:

“We figured that MEI would threaten and harass people in Menominee County with loss of jobs if they started a local Chapter, so we knew it would be difficult to organize up there.”

At the first DRUMS meeting in the county, MEI hired 25 millhands to break up the gathering. In spite of death threats, the DRUMS chapter was organized and Laurel Otradovecs is elected president.

In the years that follow, many of the tribes which were terminated during this era have their federal recognition restored.