Friends: By now, you’re most likely aware of the ridiculous $250M defamation lawsuit filed against The Washington Post on behalf of Covington Catholic High School student Nick Sandmann’s family in the wake of his confrontation with Omaha elder Nathan Phillips following the Indigenous Peoples March in Washington, D.C. on Jan. 18.

Unsurprisingly, the media picked up immediately on the story of kids in MAGA hats surrounding Nathan—as one, Sandmann, “stood his ground” with a smile he said was “confident” (but others have characterized as something else entirely) while his classmates performed a tomahawk chop. What that moment represented was all too clear to anyone familiar with the long, painful history of racism and genocide against Indigenous people and the revival of racially-charged rhetoric in Trump’s America. 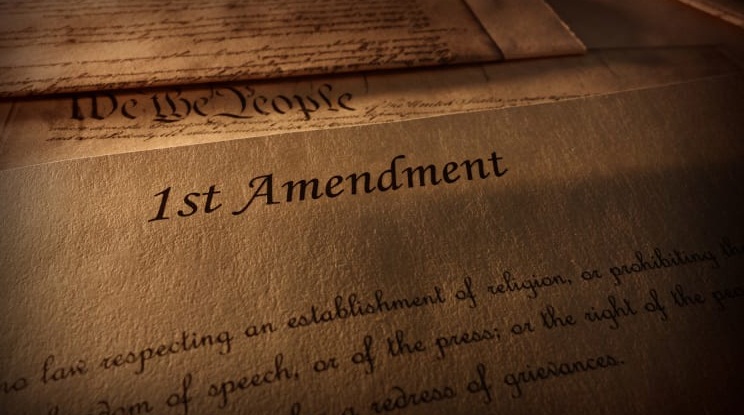 Now, a lawyer with a history of attacking the First Amendment is turning what should be a teachable moment for the kids—and for all of us—into an opportunity to increase his fame and wealth with another broadside against the United States Constitution. Shameful, and dangerous.

We know the press is one of Trump’s favorite punching bags, because, hey, if you are a habitual, casual liar in the world’s most influential position, it only makes sense to denigrate those dedicated to truth and checking abuses of power. The irony is evident, of course, when so many right wing talking points center around a supposed abiding love for our founding documents.

Taking his cues from Trump, this lawyer has renewed his fight against free speech, but our legal team won’t sit idly by and watch that happen. What follows is our Lakota People’s Law Project legal team’s analysis of this bogus filing (cross-posted from our website). Please share widely with anyone who truly values the First Amendment, the principle of equality for all, and the love of our union. And please also sign and distribute our letter in support of Nathan Phillips—the battle is brewing and we need to gather our forces, just as the other side is doing. Happy reading, and long live truth!

OUR REBUTTAL OF WAPO CIVIL SUIT

The lawsuit filed on February 19, 2019 against the Washington Post for defamation in relation to the incident that occurred on January 18th, 2019 at the Lincoln Memorial involving Nathan Phillips and Nicholas Sandmann presents an entirely one-sided interpretation of the facts surrounding this affair.

The attorney who filed the complaint, who has a long track record of suing major national news media, is on record declaring that “the pendulum has swung too far in favor of the First Amendment.”

Nathan Phillips, a Native American who, during a legitimate, permitted exercise of political speech at the Lincoln Memorial, found himself in the midst of a racially-charged, hostile exchange between approximately 100 white, male students from Covington Catholic High School and a group of African American “Black Hebrew Israelites,” had every right, when asked by news media, to provide his interpretation of what occurred that day. And news media had every right to cover, in real time, his interpretation of those events.

The Washington Post endeavored to accurately tell the events that occurred at the Lincoln Memorial, and, over time, made every effort to provide needed corrections to stories as new facts surfaced about the incident. This served the public interest in laudable fashion. Our nation must recognize that the process of reporting on complicated issues such as race relations is an inherently difficult business. The evidence shows that reasonable efforts were made to report accurately in real time — and that additional efforts were made to correct or expand reporting so as to tell the entirety of the incident.

The Lakota People’s Law Project maintains that, in an era in which: 1) Donald Trump regularly uses racial slurs to publicly attack opposing political candidates and vulnerable populations, including slurs that make light of genocidal acts against Native Americans; 2) liberal demonstrators and neutral media personnel are publicly derided and sometimes assaulted at Trump rallies; 3) marchers opposing white supremacy are intentionally, sometimes fatally, run over by cars… only to have Donald Trump argue afterwards that “there are some very fine people on both sides” of such an affair — in such an era, an incident like the one that occurred at the Lincoln Memorial takes on unusual significance. There can be no equivalence drawn between Trump MAGA hats and Obama HOPE hats, when race is the topic under discussion, and yet that is what the complaint does.

Context matters, as does interpretation. The Lakota People’s Law Project harbors no illusion that our team will ever agree with many Trump supporters about how to interpret the meaning of the facts that occurred on January 18th. Just as we view in a special way the moral implications of the reduction of the American Indian population by as much as 90% between 1492 and the present (the particularity of our opinion here is shown by that Covington youth’s comment, at the Lincoln Memorial, that “Land gets stolen, it’s how it works”), we expect to forever view what happened in the shadow of a statue of Abraham Lincoln last month in a certain way. The important questions for the moment, given the democratic nature of our country, are: how would a majority of Americans view the incident after full exposure to the relevant facts, and, more pointedly, to what extent should our courts be enlisted to try to impose—in a most brutal fashion—one interpretation over another on members of the media?

Nathan Phillips has never threatened a lawsuit against anyone. This is so despite the fact that he was forcibly removed from his Native mother’s custody early in his life and abused in a white foster home until he was old enough to join the military. This is also so despite the fact that, given the way our president treats First Nations people, it is entirely understandable that Mr. Phillips perceived the behavior of the MAGA hat-wearing Covington youth in D.C. as a contributing factor in a volatile situation that made Phillips extremely uncomfortable, and, hence, he decided to take nonviolent action to try to defuse a tense situation. As we have begun now to wade into the details of what occurred on January 18th, let us turn to a detailed analysis of many of the assertions that have been made in the complaint filed against the Washington Post by a well-known critic of the First Amendment. But, first, here is a video that our Lakota People’s Law Project has assembled, which amounts to a retort to the video so ostentatiously trumpeted by Mr. Sandman’s attorneys in their complaint as an unimpeachable presentation of the “facts”—and here is a letter of support for Nathan Phillips that we have been circulating, which includes a description of the incident at the Lincoln Memorial that we believe a majority of America’s citizens would side with, after considering all the available evidence.

In sum, the Lakota People’s Law Project recognizes this ongoing public debate for what it is: a disagreement over the significance of facts, rather than a significant disagreement over facts. And it is absurd—worse, it is bullying—to sue a major American newspaper over the perceived failure to always, at every moment, report 100 percent accurately what happened at a given time and place in our nation’s capital. The Washington Post, like many other media outlets, grappled professionally and seriously with an iconic occurrence that transpired at the very location where Martin Luther King delivered his heroic “I Have a Dream” speech. Instead of suing one another, at this moment, we should all be straining to hear the echoes of what Martin Luther King was trying to teach us 56 years ago. Doubling down on errors of racial insensitivity—gaslighting our way to a morally grey future that fails to account for our dark past—is the worst of all possible courses of action to be taken…especially in pursuit of $250 million.

We never had a Native American woman in Congress, but with Deb Haaland’s win, we now have TWO