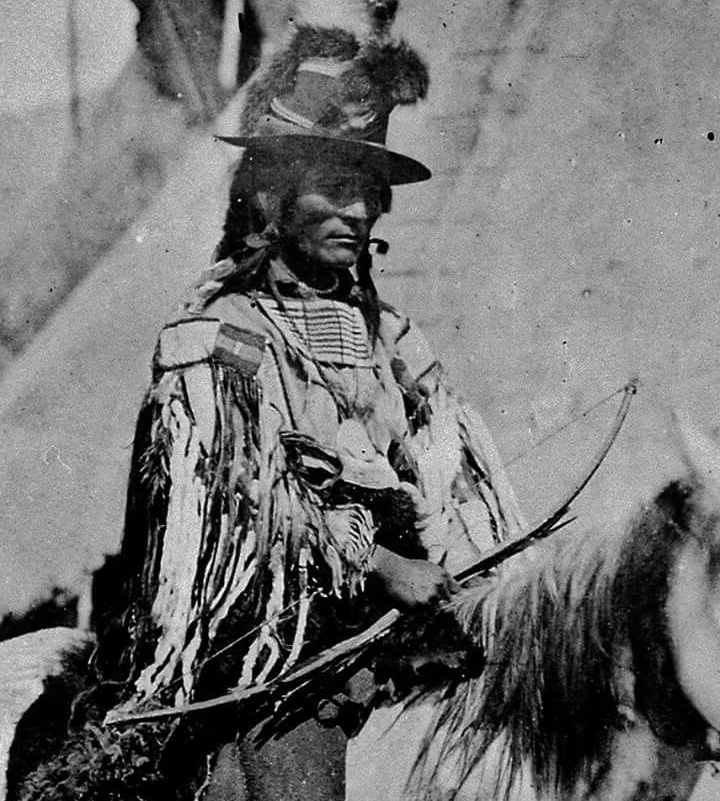 In 1877 the United States army under the leadership of America’s Christian general, O.O. Howard, went to war against the Nez Perce. The five autonomous non-treaty Nez Perce bands selected Looking Glass, the leader of the Asotin band, as War Chief.

With regard to the death of Looking Glass the Elder, the Washington Statesman in Walla Walla reported:

“This chief is the one that has created most of the disturbances that have existed in that tribe during the past few years, and by his death it is probable that these differences will be settled.”

“A proud and opinionated man standing six feet tall, Looking Glass was a warrior and a buffalo hunter who was familiar with the northern plains hunting grounds.”

By 1877, it was clear that the United States intended to go to war against the non-treaty Nez Perce bands and to force them to convert to Christianity. The non-treaty Nez Perce chiefs met in the Wallowa Valley, Oregon, to discuss what they could do to avoid war with the Americans. Among the chiefs in attendance were Chief Joseph, Eagle from the Light, Looking Glass, White Bird, and Toohoolhoolzote.

“I am here to put you on the Lapwai Reservation, and this I shall do or go to war with you.”

By the end of the council, all of the Indians were convinced that General Howard wanted to go to war against them and that he was only looking for an excuse. They were determined not to give him that excuse. Soon, however, Howard had the excuse he needed, and the war began.

Looking Glass was determined to stay out of the war. Most of the people in this band were Dreamers (members of the American Indian religious movement that the Americans had vowed to destroy) but Looking Glass had convinced them that they had nothing to gain by going to war. However, American soldiers were soon spotted moving toward his village.

Looking Glass sent a party to tell the soldiers that they were peaceful, but the soldiers wanted to kill Looking Glass and began firing in spite of the white flag. The soldiers rode into the Nez Perce village, shooting, rampaging, and looting. They destroyed everything they could and then set the lodges on fire. Thus, Looking Glass entered the war.

There were now five bands in the war, each with its own leader – Joseph, White Bird, Looking Glass, Toohoolhoolzote, and Husishusis Kute. There is no unified command. Each band was autonomous, and any warrior might follow any war chief. The primary focus of the chiefs was to simply stay out of the way of the army.

Following the Battle of Clearwater River in which the army opened fire with a four-inch howitzer and two gatling guns, a council of the chiefs discussed their options. Michael Turek reports:

“Looking Glass urged the people to cross the Lolo Trail and continue traveling east to the buffalo country of the Crow tribe, with whom they were friendly. He knew the country, having hunted buffalo with the Crows, and he believed they would welcome the Nez Percés.”

The council of chiefs and warriors selected Looking Glass to become their leader. With 200 warriors, 550 women and children, nearly 3,000 horses, and several hundred dogs, they started up the Lolo Trail across the Bitterroot Mountains and into Flathead territory in Western Montana.

In Montana’s Bitterroot Valley they met with the Flathead, their long-time allies and friends. When Looking Glass met with Flathead Chief Charlo, he extended his hand in friendship, but Charlo refused it. The Flathead refused to assist the Nez Perce and cast their lot with the Americans. However, the Flathead agreed to let the bands camp in the valley and pass through the area as long as it was done peacefully.

The Nez Perce passed through the Bitterroot without incident, purchasing supplies from some of the American stores. Following the advice of Looking Glass, the bands then dropped south to take the trail through the Big Hole valley and from there to the land of their old allies and friends, the Crow.

At the Big Hole in Montana, Looking Glass was convinced that they were far ahead of the army and were safe. Looking Glass did not post scouts at the camp. This camp site – called the Place of the Ground Squirrels – had been traditionally used by Nez Perce hunting parties on their way to the buffalo grounds. While many of the people – including the warriors – relaxed at this familiar place, Wotolen dreamt of many soldiers and some felt that this was a bad sign.

The army surprised them, and many Nez Perce were killed, including 12 of their best warriors. The people blamed Looking Glass for lulling them into a false sense of security. Poker Joe now assumed leadership.

After passing through Yellowstone National Park and evading the American army, the Nez Perce engaged in a battle with the 7th Cavalry at Canyon Creek north of the Yellowstone River. At Canyon Creek, a number of Nez Perce horses were captured by Crow warriors who were riding with the Americans. It was then clear that there would be no refuge among the Crow.

The Nez Perce chiefs decided to turn north, planning to join Sitting Bull’s Sioux in Canada. In council Looking Glass berated Poker Joe for pushing the people too hard. He argued that Canada—the Old Woman Country—was only a few days ahead and that the people needed short days and long camps to build their strength. Poker Joe argued that this was not the time to rest, but the other chiefs were convinced that there was no longer a reason to hurry. Poker Joe relinquished his leadership position to Looking Glass. Poker Joe tells Looking Glass:

“You can lead. I am trying to save the people, doing my best to cross into the Old Woman Country before the soldiers find us. You can take control, but I think we will all be caught and killed.”

A few miles from Canada, in the Bear Paw Mountains, the bands stopped to rest. Historian Jerome Greene, in his book Beyond Bear’s Paw: The Nez Perce Indians in Canada, writes:

“It was ground well known to them as Tsanim Alikos Pah (Place of the Manure Fires), and they knew that Canada lay but forty miles away.”

In the morning, Wotolen told the people that he had had a dream about this place and that in the dream the sky had been dark with the smoke of battle and that the waters of the creek were running red with blood.

Scouts reported that they had seen the troops coming and the Nez Perce began to hurriedly pack. Looking Glass told them that there was no hurry, that there was plenty of time. The 7th Cavalry, however, soon attacked, killing 22 Nez Perce, including Poker Joe.

The American siege on the Nez Perce camp lasted five days. In the final engagement, Looking Glass thought that he had spotted the arrival of Sioux reinforcements. He moved forward to verify this and was struck in the face by a soldier’s bullet and killed. He was the last warrior killed in the battle.