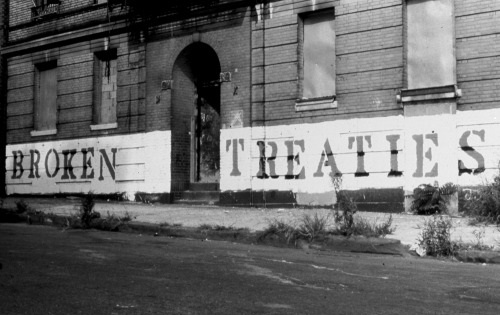 A treaty is an agreement between two or more sovereign nations. Under the U.S. Constitution, Indian tribes are considered sovereign nations-or as dependent domestic nations, in the words of the Supreme Court-and thus the United States negotiated treaties with the tribes in order to obtain title to Indian land and open Indian lands to non-Indian settlement.

Following the Civil War, Congress authorized the formation of a Peace Commission composed of three generals and four civilians to negotiate a series of treaties with the Indian nations. The Peace Commission sought to have the Indian nations settle on reservations away from the railroads and American settlements. These reservations were to be large enough to allow the Indians to continue to support themselves with hunting, but as they became more proficient as farmers, the size of the reservations was to be reduced. The government was also to provide the Indians with missionary instruction in Christianity. As a Christian nation, the United States felt that it had an obligation to convert Indians to Christianity and to prohibit aboriginal pagan religions.

In 1867, 4,000 Indians representing the Comanche, the Kiowa, the Kiowa-Apache, the Southern Cheyenne, and the Arapaho met with the United States Peace Commission at Medicine Lodge Creek, Kansas. Three treaties were negotiated with the tribes. The Americans wanted the tribes to agree to a reservation in Indian Territory and to surrender their own land claims.

Gifts for the Indians were stacked in dazzling piles. These included bushel baskets of glass beads, trinkets, knives, and surplus items from the Civil War. The surplus items included uniforms, blankets, and bugles. The Indians were allowed to look at the gifts but they could not touch them. The American strategy regarding gifts was simple: no treaty, no gifts.

Speaking for the Kiowa were Satank, Stumbling Bear, and Satanta. Ten Bears and Little Horn spoke for the Comanche, and Wolf’s Sleeve and Brave Man represented the Kiowa-Apache.

Kiowa leader Satanta told the Commission that he did not want to give any land away. He told them:

“I love the land, the buffalo and will not part with it. I don’t want any of the medicine lodges (churches) within the country.”

“A long time ago this land belonged to our fathers, but when I go up to the river, I see a camp of soldiers, and they are cutting my wood down or killing my buffalo. I don’t like that, and when I see that, my heart feels like bursting with sorrow.”

Newspaper reporter Henry Stanley, who was observing the council for the Daily Missouri Democrat, reported:

“Satanta’s speech produced a rather blank look upon the faces of the peace commissioners.”

“There is one thing which is not good in your speeches; that is, building us medicine houses.”

Communication at the council was a bit of a problem as not all of the translators are fluent in the native languages and part of the communication had to be done through sign language. In some instances, the translation went from English to Comanche via a translator who mumbled and then from Comanche to Kiowa with the resulting loss of a great deal of meaning. The Indian leaders probably understood little with regard to the nuances and legal ramifications of the treaty, but there were gifts, food, and pageantry.

Following the treaty signing, gifts were distributed to the Indians. Included in the gifts were some pistols of unknown manufacture. Each of these pistols exploded the first time they were fired. The shoddy pistols were, perhaps, a warning of things to come.

According to the treaties, annuities were to be paid to the tribes for 30 years. Annuity payments were to consist of one suit of woolen clothing for every male person and flannel, cloth, or calico for every female. An additional $25,000 in goods was to be spent as the Indian Service deemed necessary.

Under Article 12, further cessions of land could be made only with the consent of three-fourths of the male adult Indians.

In 1892, a commission headed by David H. Jerome (thus known as the Jerome Commission) obtained signed agreements with several Oklahoma tribes to obtain 15 million acres of land in an area known as the Cherokee Outlet. While the majority of the Indians opposed the land cessions, the Americans simply ignored their concerns and used a combination of lies, bribes, threats, and forgeries to obtain the agreements.

In the meeting with the Kiowa, Jerome explained that the United States wanted nothing from the Indians except to give them something more valuable than land: money. With regard to the actual amount of money, the commissioners avoided giving any details. Under the Jerome Commission agreement, the Kiowa would actually receive about $25 per person to sell the land, as compared with $33 for leasing the land.

To obtain the correct number of Kiowa signatures for the agreement, the government ordered Kiowa Indian soldiers to put their mark to the paper. Other signatures were simply forged. When confronted about this, Jerome simply reminded the Kiowa:

“Congress has full control of you, it can do as it is a mind to with you.”

He then threatened the Kiowa leaders with jail and dismissed them.

The agreement with the Kiowa, Comanche, and Plains Apaches was certified to have sufficient signatures to make it valid under the Medicine Lodge Treaty. However, even with the forged signatures, the document is between 21 and 91 signatures short of the number needed.

As Congress discussed the ratification of the new agreements, Indian leaders travelled to Washington, D.C. to protest the agreements and to lobby against ratification. They continually pointed out that the agreement had been made by means of fraud and coercion. Congress, however, ignored the Indian pleas and ratified the agreements.

In Lone Wolf versus Hitchcock the Supreme Court ruled in 1903 that Congress has the authority to break Indian treaties. While the 1867 Treaty of Medicine Lodge provided that no part of the Kiowa-Comanche Reservation could be ceded without the approval of three-fourths of the adult males, the Supreme Court ruled that Congress has the power to abrogate the provisions of the treaty. According to the Court:

“The power exists to abrogate the provisions of an Indian treaty, though presumably such power will be exercised only when circumstances arise which will not only justify the government in disregarding the stipulations of the treaty, but may demand, in the interest of the country and the Indians themselves, that it should do so.”

In this ruling, the Court removed tribal consent as a factor in the efforts of the United States to acquire more Indian lands.

In the case, the Indians argued that the agreement to sell their land had been obtained by fraud and that it did not have the requisite number of signatures as required by their treaty with the United States. The Court rejected these arguments in favor of near absolute federal power with regard to Indian affairs. Federal power, according to the Court, should be tempered by

“considerations of justice as would control a Christian people in their treatment of an ignorant and dependent race.”

For politicians in the western states, the Court’s ruling sent a clear message that they could use whatever means they wanted to dispossess the Indians of their land.