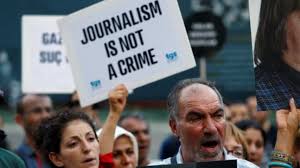 While reservations were lands which were initially reserved for exclusive Indian use, the United States has often administered these lands with the intention of assimilating the Indians into American culture. In dealing with the Indian nations, which the Constitution and the Supreme Court had declared to be sovereign entities known as “domestic dependent nations,” the United States government preferred to establish totalitarian dictatorships and to destroy any remnant of aboriginal democracy. The Bill of Rights, and the Constitution to which they were attached, were not seen as applicable on the reservations.

Freedom of the press is one of those ideals to which Americans often pay homage, but it has been a freedom which was often denied by the United States government to Indian nations. One example of this can be seen on the Chippewa’s White Earth Reservation in Minnesota.

In 1886, The Progress became the first newspaper published on the reservation. The first issue proclaimed:

“We shall aim to advocate constantly and without reserve, what in our view, and in the view of the leading minds upon this reservation, is the best for the interests of its residents.”

The paper also said that while it might be called upon to criticize individuals and laws, that freedom of the press will be “guarded as sacredly by the Government on this reservation as elsewhere.”

After the first issue of The Progress was published, federal agents confiscated the press and ordered editor Theodore Hudon Beaulieu and publisher Augustus Hudon Beaulieu, both tribal members, to be removed from the reservation. The Indian agent forbade the publication of the newspaper and charged that the newspaper had been distributed without the authority of the Secretary of the Interior, the Indian Commissioner, or the Indian Agent. Federal district court, however, ruled that The Progress could be published without interference and the second issue appeared six months after the first.

The second issue of The Progress stated:

The newspaper, however, continued to annoy the United States government by insisting that Indians had the right to management of their own affairs. Subsequently government agents seized and destroyed the paper’s printing press, effectively putting it out of business.

The Navajo, Sheep, and the Federal Government